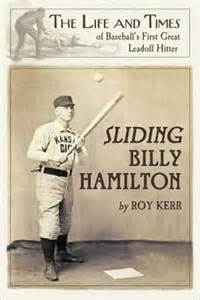 This article is about Billy Hamilton, a lightning-fast centerfielder known for his insane stolen base totals and stellar defense. He holds several stolen base records and is a member of the Hall of Fame in Cooperstown.

Wait, what? That is not the Billy Hamilton we know and love here in Redleg Nation. It turns out that there was another Billy Hamilton who was a very similar baseball player to our centerfielder and stolen base champion. He played from 1888 to 1901 and stole 937 bases, which is third on the all time list behind only Rickey Henderson and Lou Brock. He stole more than 100 bases several times and was considered an elite player by fans and media alike.

The original Billy Hamilton was short and solid at only 5’6″ tall and 165 pounds. He looks a bit stocky with short legs in his photos. In all honesty he doesn’t look like a speedster, but he certainly was as you’ll find out below. Compare that to our Billy Hamilton who is on the tall side at 6’0″ but onlyÃ‚Â 160 pounds and wispy thin. Our Billy looks like a prototypical speedster. The original Billy stole so many bases that he earned the nickname Sliding Billy, and we will call him that to distinguish him from the modern version. He was one of the first players to slide head first, gaining him some early notoriety. 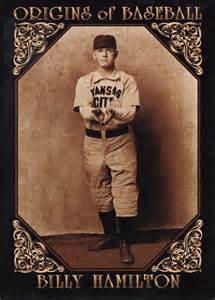 There are a lot of similarities between the two Billy Hamiltons. They both are fast, small centerfielders who steal a lot of bases. But Sliding Billy was also an excellent batter, one of the best in the league in fact. Maybe our Billy will become a goodÃ‚Â hitter one day but he has very little chance of becoming a truly feared batsman like his predecessor and namesake.

Sliding BillyÃ‚Â played his first two seasonsÃ‚Â for the Kansas City Cowboys, leading the league with 111 steals in 1889. We don’t know how many times he got caught because they didn’t record that information in those days. He also hit .301 and scored a whopping 144 runs. That marked the first of five times that Hamilton would lead the National League in stolen bases, and the first of four times that he would steal 100 or more. 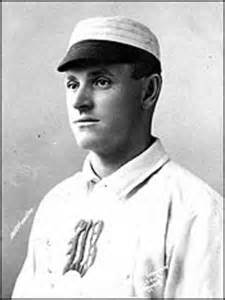 1894 was his best year ever. He batted .403, stole 100 bases and set an all-time record that still stands when he scored 198 runs in 132 games, which is 21 more than any other player has ever scored in a single season. Babe Ruth had the second-most runs ever in 1921 with 177. Sliding Billy hit .403 that year but did not lead the league, in fact he was one of four outfielders on his own team who all hit over .400 that season. All three starting outfielders on that Phillies team would make the Hall of Fame (Ed Delahanty and Big Sam Thompson being the other two, both of whom were tall and towered over the tiny Hamilton). Batting averages were high in those years for several reasons, especially because foul balls did not count as strikes until 1901, most players did not use mitts and if they did they were primitive, and because pitchers pitched very slowly (often underhanded or side-armed). Billy also stole seven bases in a single game that season, which remains a record to this day. 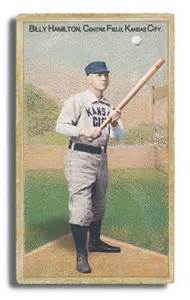 In 1895 Hamilton led the league one last time with 97 stolen bases. He would continue to post high batting averages and on-base percentages but the steals steadily declined as he grew older and slowed down. He played the last six seasons of his career with the Boston Beaneaters, who would go on to become the Atlanta Braves after changing names and cities several times.

Hamilton once led the game off with a home run and then hit a walk-off home run to win the same game. He is one of only five players ever to have done that. I wonder if one or both may have been inside-the-park homers. He only hit 40 homers in his career but hadÃ‚Â 95 triples. He also holds the record for most consecutive games with a run scored, scoring 35 runs over 24 games. He is one of only three players to ever score more runs than games played in his career. 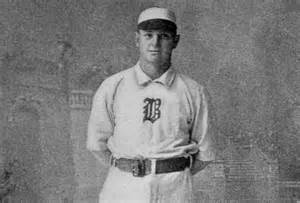 The exact number of steals in Hamilton’s career is disputed. His Hall of Fame plaque says 937, MLB.com and FanGraphs give him 912, Baseball-Reference and FanGraphs give him 914. Part of the trouble is that in those days there was no certified criteria for awarding a runner with a stolen base. Oftentimes a runner could getÃ‚Â credit for a stolen base for simply advancing on an error or fielder’s choice. That contributed to Ty Cobb being considered the all-time leader for many decades even though his total was significantly lower than Hamilton’s. Modern research has helped to eliminate the steals that would not meet the modern definition, leaving Hamilton with a true total in the 912-937 range using modern criteria.

Even though credit was publically (although erroneously) given to Cobb, Hamilton was in fact the all-time leader in stolen bases for 81 years until his record was broken by Lou Brock in 1978. Brock played until he had one more steal than Hamilton and then retired. Sliding Billy never held the record for steals in a single season because Hugh Nicol had previously stolen 138 bases in 1887, a mark that still stands. 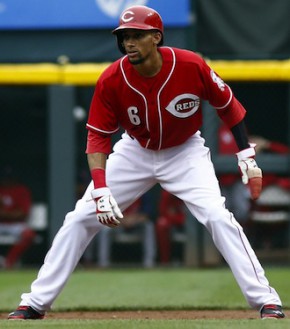 Our Billy Hamilton stole 155 bases in one season in the minor leagues. He may also lead the NL in steals for the first time this season. His 56 steals are five more than Marlins second baseman Dee Gordon has right now. 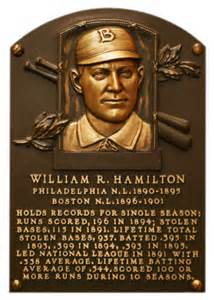 Hamilton was elected to the Hall of Fame in 1961, which was 21 years after he passed away in 1940. Hamilton didn’t live to see his greatness acknowledged when he was inducted into the Hall, but he didn’t lack an appreciation of his ownÃ‚Â skills. During the controversy over his career stolen base crown heÃ‚Â wrote a letter to the editor that was published in the Sporting News saying “I was and will be the greatest base stealer of all time.Ã‚Â I stole over 100 bases on many years and if they ever re-count the record I will get my just reward”. He was absolutely right. They did re-count and he was officially crowned as the all-time leader until he was passed by Lou Brock many years later. I wonder if he is the shortest member of the Hall of Fame. Heck, even Pee Wee Reese was 5’10”.