It’s a huge problem. Despite a growing awareness of the causes of ulnar collateral ligament (UCL) injuries and the new approaches many major league teams are taking to prevent them, the number of reconstruction surgeries remains significant. That raises important questions about how successful the surgery is, how quickly the pitchers who undergo the procedure return and how well can they pitch.

Getting Back to the Big Leagues

Before Tommy John surgery, blowing out a UCL was usually career-ending injury. Today, the vast majority of big league pitchers who have UCL reconstruction surgery return to the pitching mound. Research shows that 80 percent of pitchers who have undergone UCL reconstruction between the years 1999-2011 returned to pitch in at least one major league game. 67 percent of established pitchers returned to the same level of competition.

In recent years with modern surgical and rehabilitation methods, the rate of complete recovery has improved to nearly 90 percent. Most of the failures are with younger pitchers, where the issue isn’t the surgical procedure per se, but on the patient failing to complete the rehab protocol.

How soon can a player expect to return after Tommy John surgery?

Orthopedic surgeons, physical therapists and trainers have varying rehab protocols, although timelines are converging around a common best practices schedule. Typically, pitchers begin long tossing 4-5 months after surgery and build up to throwing normal bullpen sessions off a mound 8-10 months after surgery. 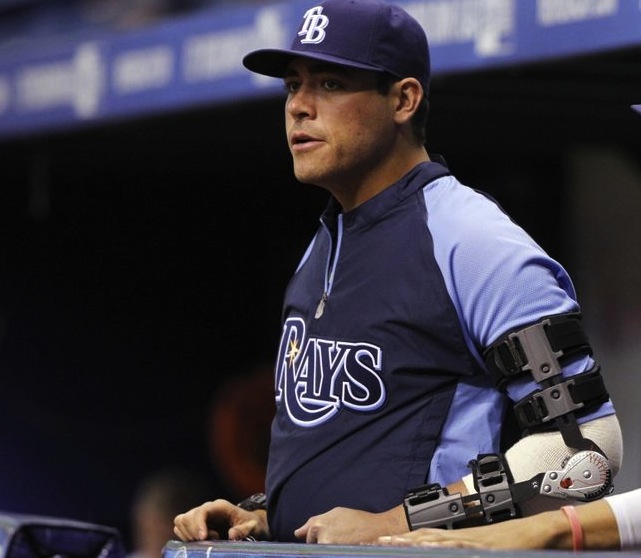 The normal course of return from TJS for major league pitchers has been 12-15 months. Some experts suggest a range of 9-12 months. For position players who have UCL reconstruction, like Zack Cozart in 2011 and Donald Lutz this year, the average return is in 6 months.

The headline pitchers who had TJS in 2014 and returned in 2015 followed that pattern. Jose Fernandez, Matt Moore (pictured above), Patrick Corbin, Ivan Nova returned to pitch in a big league game about 14 months after their surgery. Stephen Strasburg and Jordan Zimmerman returned 12 months after their TJS. Younger pitchers generally take more time than veterans.

Are pitchers the same when they return?

In a word, yes. The new ligament works similarly to the old ligament. Studies show that pitchers generally don’t hold back after surgery. The data indicates there is no difference in range of motion and other mechanical measures between pitchers who have had the surgery and their previous performance. When pitcher performance is compared to how they were pitching prior to surgery, they don’t drop off, taking normal aging effects into account.

Contrary to rumors, pitchers don’t have a better elbow after surgery compared to when they were healthy before surgery. The new ligament isn’t stronger than the original ligament when it was healthy. As Dr. Frank Jobe put it, the surgery “restores, that’s it.”

However, pitchers often do experience an increase in velocity. One reason is the pitcher may gain muscular (not ligament) strength from the aggressive post-surgical rehab program. Also, if the pitcher’s velocity had been declining as the UCL frayed before it tore, his velocity after surgery may be higher than it was when his elbow was unhealthy.

One surprising bit of good news for pitchers who undergo the TJ procedure is that they don’t experience the same year-to-year declines in velocity, strikeouts, nor increased walk rates compared to pitchers of similar age. Pitchers, like position players, operate on an aging curve. The solid lines in the chart below indicate the normal rates of decline in velocity (red line), strikeouts (blue line) and a rise in walk rate (yellow line) as they age. 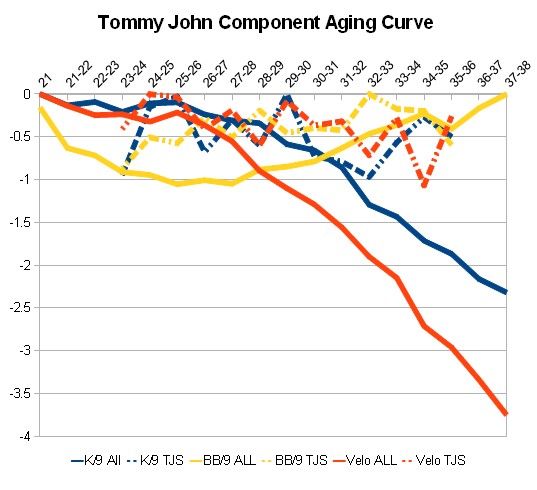 While there is variance from player to player, pitchers who have had TJS maintain their rates better, as demonstrated by the broken lines in the chart. Research shows that unlike the general pitcher population, TJS pitchers have flatter aging curves. Think of it as the new healthy ligament postponing the usual effects of aging on pitching performance.

Does Tommy John surgery impose a performance ceiling on pitchers, or can they still reach elite levels of durability and greatness?

Yes, there are many examples of pitchers who have overcome the surgery and joined the ranks of the most durable and best in the game. Adam Wainwright missed the 2011 season with TJS at age 29. He made 32 starts in 2012, 34 starts in 2013 and 32 starts in 2014. Wainwright finished second and third in Cy Young voting in ’13 and ’14. 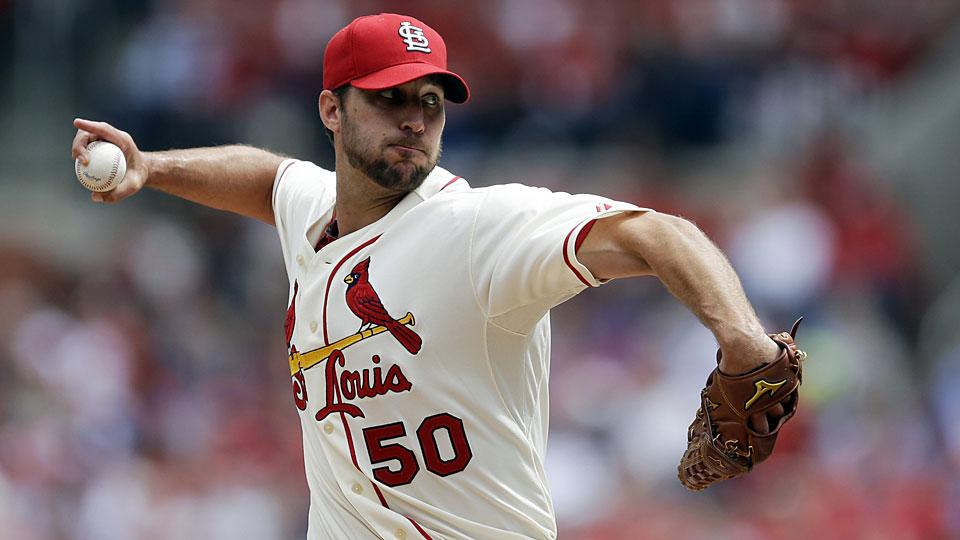 Current Mets pitchers and former TJS patients, Matt Harvey (96.0 mph) and Jacob deGrom (95.0 mph) have returned to the top of the fastball velocity charts for starters. Harvey’s surgery was in October 2013. Patrick Corbin’s fastball velocity is the highest of his career. Same with Ivan Nova.

The Case of Homer Bailey

After 7,500 words, we’ve finally reached the only part of this topic that many of you care about: What can we expect from Homer Bailey?

Homer Bailey underwent Tommy John surgery on May 8 to repair a significant tear of his right UCL. Less than a year before, Bailey had flexor-pronator mass surgery on the same elbow. The latter surgery deals with muscles in the elbow that stabilize the pitching motion and reduce stress on the elbow. Bailey is the same age as Adam Wainwright was when he underwent TJS. 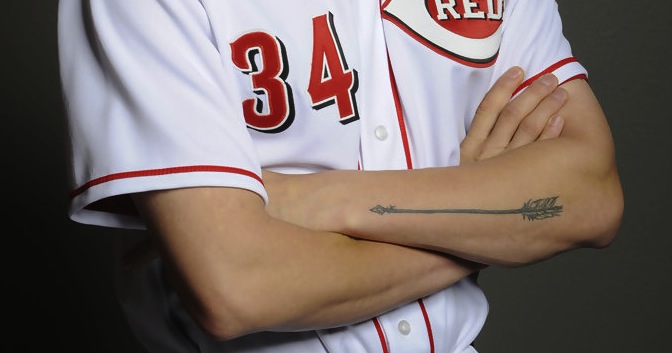 Dr. Tim Kremchek, an orthopedic specialist who does 120 UCL replacements a year, did both of Bailey’s elbow surgeries. Kremchek is one of four surgeons who do the majority of Tommy John surgeries. He has performed more than 1,500. Kremchek has operated on LeBron James, Barry Larkin and Ken Griffey Jr.

In Bailey’s case, there may have been synergy between his two elbow injuries. His fraying ligament may have put more stress on the nearby muscles, causing them to tear. His weakened muscles would have provided less protection for the joint and could have contributed to his UCL ripping. The good news for Bailey is that studies of pitchers with flexor mass and UCL problems find that a similar percentage of pitchers return to full performance compared to those pitchers who just have TJS. 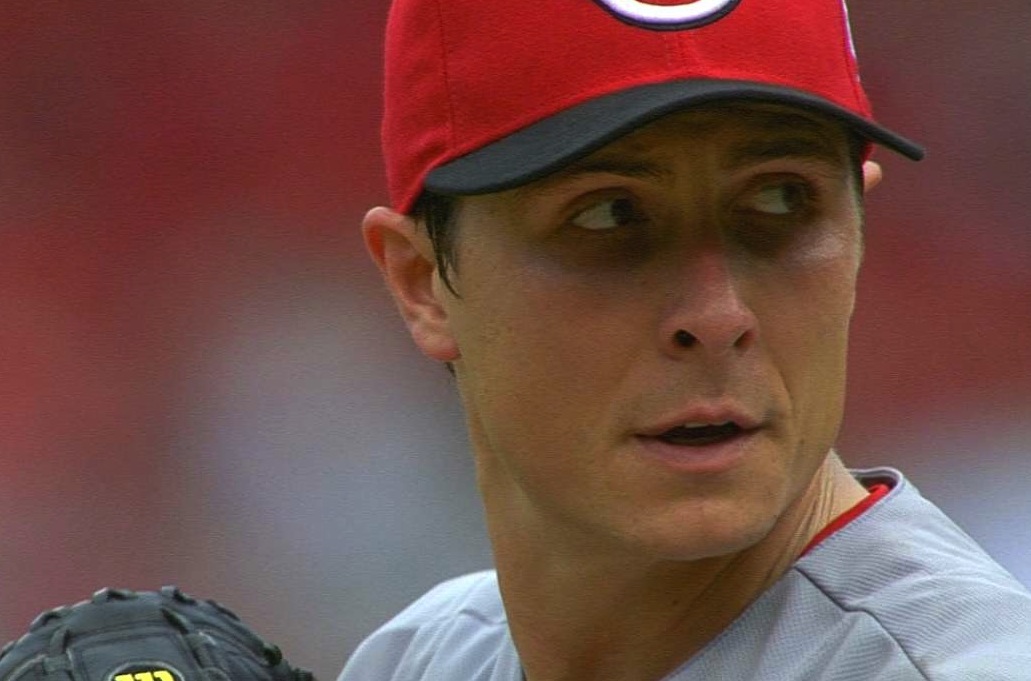 Homer Bailey’s elbow muscles and ligament are now fixed. The Reds pitcher told FSO broadcaster Jim Day on August 26 that his recovery is going great. Bailey used the words “ahead of schedule.” The pitcher reports his elbow is pain free and he expects to throw two bullpen sessions prior to spring training. Bailey’s target date for rejoining the Reds active roster is May 15 “if not sooner.” That’s consistent with the experience of a significant number of UCL restoration patients.

In thinking about the prognosis for pitchers who have Tommy John surgery, it’s worth remembering the lesson of the old joke about the patient who asks his surgeon: “Doctor, will I be able to play the piano after the operation?” The doctor replies, “Yes, of course.” To which the patient says, “That’s wonderful! I couldn’t play before.”

When reconstruction and rehab go as expected, pitchers generally return to the level of performance they had achieved when healthy prior to the surgery, allowing for aging. Reconstruction of a UCL won’t turn a mediocre pitcher into a great one, but neither will it necessarily mean a top pitcher will suddenly become average.

Keep in mind there is no predictable career track for healthy pitchers. Some jump to a higher level and some become ineffective. Some previously healthy pitchers get injured. Healthy pitchers age and lose velocity. That full range of possibilities is also the case with Tommy John pitchers.

What have we learned?

Ulnar collateral ligament (UCL) injuries are a huge and growing problem for major league baseball. We’re figuring out the cultural factors – single-sport, year-round baseball, emphasis on velocity – that push young pitchers beyond where they can safely go. But as long as wins, scholarships and professional contracts appear to be connected to those factors, changing youth practices will be difficult.

Reconstruction surgery has become a routine and viable one-time solution for the vast majority of pitchers. But even in the best case, pitchers lose at least an entire season if they have the Tommy John procedure.

As our understanding develops about prevention, the old model of simply limiting workload – innings limits and pitch counts – is being exposed as insufficient. Most major league organizations – some much faster than others – are shifting their prevention paradigm toward biometric analysis and real-time measurement of stress on elbows.