For the final time in 2015, the St. Louis Cardinals (88-51) will visit the Cincinnati Reds (57-81). The Cardinals are enjoying the best record in baseball in 2015, and come in with a magic number of 20 to clinch the NL Central. The Reds would love nothing more than to crash the Cardinals party, and allow the Pittsburgh Pirates (who are 4.5 games back) to gain ground on them.

John Lamb has had just one bad inning in all of his bad starts so far with the Reds. Overall though, Lamb’s effort through his first five starts should be applauded. It would be wise to disregard his 0-3 record and 6.11 ERA. Lamb’s 33 strikeouts to just 7 walks is very encouraging. Lamb has only made five starts, but a K/9 of 10+ is very good. Just how good is it? This season only five qualifying pitchers have K/9 of 10+: Sale, Kershaw, Archer, Scherzer, and Salazar.

Jaime Garcia, when healthy, is one of the best pitchers in baseball. Since the start of 2010, Garcia’s 3.21 ERA ranks 25th best in the MLB, and his 3.26 FIP ranks 21st best. The problem for Garcia is that he has only pitched 678.2 IP, while most pitchers on that leaderboard have pitched over 1,000 innings.

ICYMI, Joey Votto went absolute nuts on home plate umpire Bill Welke, and the crazy thing is–it came in the middle of the at-bat, not after a strikeout. Welke had an absolutely horrendous strikezone last night, and I guess Votto had just had enough. C. Trent Rosecrans of the Cincinnati Enquirer did a great job explaining the situation:

Votto had watched strike two Ã¢â‚¬â€œ a ball all replays and tracking systems showed was outside Ã¢â‚¬â€œ and then turned to discuss it with Welke. Votto then pointed toward the Reds’ dugout and appeared to say, “I had asked for time.” As soon as Votto said something to the bench, Welke signaled that Votto had been ejected.

Ã¢â‚¬Å“When Joey looked over, that, to me, was my sign to get out there and make sure I had an understanding of what was going on in that situation. By the time I got there, Joey had been ejected,Ã¢â‚¬Â manager Bryan Price said. Ã¢â‚¬Å“At that point in time, I did not know, but by the time I got isolated with Bill at home plate, we did both come to the conclusion that Joey had asked for time out, and Bill didnÃ¢â‚¬â„¢t feel like he was going to give him time out for whatever Ã¢â‚¬â€œ due to whatever history had happened. So our argument is, of course, a guy asks for time out, you give him time out, and then you give him a certain period of time out of the box, and then you insist he gets back in the box or you put the ball in play. Those are some of the options.”

Votto then slammed his helmet and went nose to nose with Welke. At one point, Welke pointed to his cheek and seemed to mouth, “you spit on me.”

At that point, Price came out of the Reds’ dugout and third-base coach Jim Riggleman and first-base umpire Laz Diaz, a former Marine, tried to hold Votto back.

As Price argued, he, too, was ejected.

Ã¢â‚¬Å“I wasnÃ¢â‚¬â„¢t at home plate, but I do know that Joey has a good rapport with the umpires. I think when he talks, he talks respectfully, and obviously something got sideways there between the two of them, and it went into a direction we had hoped it wouldnÃ¢â‚¬â„¢t,” Price said. “I think Joey handled himself professionally up until the ejection and then was rightfully upset. How do you qualify whatÃ¢â‚¬â„¢s the right way to be upset? He was upset. Bill was upset. I was upset. There was a lot of upset people today. You know, and thatÃ¢â‚¬â„¢s Ã¢â‚¬â€œ we felt it was warranted.Ã¢â‚¬Â

You can see below (thanks to @ShutUpYosief), the strike call that set Votto off was fairly ridiculous. People have complained about Votto not playing with enough “fire.” Well, I think that is a silly think to argue now. 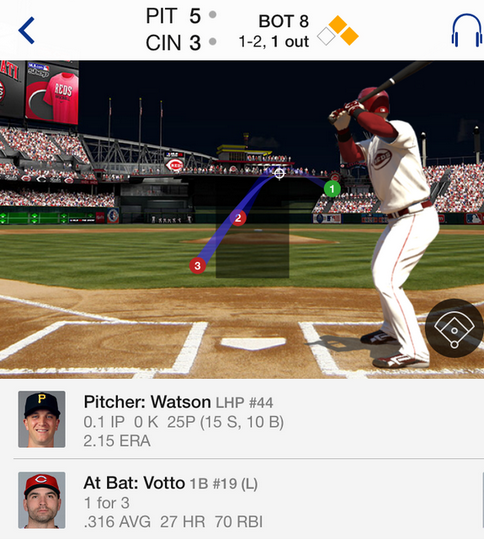 A good friend of Redleg Nation, Paul Daugherty, never misses a chance to rip on Votto. Today, he called Votto’s behavior “unacceptable.” Daugherty must have been thinking to himself recently that he can’t take a cheap shot on Votto’s performance on the field anymore, so he must attack his character.

This is the same Paul Daugherty that said in 2013 “Votto doesnÃ¢â‚¬â„¢t pass the eyeball test this summer. There have been times when he simply looks disengaged.” Hey Paul, you can’t have both ways. You can’t rip the guy for being disengaged, and then rip him again when he shows too much fire and passion. Paul is clearly past his prime and is no longer elite (although one could argue that he never was). He is now just a shock jock. He knows he can’t get page views with his writing, so he has to use click-bait headlines.

Daytona Tortugas advance to the finals

The Reds single-A class affiliate Daytona Tortugas advanced to the Florida State League Championship with a 2-1 win last night. The Tortugas swept the Clearwater Threshers in a best of 3 series for the North Division Title. Reds #6 prospect Nick Travieso (according to MLB Pipeline) pitched seven innings of 1-run baseball, while striking out 6, and walking just 1. Milb.com said that Travieso was still hitting 95 MPH in the 7th inning. Reds #27 Chad Wallach (acquired for Mat Latos) hit a solo home run for the Tortugas.

The Clearwater Threshers had the best record in the FSL, and won both halves. Daytona held them to 1 run (solo HR) in 18 innings. #Reds

The future is bright for the Reds. Two other affiliates are playing postseason baseball too.

The Reds advance rookie league affiliate, Billings Mustangs also began their first game of the playoffs last night. The Mustangs beat Missoula 5-2 in the first of the 3-game series for the North Division Pioneer League series. The Mustangs feature the Reds top draft pick of 2015, and #4 prospect, catcher Tyler Stephenson.

The Reds will have to wait a while before all this great talent in the minor leagues can reach the big league club. Until then, the Reds will have to settle for the spoiler role. The next loss for the Reds means they finish the season with another losing record. The Reds would like to avoid that as long as possible, and in the mean time spoil the Cardinals party. Go Reds!