The Reds might be having their worst season in fourteen years, but their dominance against the playoff bound Pittsburgh Pirates continued on Labor Day in the Queen City. The win on Monday afternoon pushed the Reds record against the Pirates to 10-4 in 2015.

The Reds scored three times in the third inning to take a quick 3-0 lead. Eugenio Suarez had an RBI single, and then the Reds got two more runs on a sacrifice fly by Tucker Barnhart. The Pirates right-fielder, Gregory Polanco, air-mailed the throw home, which allowed two runs to score.

According to FangraphsÃ‚Â WPA statisticÃ‚Â (winning percentage added), the most important play of the game wasÃ‚Â Eugenio Suarez’s RBI single in the 2nd inning with 0 outs, giving the Reds a 1-0 lead.Ã‚Â That play increased the Reds chances of winning by 10.1% (from 58.6% to 74.8%).

DeSclafani was outstanding on Monday afternoon. He didn’t allow a walk in 7.1 innings, and struck out 6. Through 26 starts this season, DeSclafani has a 3.75 ERA and 3.81 FIP. He has done a great job of late by limiting walks. DeSclafani has walked just 10 batters in his last 7 starts (42.0 IP).

Jay BruceÃ‚Â collected his 1,000th career hit in the 2nd inning. Bruce had to earn it too, as he saw 13-pitches in the at-bat. Jason Bourgeois had a 13-pitch AB in the first game on Saturday. Those two 13-pitch at-bats by Bruce and Bourgeois are the only 13-pitch AB’s since 2012 for the Reds. 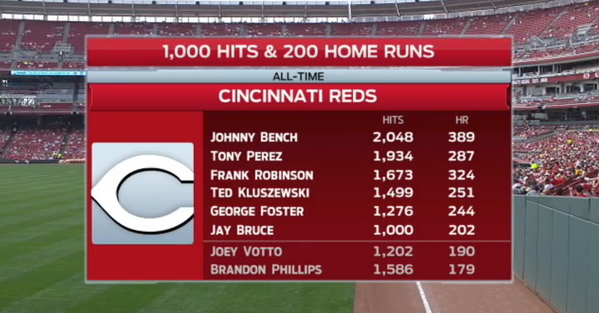 Joey VottoÃ‚Â extended his on-base streak to 26 consecutive games (10 game hitting streak) with a single on an 0-2 pitch in the 3rd inning. Owen Watson of Fox Sports wrote a great piece today about Votto’s historic 2015 season.

The Reds turned a really great double play to get out of trouble in the 8th inning. I am not sure which was better: the actual play or the reaction from Jumbo Diaz. Oh, it’s definitely Jumbo’s reaction.

Todd FrazierÃ‚Â went 0 for 4 with 2 K, and is now hitting .261/.311/.509 on the season. He was hitting .284/.337/.585 at the All-Star break. It is amazing that there was a point in time when people actually thought Todd Frazier was a better hitter than Joey Votto. Maybe the Reds should have traded Todd Frazier at the deadline? Too soon?

Do the Reds know that there's no federal law requiring a fast middle infielder/centerfielder to hit leadoff?

This is the *9th* consecutive game that Jason Bourgeois has led off. His career OBP is .300.

Tony Cingrani, Brandon Finnegan, Josh Smith and Kristopher Negron will be called up by #Reds on Tuesday

That appears to be all of the September call-ups for the Reds. It looks like the Reds will not call up top prospects Jesse Winker or Robert Stephenson. That is a move that I personally agree with. I don’t think the Reds will be ready to compete again until at least 2017, so there is reason to rush either of these guys.

Jim Day speculated on the Reds broadcast that Brandon Finnegan could start for the Reds on Wednesday. The Reds currently have Wednesday’s starter listed as TBA, and Wednesday would be Finnegan’s day to pitch on normal rest. Finnegan was of course the Reds top prospect acquired for Johnny Cueto from the Royals.