Rawly Eastwick was drafted by the Reds in 1969, and pitched for them from 1974 Ã¢â‚¬â€œ 1977.Ã‚Â  He led the league in saves in 1975 and 1976 (the only Red to lead the league in consecutive years), and was named the Sporting News NL Fireman of the Year in 1976.Ã‚Â  He was credited with two wins and a save in the epic 1975 World Series.Ã‚Â  He retired after the 1981 season and resides in the Boston area.Ã‚Â  He also survived the great challenge of coaching me at Fantasy Camp.Ã‚Â  We traded emails for the following interview, which has been lightly edited.Ã‚Â

When did you become aware the Reds were interested in you?Ã‚Â  Were other teams scouting you?Ã‚Â  Were you considering college?Ã‚Â Ã‚Â  I considered college and I was scouted by the Phillies and Pirates. I had no idea that the Reds were looking at me. Two brothers that were scouts in the south Jersey area (Rex and Joe Bowen) were responsible for me being drafted in the 3rd round of the 1969 June draft. I played in the rookie league with Ken Griffey in Bradenton, Fla. And went to a junior college called State College of Florida. DidnÃ¢â‚¬â„¢t finish because baseball took up almost 12 months of my time.

You struggled initially in the minors.Ã‚Â  Who helped you and what adjustments did you make the jump to the majors?Ã‚Â Ã‚Â  I did struggle in the lower minors. In 1971 I started working with Brooks Lawrence who became my pitching coach and mentor. He taught me a slider and how to throw a better change up. He also helped me with my mental makeup. I owe a lot to Brooks and I used to spend time in the evenings with him and his wife Dolly talking about baseball and life in general.

Did the organization ever consider making you are a starter in the minors?Ã‚Â  I did both relief and starting in the minors. I think they thought my makeup was best suited to being a closer.

What pitches did you have?Ã‚Â  What was your approach? Ã‚Â I had a good fastball which I used 80% of the time and threw a slider and changeup. Mostly fastball/slider. My approach was here it is – try and hit it.

What do you remember about your major league debut and the 1974 season? My debut was against the Atlanta Braves. I threw the ball OK, I threw 2 innings and gave up a run. Dang! Ã‚Â (per Baseball Reference, Rawly relieved Tom Carroll in the third inning after he surrendered 4 runs to the Braves.Ã‚Â  The Reds won 9-6).

When you were called up in May, what did Sparky say your role would be?Ã‚Â  Sparky really did not say much about my role but I think they slowly worked me into the closer role and that was it.

After saving a couple games early in 1975, you struggled in June but Sparky stuck with you.Ã‚Â Ã‚Â  What changes (if any) did you make? Ã‚Â Ã‚Â Sparky stuck with me and as time went on I got better and better and gained more confidence. From July through September I felt like nobody could hit me. Ã‚Â (Note: from July 2nd to the end of the season, Eastwick went 5-2 with a 1.15 ERA and 20 saves).

Sparky was famous for his bullpen usage Ã¢â‚¬â€œ were there any patterns in how he used each of you?Ã‚Â  I just think Sparky had Borbon and Carroll for middle innings and McEnaney and me for the closer roles.Ã‚Â

What did Sparky do that was different from other managers?Ã‚Â  How did Larry Shepard help handle the pitching staff?Ã‚Â  I thought Sparky was tough but fair. I think he was the perfect manager for that team as again he was tough but knew how to work with the big guys to accomplish the goals. I donÃ¢â‚¬â„¢t think many other managers could have done what he did as he had a certain personality etc., other managers may have been too soft. I think he was of the mind that he didnÃ¢â‚¬â„¢t want games to get out of hand and he felt he had a good bullpen so he used it when he felt like he needed to. Larry was a good communicator and got along well with all of the pitchers and he was an intelligent guy. He also had a good sense of humor and knew when to use it and when not to.

In 1975, you appeared in 58 games, with 31 multi inning appearances, and entered games with runners on base 28 times.Ã‚Â  Only 5 of your saves were of the 3 out, 9th inning variety that is standard now.Ã‚Â  What do you think of the current usage of bullpens and closers vs. what was common when you played?Ã‚Â  I think organizations want to save the arms of the closers and keep them healthy for a longer period of time so they limit their use to shorter stretches.

Tell us something about what is what like to play for the Big Red Machine.Ã‚Â  I think the whole team got along well and we all truly liked each other and enjoyed being together. We had a special bond that to this day is still there. Sparky had Johnny, Pete, Joe and Tony basically keep everybody in line but they were really good to us young guys and watched out for us.Ã‚Â Ã‚Â 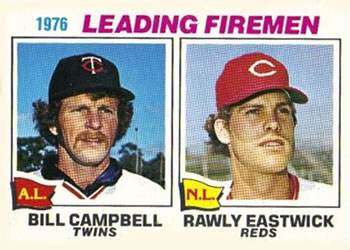 You had an excellent year for the Reds in 1976 (11-5, 2.09 ERA, 26 saves, and ranked 5th in the NL Cy Young voting), but you were traded on June 15th, 1977 to the Cardinals for Doug Capilla.Ã‚Â  How did you find out?Ã‚Â  Were you surprised?Ã‚Â  I was a little surprised at being traded but after thinking about it at the time it made sense because we could not agree on a new contract.

You signed with the Yankees as a free agent after the 1977 season.Ã‚Â  What was that experience like? Did you consider other teams?Ã‚Â  I signed with the Yankees and enjoyed my time there. George was very nice to me and so were the other players there. I wanted to do something different as far as pitching and long relief was something I was keen to do and maybe eventually work up to starting somewhere. I also considered the Sox, Dodgers and Phillies.

You retired after the 1981 season.Ã‚Â  What was the transition away from the game like?Ã‚Â  I retired in the spring of 82 and was interested in getting into real estate investing which has worked out well and I have been working in commercial real estate helping manage office buildings.

What are your favorite memories of your time with the Reds?Ã‚Â  I have so many good memories of being with the Reds. I was in the organization for almost 9 seasons. I really liked the organization and especially all of the players who were good to me and I made several long lasting friendships. The two World Series championships were a dream come true, and winning a Fireman of the Year was a dream come true also.

Thank You for your time and your contributions to the success of the Big Red Machine.