I generally like Jim Kelch and Chris Welsh in the TV booth. But during the first game tonight, there was a five-minute stretch of the broadcast with a real Alice in Wonderland quality. Kelch felt the need to clarify the Reds hadn’t yet been eliminated from the postseason, despite the team being 20.5 games out of the second wild card spot with 30 games to go and having an entire starting rotation comprised of rookies. Minutes later, Chris Welsh defended Bryan Price starting the likes of Skip Schumaker because the fans don’t want to see a bunch of rookies. It brought to mind Lewis Carroll’s words Ã¢â‚¬Å“If I had a world of my own, everything would be nonsense.Ã¢â‚¬Â

Somehow, the earth didn’t stop rotating on its axis and the fans didn’t demand their money back because Bryan Price started Adam Duvall and Ryan LaMarre in the nightcap. Each outfielder made a nice play in the outfield, which distinguished them from the Reds LF in Game 1. Don’t get me started on that subject.

Bullpen PositivesÃ‚Â After the rains stopped, Carlos Contreras and Pedro Villarreal combined for five innings giving up only one run.

Bullpen Negatives Jumbo Diaz gave up three runs in his one inning, effectively putting the game out of reach.

Offense PositivesÃ‚Â Brayan PeÃƒÂ±a had two hits. Adam Duvall hit his second home run for the Reds in like five at bats. That gives him exactly two more home runs than Skip Schumaker has this year. So clearly, don’t give Duvall another at bat for the rest of the home stand.

Offense NegativesÃ‚Â The Reds had six hits and drew no unintentional walks. They were not facing Clayton Kershaw.

Lightning StrikeÃ‚Â You may have heard that lightning struck Great American Ball Park. But you’d be wrong to think it looked like this: 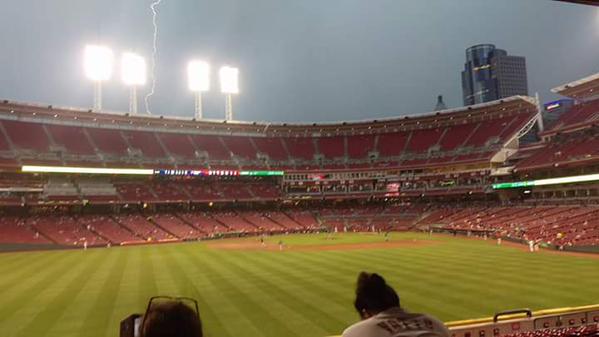 Instead, it was when Pedro Villarreal doubled into left-centerfield to knock in two runs in the fourth inning. They were the first two RBI of Villarreal’s career. 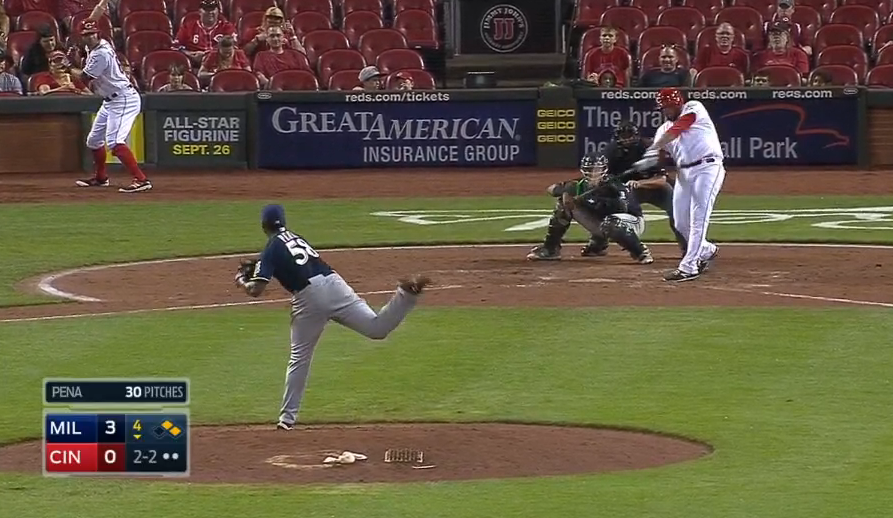 Cowboy BluesÃ‚Â Today is Jeff Brantley’s birthday. It probably didn’t go as he hoped. Not only was the extra game added tonight, but the 1 hour, 33 minute rain delay pushed the game’s conclusion right up to 11 p.m.