The Reds offense jumped all over Matt Garza on Saturday afternoon in the first game of a doubleheader. Jason Bourgeois began the afternoon with a 13-pitch at-bat. The result was a pop-up, but it set the tone for a short afternoon for Garza.

Eugenio Suarez led the Reds with three hits andÃ‚Â two runs driven in off Garza. Brandon Phillips also had two hits and a walk off Garza. The Reds scored five runs, and chased Garza before he could get out of the fifth inning.

John Lamb pitched really well through the first five innings, and was well on his way to his first MLB win. Then the sixth inning and Skip Schumaker happened. Lamb gave up a cheap single to Ryan Braun to begin the inning, and then his defense really let him down. Skip Schumaker misplayed two balls, and then Jason Bourgeois misplayed another ball. Lamb left the game with the score tied at five, but Sam LeCure came in and gave the Brewers a 6-5 lead.

The Reds loaded the bases with no one out in the seventh inning, but Skip Schumaker grounded into a double play. The Reds tied the game, but were only able to get one run in the inning.

It only took one pitch in the eighth inning for J.J. Hoover to give the Brewers the lead back. The Brewers number eight hitter, Elian Herrera, drilled a pitch into the sun deck in right-field.

The Brewers added another run in the ninth inning. The Reds brought the winning run to the plate in the bottom of the ninth, but Frazier struck out and Schumaker lined out off Francisco Rodriguez to end the game.Ã‚Â It will be a quick turnaround for the two clubs, as the second game of the doubleheader begins at 6:10. 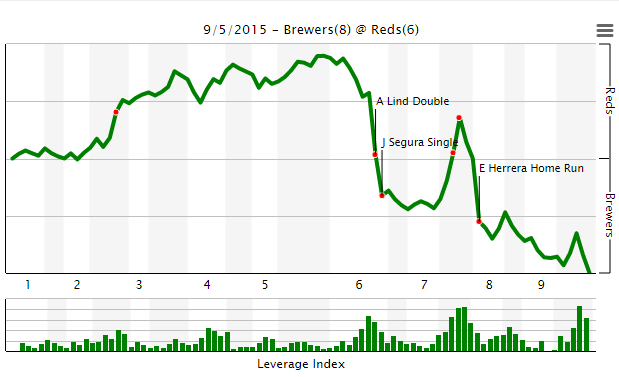 According to FangraphsÃ‚Â WPA statisticÃ‚Â (winning percentage added), the most important play of the game wasÃ‚Â J.J. Hoover allowing a solo home run to Elian Herrera to lead off the 8th inning, giving the Brewers a 7-6 lead.Ã‚Â That play decreased the Reds chances of winning by 27.5% (from 50.0% to 22.5%)

Phillips had a big day at the plate, reaching base four times. Going back to Wednesday, Phillips has reached base in 8 consecutive PA!Ã‚Â Phillips now has a .331 OBP on the season, which is his best since he posted a .353 OBP in 2011.

Joey VottoÃ‚Â extended his on-base streak to 23 games, as he reached base four times (2 walks, 2 singles). Votto has now reached base at least once in 117 of the 131 games he has played in, and reached base twice in 98 games.

Eugenio SuarezÃ‚Â had a 3-hit day. Suarez had a pair of singles and a double. He drove in 2 runs for the good guys.

I’ll take the glass half full look on John Lamb again. He was really good through the first five innings. If he has a capable defense behind him, he most likely gets out of that inning with at least a two run lead. Lamb’s peripheral numbers look really good. Counting today, he has a 3.50 FIP, and has 33 K’s to just 7 BB. The thing that Lamb has struggled with through his first three starts was the long ball, which he didn’t allow any of today.

Jason BourgeoisÃ‚Â had a 13-pitch AB to begin the game. It ended with a pop-up, but that isn’t important. It was nice to see the Reds leadoff hitter work the pitcher. Process > Results

Todd FrazierÃ‚Â (with the help of Joey Votto) made an incredible play in the 3rd inning.

Just stop with this nonsense of playing Skip Schumaker regularly. There is no chance that Schumaker is on the Reds roster next season, so playing him does nothing to help the future.Ã‚Â Adam Duvall and Ryan LaMarre both probably are not going to be the Reds next everyday LF, but they at least have a future with this club. Skip Schumaker starting in 8 of the last 16 games is absolute madness.

Chris Welsh said during the Reds broadcast that Bryan Price doesn’t want to play Duvall in LF because he is inexperienced there (he didn’t start playing LF until this season in the minors). Yet, Price will play Skip Schumaker, who is one of the worst fielders in MLB history.Ã‚Â He entered play on Saturday with -60 career defensive runs saved. Welsh called out Price for his hypocrisy too for saying a while back that he will play the younger players, but he hasn’t.

J.J. HooverÃ‚Â has a really nice season, but he was not sharp today.

Reds broadcasterÃ‚Â Chris WelshÃ‚Â had some wise words talking about Joey Votto. Jim Kelsh said something along the lines of people in the Reds organization wanting Votto to drive in more runs. Welsh’s response was spot on:

“Why would you want to change him? You want to take him from an MVP type player to somebody who’s mediocre? No, I think it’s easier to change the other side of the coin there, and the guys that are surrounding him.”Ã‚Â

Well done Chris Welsh. At least someone in the organization understands how valuable Joey Votto is. Then after Votto reached base for the 4th time in the game, Welsh said this:

“I have not seen a player this hard to retire since Barry Bonds at the height of his glory.”

You won’t have to wait long to watch the next Reds game. Well, actually you can’t watch the second game. There is no TV broadcast of the game in Cincinnati. So you better hurry up and drive down to GABP if you really want to watch two teams fight for fourth place in the NL Central. If you live outside of Cincinnati and have MLB.tv, you will be able watch the Brewers broadcast.