Reds starter Anthony DeSclafani pitched very well through the first five innings. He had only allowed two hits, one walk, one run, and struck out seven. The Reds lead 3-1 entering the bottom of the sixth. However,Ã‚Â DeSclafani got into trouble in the sixth inning, and couldn’t get out of it. Sam LeCure came into the game, but he allowed the tying run to score.

Eugenio Suarez hit a solo home run to lead off the seventh inning to give the Reds the lead back. That lead didn’t last for long though. Cincinnati native,Ã‚Â Kyle Schwarber struck the Reds again, as he blasted a two-run bomb off Burke Badenhop to give the Cubs a 5-4 lead.

The Cubs bullpen held the lead, and the Cubs won 5-4. The CardinalsÃ‚Â walked off the Washington Nationals in the bottom of the ninth to officially eliminate the Cincinnati Reds from the NL Central in 2015. The Reds have been eliminated from the division with 33 days left in the baseball season. 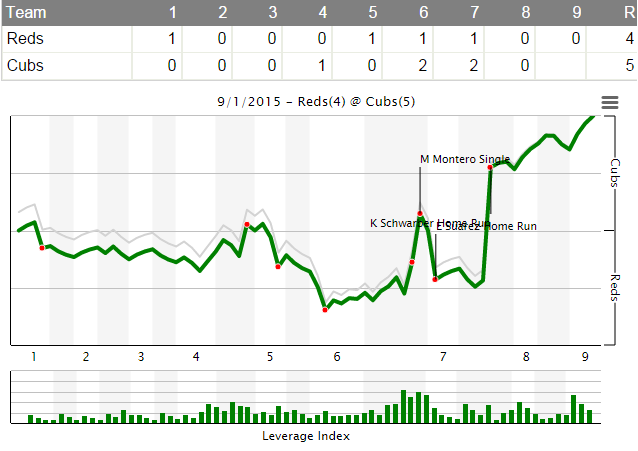 According to FangraphsÃ‚Â WPA statisticÃ‚Â (winning percentage added), the most important play of the game wasÃ‚Â Burke Badenhop allowing a 2-run home run to Kyle Schwarber with 2 outs in the 7th inning, giving the Cubs a 5-4 lead.Ã‚Â That play decreased the Reds chances of winning by 49.4% (from 71.8% to 22.4%).

That VottoÃ‚Â guy is at it again. He hit his 26th home run of the season in the first inning, which ties him with Paul Goldschmidt and Anthony Rizzo for 5th in the NL. Votto also had an RBI double in the 6th inning. I am not sure if this man is human or not. The great Joe Posnanski wrote a great piece about Votto’s amazing second half today.

Votto now leads the league in OBP. At least for the moment. If he keeps the lead, it will be the 5th time in 6 years.

Votto entered today with a 1.288 OPS in the second half. The only players since at least 1914 (the last year data for this sort of thing is available) to have an OPS better than 1.288 in the second half are a couple guys named Bonds, Williams, Ruth, and Hornsby. One might say this is some…..elite company. 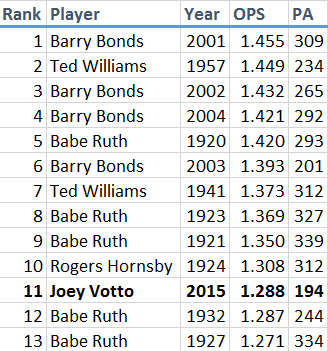 Anthony DeSclafaniÃ‚Â pitched pretty well again. The first five innings were absolutely awesome. He couldn’t get through the sixth inning, which is something he needs to improve on. Overall all though, another solid start during a really solid rookie season for DeSclafani: 5.2 IP, 4 H, 0 HR, 3 ER, 2 BB, 7 K, 1.71 FIP.

Eugenio SuarezÃ‚Â hit his 11th home run of the season. That puts him 9th in the MLB among SS, despite having about half of the PA of the leader. The Reds are going to have a really tough decision on how to deal with Suarez. I hope they don’t mess up the kid. He needs to be an everyday SS, 2B, or 3B.

Burke BadnehopÃ‚Â got rocked by Schwarber.

Fernando Rodney got the win for the Cubs tonight. He allowed the Reds to take the lead in the 7th inning, yet still got the win. Reason #1873 why wins and losses are terrible way to evaluate a pitcher.