Two teams that are a combined 47.5 games out of first place shouldn’t be allowed to play for 4 hours. If the Geneva Convention doesn’t prohibit it, it should. The game featured a pop-up bunt that fell in for a hit to drive in a run, a ground out on a check swing on a pitch that bounced in front of the plate, two errors on infielders who were unable to handle sketchy throws from the outfield, and a wild pitch thrown when a relief pitcher at bat was trying to bunt. It was a game where the thing Marty Brennaman got the most excited about was two Brewers hitters who wouldn’t stay in the batters box during their AB.

The Reds were winning 6-1 and 7-3 until certain members of their pitching staff remembered the team was trying to secure the first pick of the draft. Unfortunately Jay Bruce and Joey Votto wanted to win this game. When are those guys going to get it?

Keyvius Sampson had a terrible game. Despite being spotted leads of 6-1 and 7-3, Sampson couldn’t get through four innings. He threw 97 pitches to record 11 outs. “Sampson has not looked comfortable at any point of this game,” said Jeff Brantley. Pedro Villarreal and Burke Badenhop had poor games as well, giving up three runs in 2.1 innings of work.

Jay Bruce hit a 3-run homer in the 2nd inning. The ball hit high off the centerfield scoreboard, which is raised well above the fence. The WLW radio broadcast put the distance at 430 feet. StatCast says it was 441 feet (and 107 feet high, think about that). That would make it the longest homer by a Reds player this year. Don’t take my word for it, check out this authoritative-looking graphic. 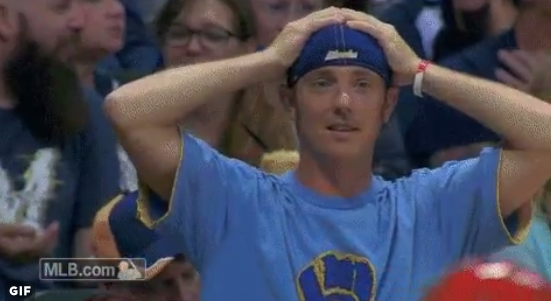 Jay Bruce had three hits, batting in the #2 spot. Jason Bourgeios had a three-hit game as did Joey Votto. Todd Frazier had two hits including his 30th home run of the season. It was Frazier’s first homer in 57 plate appearances. Skip Schumaker had two hits.

The Reds took the lead in the top of the ninth when Bruce singled to center andÃ‚Â Joey VottoÃ‚Â crushed an opposite field home run and he tried to suppress a smile as he rounded the bases. Note: Even though it turned an 9-8 deficit into a 10-9 lead in the ninth inning, there were no runners in scoring position, so it wasn’t a clutch hit. It did, however, produce the first blown save of the season for Brewers’ closer Francisco Rodriguez.

Aroldis Chapman recorded his first save in 21 days, tasked with the tough job of protecting a three-run lead. /waves tiny, worn Reds pennant/ It’s not like the Reds could use Chapman in the rotation right now anyhow.