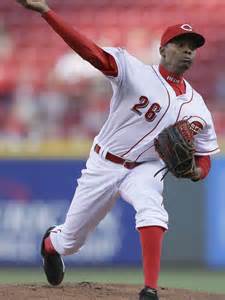 Rookie Raisel Iglesias did something over the weekend that only 16Ã‚Â Reds pitchers had ever done before: strike out 13 or more batters in a single game. The names on that list of 16 pitchers are a veritable “Who’s Who” of the best pitchers in franchise history. The Reds have played approximately 16,000 games in the last 100 years, yet a Reds’s pitcher has struck out 13 or more batters in only 36 of those games, which is minuscule by comparison. That is less aboutÃ‚Â 0.2%. It happens every 445 games on average. Striking out 13+ batters in a single game is a very rare event, especially for a rookie. Johnny Cueto has never done it. Neither has Homer Bailey nor Mike Leake nor any other current Red. Only 13 times has a pitcher whiffed more than 13 hitters in a Reds uniform. What Iglesias did on Sunday was a truly rare feat, certainly much more rare than I realized before I researched this article.

Iglesias didn’t do this against a bad team either. The Diamondbacks are the highest scoring team in the National League. Raisel whiffed every batter in the lineup except for leadoff hitter Ender Inciarte. He struck out fellow Cuban rookie Yasmany Tomas fourÃ‚Â times for the Golden Sombrero. The NL’s best hitter, Paul Goldschmidt was a strikeout victim as well. The 13 Ks in one game is by far the most Iglesias has recorded so far in his young career. His previous high was eight, which he has done three times.

This is where Iglesias would fit if he had enough innings to qualify: 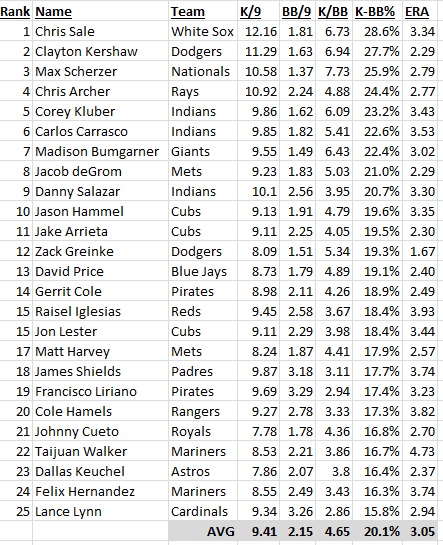 Look at the names above Iglesias. Basically every one of them are either Cy Young Award winners or top contenders. Look at the names below Iglesias. We know how awesome Johnny Cueto is. Felix Hernandez is a future Hall of Famer.Ã‚Â Being on this list almost guarantees that a pitcher is an elite, top of rotation ace. Let’s not get carried away yet though. Iglesias has only done this for 73.1 innings. He still has a lot to prove. He needs to show he can hold up to a starter’s workload for a full season. But the early returns on this Cuban defector are simply spectacular. 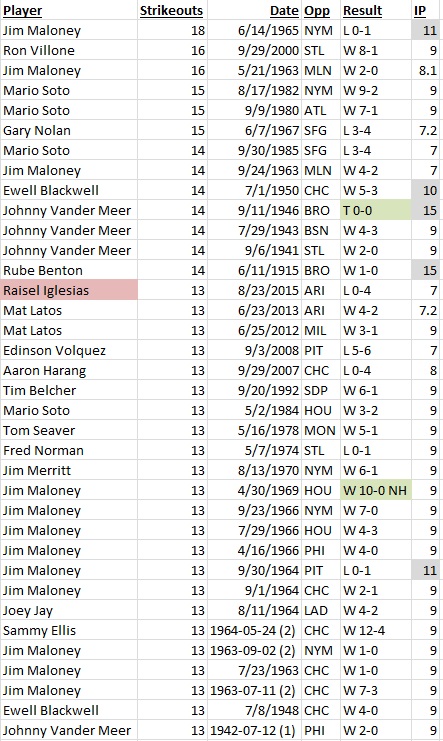 Only one other time in Reds’ history has a rookie pitcher struck out 13+ batters in a game. That happened in 1967 when Gary Nolan whiffedÃ‚Â 15 San Francisco Giants, including Hall of Famers Willie Mays and Willie McCovey. Nolan pitched 7.2 innings that day and was matched up against Hall of Famer Juan Marichal. The Reds lost the game 4-3. Although Nolan went on to star forÃ‚Â the Big Red Machine he never again struck out 13 or more batters in a single game the rest of his career.

The king of high-strikeout games in Reds history is unquestionably Jim Maloney. He whiffed 13+ batters in a game a whopping 12 times, which is impressive enough on its own, but when you consider that it has only been done a total of 36 times in franchise history it becomes even more startling. The next highest total is four times by Johnny Vander Meer and Mario Soto.

Maloney holds the Reds’ record for most strikeouts in a game with 18, which he accomplished in a 1-0 loss to the Mets in 1965. In that remarkable game, Maloney pitched 11 innings, giving up only two hits and one walk yet he still lost 1-0. Maloney did not allow a hit in the first 10 innings, then gave up a home run and a single in the 11th inning. Back then that counted as a no-hitter, but the rules were later changed to eliminate 9 inning no-hitters where the pitcher gave up a hit in extra innings.

Maloney also co-holds the franchise record for Ks in a 9-inning game. He struck out 16 batters in 8.1 innings against the Milwaukee Braves in 1963, including whiffs of Hall of Famers Hank Aaron and Eddie Mathews. Joe Torre and Bob Uecker also played for that Braves team. Maloney is the Reds’ all-time leader in career strikeouts (1592) and K/9 (7.9)

On April 30th, 1969, Maloney struck out 13 batters while tossing a no-hitter vs the Houston Astros. Joe Morgan was the leadoff batter for that Astros team and whiffed once versus Maloney. Cesar Geronimo also played for the Astros that day and struck out as a pinch hitter.Ã‚Â The very next day, theÃ‚Â Astros’ Don Wilson threw a no-hitter against the Reds. How is that for revenge?

Tied with Maloney at 16 strikeouts in a 9-inning game is Ron Villone, who managed the feat in the year 2000 versus the Cardinals. That Redbirds’ team featured slugger Mark McGwire, hotdog Jim Edmonds, Will Clark, Shawon Dunston, former Red’s great Eric Davis and future Red Edgar Renteria, all of whom struck out in that game. Villone played 15 years in the big leagues, including two seasons with the Reds in 1999 and 2000. The Reds were good in those days just before the Lost Decade. Villone put up a 19-17 record with a 4.82 ERA in his Reds tenure, which was essentially a league average stat line during that era of high-octane offenses. This 16 K game was the only time in his 15 year careerÃ‚Â that Villone even hit double figures in strikeouts. In fact, it is double his highest number of whiffs in any other game in his career, which was 8. This was truly a one of kind accolade for the journeyman hurler.

Mario Soto twice struck out 15 batters in a game. The first was in 1980 vs the Braves, striking out the likes of Gary “Sarge” Matthews, Bob Horner, Chris Chambliss and Dale Murphy. The second was in 1982 vs the Mets. He struck out George Foster three times that day. In 1985, Soto struck out 14 Giants, including future managers Ron Roenicke and Bob Brenly, as well as former Red Dan Driessen. He struck out human windmill Rob Deer four times that day. Soto struck out 13 Astros in a 1984 game, including Ray Knight. With 1449 Ks, Soto is second on the Reds’ career strikeout list behind Maloney.

Ewell Blackwell struck out 14 Cubs in a 1950 complete game victory, including slugger and 1952 MVP Hank Sauer. Blackwell pitched ten innings that day. In 1948 he managed 13 strikeouts in a nine inning game, also against the Cubs. This time Hank Sauer was playing for the Reds instead of against them. I wrote aboutÃ‚Â Blackwell in more detailÃ‚Â HEREÃ‚Â and HERE.

Mr. Back-to-Back No-hitters, Johnny Vander Meer struck out 14 batters in a game three times. The first came in 1941 against the Cardinals, who were led by Hall of Famer Johnny Mize. He did it again in 1943 vs the Boston Braves, when he also issued nine walks in the game. In 1946 he struck out 14 Brooklyn Dodgers (including HOFer Pee Wee Reese three times) while pitching the first 15 innings of a 19 inning game that ended in a 0-0 tie! In 1942 Vander Meer whiffed 13 Phillies in a 2-0 complete game victory.

Rube Benton was the first Red ever to strike out 13+ batters in 1915. In fact it didn’t happen again until 1941. He pitched 15 innings in that game andÃ‚Â K’d 14 Brooklyn Dodgers (including Casey Stengel three times). The left-handed Benton played nine seasons for the Reds and won 84 games. He was known for wildness, leading the league in hit batsmen more than once and walking nearly as many as he struck out.

Some other Reds’ pitchers who punched out 13+ batters in a game include familiar names like Mat Latos who did it twice. Once vs the Brewers in 2012 (Ryan Braun and Rickie Weeks 3x each) and against the Diamondbacks in 2013. Edinson Volquez struck out 13 members of a terrible Pirates team in 2008, his first season as a Red following the Josh Hamilton trade. Aaron Harang struck out 13 batters of a first place Cubs team in 2007.

Tim Belcher did it in 1992 vs a Padres team led by Gary Sheffield and Fred McGriff. Going back to the Big Red Machine days, Fred Norman achieved the feat in 1974 against Lou Brock and the Cardinals in a 1-0 complete game loss in which NormanÃ‚Â made an error to allow the only run of the game to score. Jim Merritt did it in 1970 vs the Mets in a 6-1 complete game win in which all the runs scored on home runs by Johnny Bench, Lee May and Tony Perez. In the 1960’s Joey Jay struck out 13 Dodgers in 1964. Sammy Ellis did it that same year vs the Cubs, led by Hall of Famers Lou Brock, Billy Williams, Ron Santo and Ernie Banks.

Now you know just how rare Raisel Iglesias’ 13 strikeout gem was. Games like that don’t happen often, so when we do get to see one it is funÃ‚Â to place it in its proper place in history.