The Cincinnati Reds were well on their way to their tenth consecutive loss on Monday evening. Reds starter Keyvius Sampson allowed a three run home run to J.D. Martinez in the first inning. Tigers starter Buck Farmer had a no-hitter going into the fifth inning. And after five innings in the Queen City, it was 5-0 Tigers.

Then the sixth inning happened.

Schumaker began the inning by grounding out. It would be a while before another Reds batter was retired.

The bases were loaded, and Ivan De Jesus Jr. came in to pinch-hit. He struck out, and Skip Schumaker came to the plate for the second time in the inning. Schumaker quickly fell behind 1-2, but was then able to rip a pitch to centerfield to give the Reds a 6-5 lead. But the Reds weren’t done.

The Reds put together a 10 run, 6th inning. It was the most runs the Reds had scored in an inning in ten years. All it took for the Reds to avoid double-digit consecutive losses was one big double-digit scoring inning.

The Reds bullpen pitched five scoreless innings, and Joey Votto added a moon shot in the 8th inning.Ã‚Â Aroldis Chapman finished off a 12-5 win for the Reds. 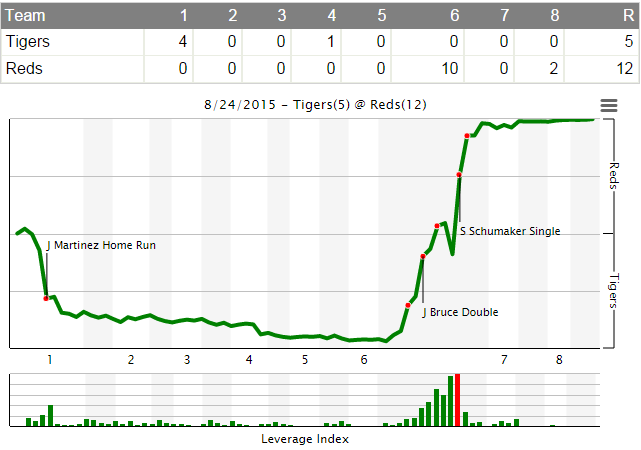 According to FangraphsÃ‚Â WPA statisticÃ‚Â (winning percentage added), the most important play of the game wasÃ‚Â Skip Schumaker’s 2-RBI single in the 6th inning with 2 outs, giving the Reds a 6-5 lead (video).Ã‚Â That play increased the Reds chances of winning by 34.7% (from 41.0% to 75.7%).

Eugenio SuarezÃ‚Â had a 3-hit game. This guy just continues to hit. Suarez had two big hits in the 6th inning, including a solo home run and a 2-RBI double. It had to feel good for Suarez to beat up on his former team.

Joey Votto continues to make Marty Brennaman look like the absolute fool that he is. VottoÃ‚Â walked three times (once intentionally), and hit a 2-run bomb in the 8th inning.Ã‚Â Votto now has a .999 OPS (it was .863 on July 6th). Votto also now has a 172 wRC+, which ties him with Mike Trout (Angels are off tonight) for the 3rd best in all of baseball.

Lost in the excitement was the fact that this is Votto's 10th 3 BB game of the season, most by a Red since at least 1914. #Reds

New RedÃ‚Â Collin BalesterÃ‚Â pitched two scoreless innings in relief following Sampson, which allowed the Reds offense a chance to get back in the game.

The rest of theÃ‚Â Reds bullpenÃ‚Â was great too. Badenhop, Hoover and Chapman each pitched a scoreless inning of relief.

Keyvius SampsonÃ‚Â was pretty bad for a second straight start. Pitchers who weren’t good in the minors tend not to have continued success in the majors in the same season, so this shouldn’t be a surprise. Sampson does have some really good stuff, so he should still figure into the fight for a rotation spot in 2016.

Any win hurts the Reds chances of the #1 draft pick in 2016. We will just enjoy the fun win tonight though.

I like the Bengals, and consider myself a fan. However, I am a strong advocate that Cincinnati is a baseball town first and foremost. It was nice to see the Reds steal the spotlight from many fading baseball fans while the Bengals got their teeth kicked in during a pre-season Monday Night Football game. I’ve always said that I would rather see the Reds win a playoff series than the Bengals win the Super Bowl any year.

John Lamb will get another shot at the Dodgers after pitching pretty well against them last week. The Reds will begin a three game series against the Dodgers tomorrow to finish the homestand.