Another day, another loss for the Cincinnati Reds.Ã‚Â You can mark that down as seven straight losses. Even the cool “Los Rojos” jerseys for Tony Perez weekendÃ‚Â couldn’t bring the Reds any good luck.

David Holmberg pitched poorly again for the Reds. He gave up a home run to the second batter of the game, A.J. Pollack, to give the Diamondbacks a 1-0 lead.

Holmberg settled down and made it through the first three innings without allowing another run. The fourth inning was not so kind to young David. He allowed a leadoff home run to Yasmany Tomas. Holmberg allowed another run on a sac fly later in the inning. He then loaded the bases after hitting Paul Goldschmidt with a pitch. Then the Diamondbacks catcher, Wellington Castillio, drilled a pitch right at Eugenio Suarez, who showed that he is not Zack Cozart. Two more runs scored, and “all of a sudden” it was 5-0.

The Reds fought back, and after a Joey Votto home run in the 8th inning cut the deficit to 5-3. The Diamondbacks got that run back in the top of the 9th, and held on to win 6-3. The Brewers won tonight, so the Reds areÃ‚Â officially in last place in the NL Central for the first time in 2015. 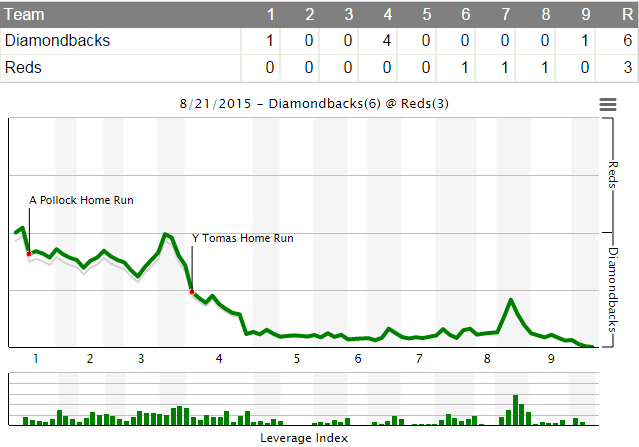 According to FangraphsÃ‚Â WPA statisticÃ‚Â (winning percentage added), the most important play of the game wasÃ‚Â David HolmbergÃ‚Â allowing a leadoff home run to Yasmany Tomas in the 2nd inning, giving the Diamondbacks a 2-0 lead.Ã‚Â That home run decreased the Reds chances of winning by 11.6% (from 35.6% to 24.0%).

Brayan PenaÃ‚Â had three hits, including a pair of doubles tonight.Ã‚Â He also made an epic slide to avoid the Diamondbacks catcher Wellington Castillion after the throw beat him.

Mad at Votto right now because if it weren't for him, we'd easily have the #1 pick next year

Sam LeCureÃ‚Â is off to a pretty great start after returning to the big leagues on Wednesday. LeCure pitched two hit-less innings tonight, striking out two, while walking one. LeCure has pitched four hit-less innings since being called up (4 K, 1 BB).

David HolmbergÃ‚Â is not an MLB starter. Well, he is only 24 years old, so I guess you never know. Holmberg now has a 6.57 ERA and 7.61 FIP through his first five starts. That is not good. Maybe Holmberg can develop into a nice LOGGY.

Eugenio SuarezÃ‚Â went 0 for 4, and misplayed a ball (really should have been scored an error) that would have saved the Reds two runs. Suarez has been awesome this year, but tonight was a quick reminder that he is indeed a rookie.

Marlon ByrdÃ‚Â made a pretty big splash in his Giants debut tonight. In his first AB as a Giant, Byrd homered off the Pirates Jeff Locke (video). In his second AB as a Giant, he singled. In his third AB as a Giants, he doubled.

Former RedÃ‚Â Johnny CuetoÃ‚Â did not fare as well as Byrd tonight. Cueto allowed 13 hits and 7 runs (6 earned) to the Red Sox at Fenway Park tonight.

The Diamondbacks red matte batting helmet and black jersey combo was just awful. The helmet and the jersey were fine if they were alone, but together it was a disaster. 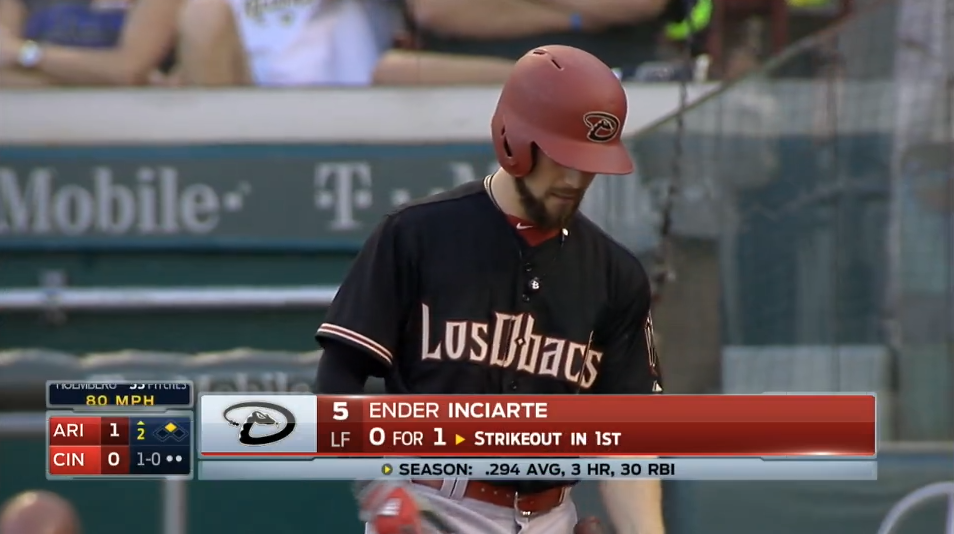 Ya, and Skip Schumaker is not good. Just stop.