The Reds’ pitching staff right now looks a lot different than it did on Opening Day. Johnny Cueto, Mike Leake, Jason Marquis and Kevin Gregg were here then but are gone now. The Reds have used 25 different pitchers this year as they tried to patch holes and stay competitive. The results have not been very good and are likely to get even worse as the season winds down. The rotation is composed exclusively of rookies that are likely to make the following numbers even less attractive than they are now.

Let’s take a look at how the Reds rank in all the key pitching statistics compared to the rest of the National League: 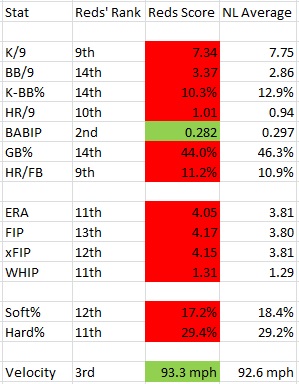 The team’s 4.05 ERA is 11th out of the 15 National League teams. Without Cueto’s 2.62 ERA and Leake’s 3.56 ERA it would probably be 14th, ahead only of the Colorado Rockies, the denizens of Coors Field in the Mile High City. The team has outperformed its FIP and xFIP, which are fielding independent pitching metrics. This has happened because of the team’s excellent defense helping to take away a lot of base hits from opposing batters. This is reflected in one of the green stats — BABIP, or batting average on balls in play. We have known for about ten years that pitchers have very, very little influence over the batting average of balls put into play, so when you see a BABIP that is below the .297 league average it is due to the quality of the defensive players. The Reds have been at or near the top of all defensive metrics since 2009.

Reds pitchers are not too bad at striking batters out. They are slightly below average but still in the realm of respectability. They are 9th in the league with their 7.34Ã‚Â K/9 but not that far from the 7.75 K/9 league average. The biggest problem has been walks. The Reds are second to last in walk rate. Both Cueto and Leake were excellent at limiting walks. Raisel Iglesias is the only remaining starter with a good walk rate. Lorenzen and Holmberg have atrocious walk rates. The high numbers of walks issued by the pitching staff has led to a very poor 10.3 K-BB%, which is also next to last in the league, ahead of only the Rockies. K-BB% is the most important metric for pitchers and is almost infallible at predicting success or failure. The team’s strikeout rate needs to make some stridesÃ‚Â but the walk rate needsÃ‚Â to make huge leaps in the right direction.

Playing in Great American Ball Park makes it a challenge to limit home runs due to the 113 park factor for long balls (that mean GABP allows 13% more homers than the average stadium). The Reds are 10th in the league in allowing 1.01 home runs per nine innings, but considering the ballpark that is not that bad. The best way to limit home runs is to induce a lot of ground balls. This is another thing the Reds are not good at doing. They are once again next to last in this stat. There are two keys to getting ground balls, one is to throw sinking pitches. The other is to have good enough command to keep your pitches in the bottom of the strike zone. Reds pitchers don’t even have good control, so obviously they don’t have good command either. Control is the ability to throw strikes. Command is the accuracyÃ‚Â to locate pitches in the desirable parts of the strike zone; to “hit your spot” so to speak. The walk rate and the ground ball rate are going to go hand in hand to some degree. The pitchers will need to develop the ability to throw strikes and avoid walks before they can be accurate enough to induce a high rate of ground balls and limit home runs.

HR/FB, or home runs per fly ball allowed, is largely independent of the skill of the pitcher. To limit home runs you need to limit fly balls, which tend to leave the yard at the same rate regardless of who the pitcher is. This stat is certainly affected by ballpark though, so we would expect Reds pitchers to give up a few more home runs per fly ball than pitchers in San Francisco or Pittsburgh where it is hard to hit home runs because of the dimensions of the ballpark and/or the atmospheric conditions such as altitude, humidity, wind and temperature. Given that GABP is a homer-friendly ballpark and the fact that the Reds allow a lot of fly balls it is a bit surprising that the Reds are only slightly worse than average in this stat.

The Soft% and Hard% indicate how hard the ball is hit. Obviously you want to force the batters to hit the ball softly. Once again the Reds are subpar on these metrics as well. Reds pitchers give up harder contact than normal.

The Reds do one thing very well: throw the ball hard. Aroldis Chapman helps this stat a lot, but he is not the only one. Several of the Reds pitchers have excellent velocity, including Jumbo Diaz, Michael Lorenzen, Homer Bailey (when healthy), J.J. Hoover and Nate Adcock. David Holmberg and Dylan Axelrod have very low fastball velocity. It is hard to strike out batters with slow velocity. It is hard to control high velocity. Fast pitchers with good control and command are the holy grail.

The bottom line is the pitching staff is a major problem right now. The bad news is the pitching staff is full of rookies with little experience and a lack of veteran leadership to guide them. The good news is the pitching staff is full of rookies with lots of room to grow and develop into experienced veterans. That’s right, the bad news and good news are the same news. The Reds have a large selection of promising young starting pitchers in the system (I ranked them from #1 to #27 here). Some of those young guys are going to become very good pitchers. The problem is going to be figuring out which ones. That is going to take quite a bit of time. My guess is next year’s chart will show a lot more red than green once again.

The offense is poor too (it ranks 10th in runs per game), but that is a topic for another column.