Without baseball, I would not exist.

About eighty years ago, my grandfather was playing in a club baseball game in Fairmount. At some point he began backing towards the bleachers to catch a foul ball.

It hit Florence Niemeyer of the Red Top Brewing Company, sitting along the basepath with friends. Later he made his way over to apologize. Thus, here I am, along with my mother, three uncles, and six cousins.

And so bad baseball created a good family. I have been thinking on this all season, watching balls sail over bullpen pitchers’ heads and baserunners patiently awaiting the RBI that never comes. It is, the front office tacitly admitted as it dealt Johnny Cueto and Mike Leake, a broken team.

In an era when teambuilding decisions are driven by free agency and the fear of it, families don’t much exist in clubhouses anymore. The players come, the players go. Some surface through the farm system and stay a while, but mostly, they go. Faltering teams are quickly patched by one or two-season rentals, then rent apart and left broken again until the next piece is snapped temporarily into place.

This isn’t to say that teams which are truly broken don’t occasionally shine from their jagged edges. There are Home Run Derby championships and flashes of leather and the shutouts over bitter rivals. 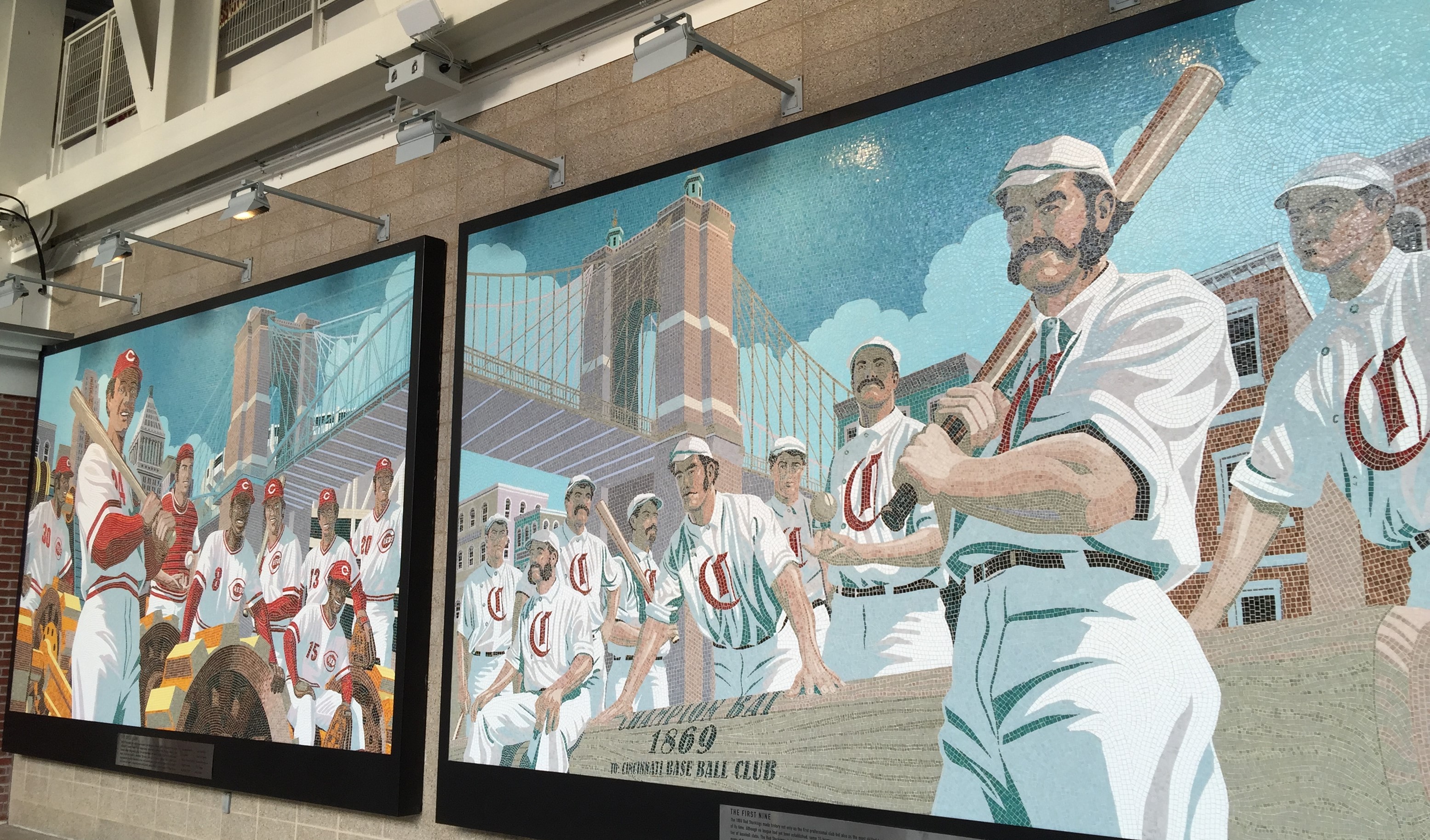 team and the Big Red Machine with mosaics inside Great American Ball Park. Made of a multitude of tile pieces, they are close scatterings of blue, red and brown chips; only from a distance can we see the features of Harry Wright, of Tony Perez, of the baseball leaping from Johnny Bench’s hand.

Baseball was a scattering of pro-am teams before Wright and his brother gathered the best there was and paid them all a salary; after the team folded despite a 57-game winning streak, the state of baseball in Cincinnati drifted like leaves on the river again for seven more years. And the Big Red Machine, assembled from the pieces of a team so battered it almost departed the city, fell apart so hellishly that the Reds experienced a franchise-worst season in 1982. That, too, was fitting–that the magnificent apex should be mirrored by the most humbling of sinkholes.

What I like best about the mosaics is that while visually connected by the Roebling Suspension Bridge, they’re mounted separately from the stadium wall.Ã‚Â  They can be moved. They may be rearranged as future circumstances dictate. There is room in the wide concourse for further masterpieces– just as the leaderboard in the Reds Hall of Fame and Museum changes week to week, the story of this team extends and extends, pitch to pitch, game to game, season to season.

We didn’t want to see Cueto in a Royals cap or read Leake’s stats in a Giants box score, but take comfort, oddly, in the unknown. We’re standing just days out of the trade, staring point-blank at these two missing pieces, the gaps they left. There’s no way yet to back up and see what kind of picture this slivered team, this infuriating, charismatic collection of talented fourth-placers, will eventually create.

It will be a long step into winter before we do.

In the meantime, we exist.