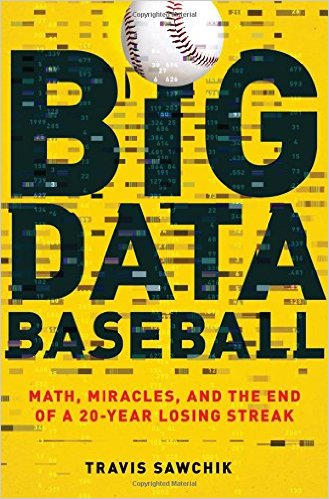 Travis SawchikÃ¢â‚¬â„¢s new book Big Data Baseball: Math, Miracles, and the End of a 20-Year Losing Streak is wonderful. Even though its primary subject is the Pittsburgh Pirates (Sawchik covers the Pirates and MLB for the Pittsburgh Tribune-Review) it is must reading for anyone interested in modern major league baseball, regardless of which baseball cap you wear when you’re cheering.

But what separates BDB from most writing about the use of analytics in baseball is that Sawchik does a masterful job of storytelling. The reader gets to know the background and personalities of the important figures in the Pirates organization. That’s important because Big Data Baseball shows that the Pirates resurrection was as much about people as it was regression equations.

BDB begins with a captivating account of the fateful October 2012 meeting between Pirates general manager Neal Huntington and Pirates manager Clint Hurdle. The two men met at Hurdle’s home and that’s when Huntington, age 43 at the time, made the case to his veteran manager for the need to overhaul the way the organization approaches the game of baseball.

Led by Huntington and Hurdle, the Pittsburgh Pirates did just that. Twelve months after that meeting, they were playing in the fifth game of the NLDS.

Sawchik takes the reader behind the scenes to show the complex interpersonal dynamics that were involved in bringing about this revolution. It involved new thinking by the front office, the manager creating a culture of respect for outsiders, and winning the buy-in of old-school coaches and intuition-based players who had to overcome lifetimes of habit.

We learn from the outset that Clint Hurdle Ã¢â‚¬Å“was raised on and believed in old-school, twentieth-century baseball orthodoxy, which suggested that statistics often lied and that subjective decisions were most important, and that only those who had played the game could understand it meaningfully (BDB, p.26).Ã¢â‚¬Â

In other words, the Pirates manager was the kind of person you would least expect to be willing and able to adopt new thinking and practices. But Hurdle became a true believer and fierce advocate for incorporating advanced data into the decision making of the baseball team he manages. That transformation led to his winning the Sporting News Manager of the Year Award in 2013.

Sawchik takes us back to the birth and development of defensive data, which John Dewan started cataloging in 1984. BDB then tells the fascinating story of how the Pirates became league leaders in defensive shifting. It involved spray-painting XÃ¢â‚¬â„¢s and OÃ¢â‚¬â„¢s on their practice fields. It involved the faith that the players would actually stand where they were told on Opening Day. It involved the positive reinforcement of turning batted balls into outs.

Pirate data analysts convinced Huntington of the value of pitch framing by catchers, an attribute not commonly appreciated in 2013. The Pirates general manager then focused on signing free agent Russell Martin, the best pitch framer on the market. Martin said it made a difference that the Pirates were the most aggressive team recruiting him. They also put their money where their metrics were, offering the catcher $17 million over two years. The Pirates numbers guys said he was worth it, and they were right. Over the two seasons, Martin gave the Pirates production that would have been worth $65 million on the open market.

Ã¢â‚¬Å“And the rest of the industry wasnÃ¢â‚¬â„¢t quite ready to buy into pitch framing the way the Pirates had. What the public wasnÃ¢â‚¬â„¢t able to see was that Martin had just improved the Pirates by nearly 40 runs per season over their previous catchers, and it had nothing to do with his bat Ã¢â‚¬â€œ which everyone kept judging him by. It had nothing to do with performance stats that could be found on the back of a bubble-bum trading card (BDB, p. 72).Ã¢â‚¬Â

Hurdle took the Pirates commitment to defensive shifts to a next level. He reasoned that the club should look for pitchers who would throw more ground balls, hits that could be fielded by their newly positioned infielders. Hurdle recognized an emphasis on ground balls as a synergy between pitching style and defensive shifts. According to old-school thinking, a pitcher was a fly ball or ground ball pitcher by nature, and these Ã¢â‚¬Å“traits were thought to be hard to change. Moreover, for most of the gameÃ¢â‚¬â„¢s history no one had been recording ground-ball rates of hitters or pitchers (BDB, p. 123).Ã¢â‚¬Â

But the Pirates rejected that conventional wisdom and had their pitchers learn and throw two-seam fastballs. The spin and air resistance for that pitch was conducive to downward movement and, therefore, ground balls. Ã¢â‚¬Å“By simply changing pitch grips, some pitchers could change the nature of the balls in play against them (BDB, p. 124).Ã¢â‚¬ÂÃ‚Â The Pirates also emphasized pitching inside. Their analysts had discovered by combing through the data that batters tended to hit more ground balls right after they had been pitched inside. The Pirates went from middle-of-the-pack in 2012 to leading the major leagues in ground-ball percentage in 2013 and 2014. They have the top ground-ball percentage again in 2015.

Today, the Pittsburgh Pirates are known as a Ã¢â‚¬Å“data-heavy, forward-thinking organization that deploys analytics heavily in decision making (BDB, p.168).Ã¢â‚¬Â The Pirates experience shows it doesnÃ¢â‚¬â„¢t take a lot of money to be a smart, modern baseball team.

It just requires understanding and a commitment to the idea. Staff members from the Pirates analytics department sit in on preparation meetings with coaches and players for every series. Number crunchers travel with the team on road trips.

Ã¢â‚¬Å“By the 2012-13 off-season, the Pirates had largely removed traditional statistics to measure pitchersÃ¢â‚¬â„¢ performance. Neal Huntington rarely cited ERA, wins or hits allowed when evaluating a pitcher. The Pirates tried to separate a pitcherÃ¢â‚¬â„¢s performance from his environment as much as possible.Ã¢â‚¬ÂÃ‚Â That modern thinking produced Francisco Liriano and A.J. Burnett.

The Pirates no longer provide their manager data on hitter-pitcher histories, because studies have proven those histories are small samples and are unreliable predictors of the future. The Pirates get that. Instead, the prepare for match-ups by mapping how a hitter has performed against 15 pitchers similar to the one heÃ¢â‚¬â„¢s facing that day, based on handedness, velocity and pitch types.

In 2013, the Pirates had 5 full-time employees devoted to data analysis, collection and architecture. In 2014, they added a full-time quantitative analyst that works year round with the minor league clubs. The Pirates have installed PITCHf/x and TrackMan in every one of their minor league parks.

The immediate subject of SawchikÃ¢â‚¬â„¢s book is the Pittsburgh Pirates’ 2013 season. But thatÃ¢â‚¬â„¢s not its primary concept.

Big Data Baseball is a book about successful organizational change.

Hurdle: Ã¢â‚¬Å“The game is changing. Sometimes you to need to change with the game or it will pass you by (BDB, p.103).Ã¢â‚¬Â

Advanced data collection is skyrocketing. Baseball has moved from no electronic data collection to radar guns, to PITCHf/x (2008), to TrackMan (2013) and now Statcast (2015). Those technologies have been installed in every major league park by MLB. The data is turned over to each club. In terms of major league game data collection, all the teams are equal.

What a club does with that torrent of raw data depends on the priority it places on Big Data baseball and adapting to change.

To capitalize on what the league provides them, teams must employ data science experts and mathematical minds who can create algorithms to make sense of it. Data architecture. The teams who place emphasis on getting value from the data have a growing advantage.

At its core, the lesson of Big Data Baseball isnÃ¢â‚¬â„¢t about defensive shifts, pitch framing and ground balls. Just two years after the Pirates parlayed those strategies into their first postseason appearance in two decades, everyone knows those strategies work now.

BDB is about being smart and nimble enough to figure out and implement whatÃ¢â‚¬â„¢s next. And what’s next after that.