The Reds winning ways against their rival St. Louis Cardinals didn’t last long. The Reds won a series in St. Louis last week, and won the first game of this series in Cincinnati. However, the Reds blew a three-run lead last night and lost in 13 innings, and then got shutout in the series finale 3-0.

Today’s game was delayed by over an hour at the start. It was a rainy, dreary day in the Queen City. There was multiple times the game had to be stopped in order to make the mound somewhat pitch-able.

The game was scoreless until the fourth inning. Reds starter Michael Lorenzen then allowed a two-out RBI single to the Cardinals catcher Tony Cruz, and the Cardinals lead 1-0. LorenzenÃ‚Â was able to strand the bases loaded in the inning, and avoid any further damage.

Michael Lorenzen got into more trouble in the fifth inning. Loreznen allowed a leadoff double to Matt Carpenter, and hit Stephen Piscotty with a pitch. Lorenzen was then able to get Jason Heyward out on a fielders choice, and strike out Randal Grichuk, despite it appearing as if he was trying to pitch around him. The Cardinals two-out magic continued again, as Kolten Wong smacked a single up the middle to give the Cardinals a 3-0 lead.

The Reds bullpen did their job, but the Reds offense could not. The Reds were shutout for the eighth time this season, and lost by a final score of 3-0.

According to FangraphsÃ‚Â WPA statisticÃ‚Â (winning percentage added), the most important play of the game wasÃ‚Â Michael Lorenzen allowing a 2-run single to Kolten Wong with 2 outs in the 5th inning, giving the Cardinals a 3-0 lead.Ã‚Â That play decreased the Reds chances of winning by 18.2% (from 32.6% to 14.3%).

Brandon PhillipsÃ‚Â now has a 7-game hitting streak. Phillips has collected 14 hits over his last 7 games. The beginning of his streak was his 7-RBI game against the Pirates on July 30th. Phillips has not walked during his streak.

Eugenio SuarezÃ‚Â collected two hits, and now has a 5-game hitting streak. Suarez has been outstanding offensively for the Reds. He is now hittingÃ‚Â .301/.330/.452 with a 112 wRC+.

If this was his third or fourth year in the big leagues, you probably wouldn’t findÃ‚Â Michael Lorenzen’sÃ‚Â name in the positive section of this recap. However, with all things considered, I’d say Lorenzen’s start today was a positive one. Lorenzen came out strong despite the rain delay, and shut the Cardinals down through the first three innings (didn’t allow a hit). Lorenzen didn’t allow many hard hit balls, and kept the ball in the yard.

The biggest issue with Lorenzen continues to be the walks. He walked four batters in five innings today, and now has a 5.14 BB/9 this season. That number will not keep Lorenzen in the rotation when the Reds start competing again. He is still only 23 (!) though.

Burke BandenhopÃ‚Â pitched a scoreless inning of relief, and now hasn’t allowed an earned run in 15 consecutive appearances. He now amazingly has his ERA down to 3.92. It was once 15.43 on April 27th, and 7.50 in early June.

TheÃ‚Â Reds offenseÃ‚Â was shutout for the 8th time this season. That is never fun.

Here are some good news and notes for the Reds minor leagues from C. Trent Rosecrans of the Cincinnati Enquirer today. Adam Duvall has to be close to being called up. Maybe the Reds are waiting until Byrd is moved via the waiver wire.

Ã¢â‚¬Â¢ Adam Duvall of the Bats has hit a home run in three of his first four games in Louisville. He leads the minors with 29 home runs so far this season.

Ã¢â‚¬Â¢ Cody Reed was fantastic last night, striking out 12 in eight innings for the Blue Wahoos in his second start of the season. That was a season-high for Pensacola.

Ã¢â‚¬Â¢ Keury Mella made his debut for high-A Daytona and picked up the win. He allowed a run on three hits over five innings.

The American League wild-card race is absolutely awesome right now. In a lost season for the Redlegs, this is certainly something fun to watch. There are eight teams that legitimately have a shot at one of the two wild card spots. 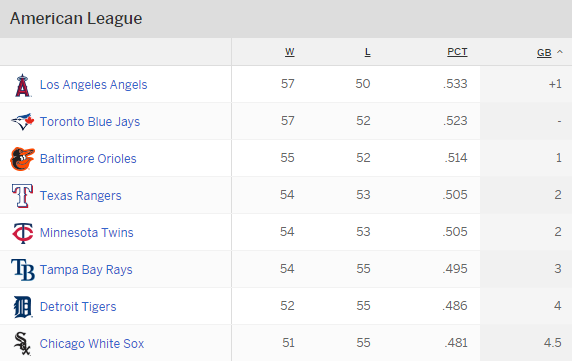