The Reds got off to a quick start in route to their third consecutive win over the St. Louis Cardinals. The Reds began the first inning with back-to-back singles by Phillips and Votto. Later on in the inning, back-to-back doubles by Bruce and Byrd gave the Reds a 2-0 lead. Eugenio Suarez hit another single in the inning to give the Reds a 3-0 lead. That would prove to be all the runs the Reds would need.

The Cardinals cut the lead to 3-2 in the third inning on a Matt Carpenter 2-run home run. That was all Reds starter Anthony DeSclafani would allow. DeSclafani got the Reds through six innings with a 3-2 lead. DeSclafani put together one of his best starts of his young career, as he stuck out nine batters without allowing a walk.

Badenhop, Hoover (with the help of an incredible catch from Billy Hamilton), and Aroldis Chapman were able to hold the Cardinals scoreless in the 7th, 8th, and 9th, to secure a 3-2 win. The Reds have now won five of their last seven games. 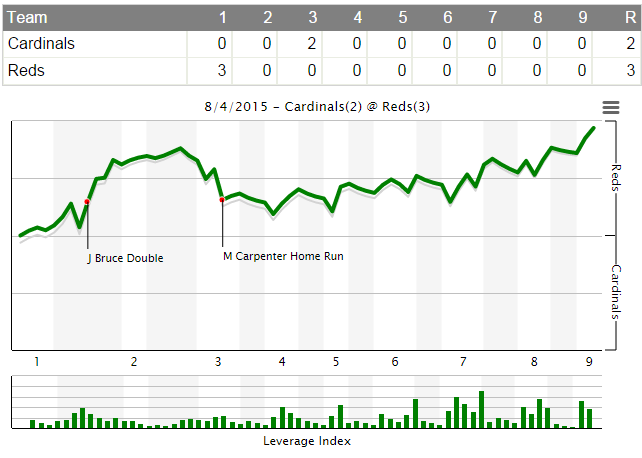 Outside of a mistake to Matt Carpenter in the third inning, DeSclafani was absolutely outstanding tonight for the good guys. I am sure DeSclafani is getting close to his innings limit (which the Reds have not publicized). DeSclafani’s career innings high was last year when he pitched a total of 162.1 innings. He is currently at 126.0 innings.

DeSclafani’s first season with the Reds has to be considered a smashing success, and the trade of Latos for him was a huge win for the Reds. DeSclafani’s numbers on the year: 21 GS, 3.71 ERA, 3.88 FIP, 6.79 K/9, 3.39 BB/9, 0.79 HR/9. The most impressive number is his 0.79 HR/9. He didn’t pitch a lot in Miami, but that is huge for a guy switching from the big home Marlins park to the small GABP. Right now, he has to be considered the Reds ace, at least until Homer Bailey returns.

Billy HamiltonÃ‚Â made one of the best catches of the year in the 8th inning. It was an important catch too, as it was the leadoff hitter (Jason Heyward) of the inning. It would have at least been a double, which would have been trouble for J.J. Hoover in 1-run game.

After having his 21-game on-base streak snapped on Saturday (then getting the day off Sunday), Joey VottoÃ‚Â was back to being the on-base-machine. Votto reached base two more times (single and walk) on the night. His single in the first inning put him in some pretty elite company, as he had reached base in 60 of his last 100 PA at that point. It really is a beautiful thing to see Joey make cranky old Marty Brennaman look like a fool night after night. Marty of course said that VottoÃ‚Â is “no longer one of the elite players in the game” back on July 5th. If you think I’m not going to continue to blast Marty night after night about this…..well, I’m sorry.

Brandon PhillipsÃ‚Â had a 2-hit night.

Todd Frazier’sÃ‚Â second half struggles continue. Frazier went 0 for 4 on the night. He grounded into a double-play with runner on 1st & 2nd in the first inning, and also struck out later in the game. Frazier entered today hitting just .180/.250/.344 with a 61 wRC+ since the All-Star break. Let’s hope this is just a slump, and not the beginning of the Reds regretting not trading Frazier when his value was sky high.

Thom BrennamanÃ‚Â tried his hardest to take a shot (like his dad) at Joey Votto. Thom went on a rant that Matt Carpenter is onlyÃ‚Â 40 points lower in average, and has just 5 less HR than Votto, butÃ‚Â Votto is pitched differently because he hits third (thanks to @_ouipa_ for the quote). Then he went to RBI numbers. Thom was trying to insinuate that Carpenter is about as good as Votto. What is it with these Brennamen, and their constant attacking and discounting of Joey Votto? I am so tired of it. Oh, and FWIW, Votto’s OPS is 157 points higher than Carpenter (.964 to .807). That is more than the 153 point difference between the career OPS of Albert Pujols (.985) and Matt Stairs (.832).

That was only the Cardinals 39th loss of the season. The Reds lost their 39th game in June. It’s August. Gulp. The sad thing is that the current Reds lineup is just as good as the current Cardinals lineup.