If they stick around long enough, baseball general managers tend to get reputations. Jim “Ralph” Bowden would chase a five tool prospect for years. Wayne Krivsky never met aÃ‚Â two-yearÃ‚Â contract extension he didnÃ¢â‚¬â„¢t like. Billy Beane’s approach was detailed inÃ‚Â Moneyball, while Brian Sabean is perceivedÃ‚Â to put moreÃ‚Â emphasis on scouting and intangibles. Ã‚Â The reality is neverÃ‚Â this simple, but the reputations persist.

In Cincinnati, Walt Jocketty is known — criticized, really — for a fewÃ‚Â perceived quirks. Namely, that he has too much loveÃ‚Â for ex-Cardinals and a soft spot forÃ‚Â past-their-prime utilitymen. The result: The Reds great core of talent has been surrounded by anemic, inflexible benches. It feels like every year, some former Cardinal puts up a stinker of a season for the Reds, and is never seen in the majors again. But is that perception true?

I looked at the six Reds rosters primarly crafted by JockettyÃ‚Â (2010-15). (He was hired in late April 2008.) Specifically, I looked for players (1) who Jocketty either brought to the Reds or re-signed at age 30 or older, and (2) never played a game for another team after leaving the Reds.

IÃ‚Â found 16 different players that fit the mold.Ã‚Â This includes this yearÃ¢â‚¬â„¢s crop of five(!) generally-underwhelming veteran acquisitions, some of whom are highly likely to play again (Byrd and Badenhop, anyway). (I skipped organizational filler guys who were called up mid-season, like Corky Miller, Kevin Barker, orÃ‚Â Jason Bourgeois. Every GM has to use fringy replacement-level guys throughout the season, and suchÃ‚Â guys have a strong likelihood of never making it back to the bigs.)

These areÃ‚Â actual veteran players who ended their careers with the Reds.

The list wonÃ¢â‚¬â„¢t call back many fond memories for Reds fans, but the sheer magnitude of mis-allocated playing time and money is staggering.Ã‚Â In their final seasons, these 16 guys combined for a bWAR of -6.1, at an average cost of $2.88M. Only two hitters were above average in OPS+ (Byrd (at 102 through July 29) and Edmonds (in only 32 PAs). Amazingly, Jason Marquis (ERA+ 59) was the most effective pitcher in the group.Ã‚Â  ElevenÃ‚Â of the 16 had negative bWAR, and the “best” season was Renteria’s 0.7 bWAR. Oh, and 10 of the 16 were former Cardinals.

Rolen is obviously a special case, and Edmonds was a reasonable, if failed pennant race pickup in 2010. A few of these other guys were very good acquisitions to begin with — Lincoln, Ludwick, and even Cairo. The problem came when Jocketty doubled down and signed each to a two-year contract extension. But others were obvious misfires on the day they were announced — Izturis, Hannahan, Harris, Marquis, Gregg.

Let’s be clear: Ã‚Â These wereÃ‚Â all very good major league baseball players, with long, successful careers. The point is just that Walt Jocketty either acquired, or kept them for (at least) a year too long.

And Jocketty’s record isn’t 100%Ã‚Â horrible, either. He let others pay the final(?) contracts for Bronson Arroyo, Alfredo Simon, Arthur Rhodes, Francisco Cordero, and David Weathers. Orlando Cabrera (2010: 537 PA, $2M, -.06 bWAR) isn’t on this list because the Cleveland Indians inexplicably signed him to be even worse the followingÃ‚Â year. WaltÃ‚Â recognized when Ryan Freel had nothing left in the tank, got Ramon Hernandez for him. Ã‚Â Then he moved Hernandez at a similar point, and later moved Ryan Hanigan out when he got more expensive.

While the numbersÃ‚Â look pretty awful, they’re hard to really analyze in a vacuum. We donÃ¢â‚¬â„¢t know whatÃ‚Â a similarÃ‚Â chart would look like for other teams.

Some things we know are true: Most clubs like veterans for their bench roles. Most players are pretty lousy in their last season (it wouldnÃ¢â‚¬â„¢t be their last season if they played well). ButÃ‚Â it’s hard to avoid the simple fact that every year since 2011, Jocketty has brought in a newÃ‚Â older veteran utility man. These guysÃ‚Â were being counted on to deliver significant contributions to a contending club, andÃ‚Â every single one of them wasÃ‚Â a complete flameout. Not just bad. Not just “negative WAR” bad. But “can’t get another job in baseball” bad.Ã‚Â And thanks to WaltÃ¢â‚¬â„¢s other perceived weaknessÃ‚Â — a stand-pat approach to the trade deadline — each of these guys had their struggles magnified during pennant races.

HereÃ¢â‚¬â„¢s the data (final salaries include buyouts, where applicable): 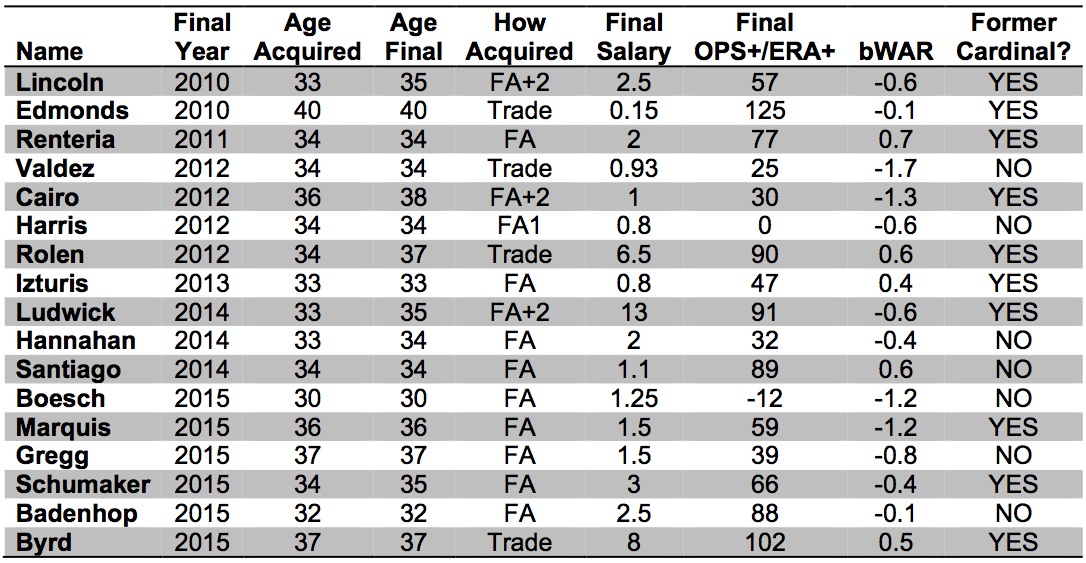