The Reds best pitcher of the last twenty years made his debut 491 miles northeast, in another country. Meanwhile, a young Reds pitcher who considered the former ace his mentor struggled to hold an early 3-1 lead. The result was the Reds three game winning streak snapped on a 5-4 loss, and brokenhearted Reds fans seeing their ace wearing blue.

Ivan De Jesus Jr. hit his fourth home run of the season in the second inning to give the Reds a 3-1 lead. The Reds added another run in the inning on a fielders choice, and lead 4-1.

The Pirates fought back, and tied the game in the 5th inning when Andrew McCutchen hit a solo home run off Michael Lorenzen. The Reds starter couldn’t make it out of the 6th inning after he loaded the bases on a walk. The Pirates would then get two of those runners to score off Jumbo Diaz, and took a 5-4 lead.

Marlon Byrd hit a solo home run in the bottom of the sixth to cut the deficit to a run. The Reds had a chance in the 9th inning. Phillips singled, Bourgeois bunted (lol), and then Votto walked for the fourth time in the game. Frazier hit a single to left, but Philips was thrown out by a mile at home plate. It was a pretty terrible decision to send the very-slow-running-Phillips-at-this-point-in-his-career by Steve Smith…..errrr I mean Jim Riggleman. Marlon Byrd then hit an absolute rocket, but Starling Marte made an incredible diving catch to end the game. 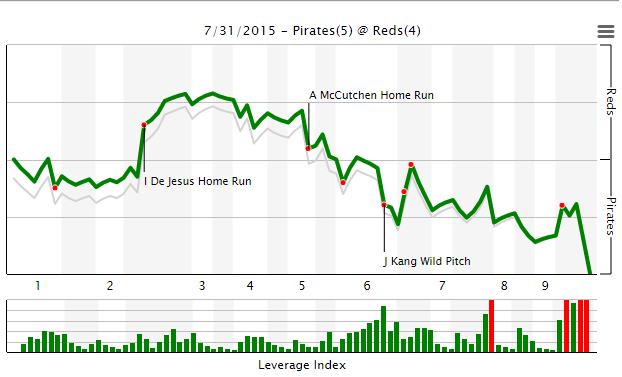 Ivan De Jesus Jr. hit his 4th HR of the year, a 2-run shot in the second inning giving the Reds a 2-1 lead. De Jesus Jr. was filling in tonight for Eugino Suraez at SS. De Jesus Jr. has done a good job capitalizing on his playing time. He has hit .281/.354/.461 with a 127 wRC+. He was once a second round draft pick back in 2005. There is a chance the Reds could have something in De Jesus Jr., but there is an even better chance the guy with a career .764 minor league OPS is just having a nice run like Kris Negron had last season.

Marlon Byrd hit his 18th long ball of the season. Keep hitting them out big guy….maybe someone will overpay for you on the waiver-wire.

Hoover, Badenhop, and Mattheus all pitched a perfect inning of relief. That is pretty good.

Brandon Phillips had a two-hit night, continuing on his incredible night yesterday.

Reds fans, tonight’s pitching performance is exactly what you should expect to see a lot in the near future. Michael Lorenzen looked good at times tonight (struck out six batters), but he had two really bad walks (he walked the pitcher and walked PH Travis Ishikawa and his .606 OPS to load the bases). Lorenzen’s final line on the night was: 5.2 IP, 6 H, 1 HR, 5 ER, 3 BB, 6 K.

Wins and losses are kind of a stupid thing to worry about with the Reds right now, but why Price didn’t pitch hit Bruce for Jason Bourgeois after Phillips leadoff single in the 9th is beyond me. Also, moving Votto out of the second spot is silly too.

Johnny Cueto made his debut tonight for the Royals. Cueto allowed three runs over six innings against a really good Blue Jays lineup (6.0 IP, 7 H, 3 ER, 2 BB, 7 K). Cueto had a lot of fun early in the game, as he was mixing up his delivery a lot. The Royals broadcasters (yes, I was watching probably more of Cueto’s debut than the Reds game tonight…I’m sorry) were really enjoying watching their new ace pitch. The Royals bullpen blew the 6-3 lead Cueto had when he left the game. Sorry Johnny, some things never change.

This is going to be fun! #royals #Cueto pic.twitter.com/Z0Ie8eAhQD

I will try to reserve judgement on the Reds front office until after the winter meetings. Jocketty did trade Latos and Simon then, and got good returns. I have to admit though that I was disappointed in the Reds lack of aggressiveness at the deadline.

I fully believe the Reds should have blown up their roster, and I especially believe the Reds missed a major opportunity to trade Todd Frazier at the highest value he will ever be at. I hate the idea of a “reboot” instead of rebuilding as Walt Jocketty said. I am worried the Reds are turning into the Philadelphia Phillies, when they should have been following the plans laid by the Astros and Cubs.