Eugenio Suarez is confusing. While with the Tigers, Suarez flashed enough potential in the minor leagues to becomeÃ‚Â DetroitÃ¢â‚¬â„¢s everyday shortstop after Jose Iglesias sustainedÃ‚Â stress fractures in both legs.Ã‚Â In 277 plate appearances, Suarez slashed .242/.316/.336 in 2014.

The aggregate numbers mask the amount of variation inÃ‚Â SuarezÃ¢â‚¬â„¢s 2014 campaign: in June he slashed .279/.364/.485 but in September that line collapsed to .200/.263/.200. In fact, his batting line deteriorated every month that he was with the Tigers. Despite his declining plate numbers, Suarez was still able to create positive value (0.8 fWAR) for the Tigers due to his defensive abilities.

In 2015, Suarez was once again pressed into service due to an injury, this time to Zack Cozart. To everyoneÃ¢â‚¬â„¢s surprised, Suarez has replaced almost all of the value Zack Cozart was adding to the everyday lineup. In 37 games, Suarez has already created 1.0 fWAR and would be on pace to create 3.5 fWAR over the course of 550 plate appearances. So, is this the Eugenio Suarez that the Tigers saw in the minor leagues? Or is another collapse around the corner?

The canaries in the coal mine

With so few observations (only 147 plate appearances in 2015), the behavior of quantitative batting data is not very stable. As I wrote about earlier this year, it takes a few hundred plate appearances for OBP to stabilize and many more before we can start to make inferences using batting average.

That necessary caveat aside, one number jumps off of SuarezÃ¢â‚¬â„¢s fangraphs page right away: .388 BABIP (for reference, Joey Votto is at .347). This is about seventy points higher than SuarezÃ¢â‚¬â„¢s xBABIP given his batted ball profile (.310). The xBABIP is much closer to what SuarezÃ¢â‚¬â„¢s BABIP was last year with Detriot (.316) over 277 plate appearances.

Yet we know that not all types of line drives or fly balls are the same. New exit velocity data helps us further refine these categories by examining the velocity with which the ball leaves the bat. SuarezÃ¢â‚¬â„¢s exit velocity data is not very encouraging: he is currently ranked 304th in average exit velocity at only 88.43 mph.

When you examine SuarezÃ¢â‚¬â„¢s batted ball profile, it becomes clearer what is going on when he puts the ball in play: Suarez has traded both line dries (down 5% from last year) and fly balls (down 9%) for more ground balls (up 14%). Furthermore,Ã‚Â Suarez pulls nearly half (46.7%) of his batted balls. The luck dragons are circling.

What about the future?

Suarez is only 23 years old and, given his talent and previous achievements, he very well may improve for the next few years. Here is an aging chart of short stops (from beyond the box score) 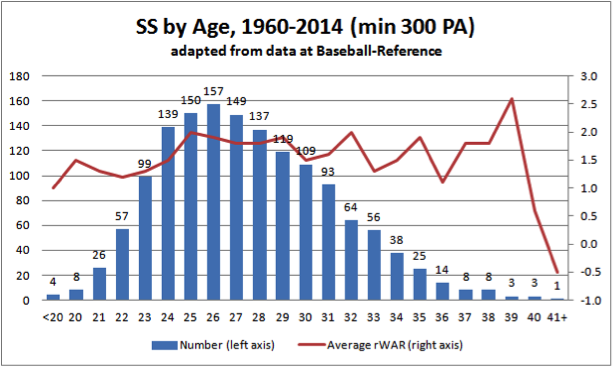 As you can see from this chart, shortstops seem to develop up till the age of 25-26 and then slowly decline afterward. There is a survivor bias in these data, so decline due to age is probably less pronounced and later than it is for a normal player. The general trend, however, that players improve up till the age of 25-26 generally holds across position. Furthermore, given the defensive demandsÃ‚Â onÃ‚Â shortstops, it might make sense that these players develop a little later than other positions.

For Suarez to prove himself as an everyday MLB shortstop he will need to improve his plate discipline. This year, SuarezÃ¢â‚¬â„¢s numbers are all trending the wrong direction: his swinging strike rate is higher this year (10.1%) than last year (9.0%) and he is swinging at more pitches outside of the zone this year (27.2%) than last year (24.5%).

I want to reiterate here: Suarez has fewer than 450 plate appearances at the major league level (he only has 424), thatÃ¢â‚¬â„¢s less than a full season of experience. He has also played in two different leagues with fewer than 300 plate appearances in either. Almost every day Suarez is stepping into the batterÃ¢â‚¬â„¢s box against a pitcher he ha1s never seen before.

His minor league numbers also indicate that he might have a better eye for the strike zone than we are seeing right now. His low BB% came in rookie ball, when he was only at 6%, but peaked in 2014 (AAA Ã¢â‚¬â€œ Tigers) at 11.5%. This was another small sample size, but he did post a 9.5% walk rate in AA ball through 496 plate appearances.

Over the next few months, expect SuarezÃ¢â‚¬â„¢s line to decline as fewer ground balls find holes in the defense. Despite this expected regression, Suarez will still provide quality defense in the field (0.4 DRS so far) and will probably provide the Reds with around 1.5-2.0 wins above replacement. The Reds have Suarez under contract through his age 30 season (2021) and he is not arbitration eligible until 2018 (when he will be 27). Given his current batting line it is not hard to see him as a 2.0 WAR player moving forward, with an upside around 3-3.5 wins if he is able to better control the strike zone.