Perusing the blogosphere and the twitter, reactions to the Johnny Cueto trade have been very mixed. Ã‚Â Some have hailed the three left-handed pitching prospects as a good haul for CincinnatiÃ¢â‚¬â„¢s former ace. Ã‚Â Others, however, have felt the deal fell well short of the mark theyÃ¢â‚¬â„¢d hoped to see for the best Reds pitcher since Jose Rijo.

Redleg Nation writers have already written great profiles on the three prospects that are now part of the Reds organization through this deal. Ã‚Â Therefore, please refer to those articles for in-depth biographical and analytical information on the new players:

The question I want to try to address is whether the return the Reds received matches what we should have expected given CuetoÃ¢â‚¬â„¢s combination of excellence and limited team control. Ã‚Â Michael Maffie did something similar to this last July when the Reds were rumored to be considering trades of their starters, but IÃ¢â‚¬â„¢ll take a somewhat different approach.

To start, I combed through transaction records (via mlbtraderumors) of the past four seasons in search of trades that met these criteria:

Therefore, I am not including trades like last JulyÃ¢â‚¬â„¢s Jeff Samardzija or David Price deals (both pitchers had more than a year of control left), the Jon Lester/Yeonis Cespedes deal (Cespedes was a major leaguer), or a salary dump like the Josh Beckett/Adrian Gonzalez/Carl Crawford Dodgers/Red Sox deal of 2012.

For each deal, I tried to find close-to-timely projections for major league players, and prospect ranks/ratings for the minor leaguers. Ã‚Â When possible, the projections were in-season ZiPS projections, or ZiPS projections dated as close to the trade date as I could find (sometimes from the following offseason). Ã‚Â In a few cases, I had make my own projection using a quick and dirty approximation of the Marcel method because I couldnÃ¢â‚¬â„¢t find any old projections online or on my hard drive for that player. Ã‚Â Prospect rankings were usually from the preseason prior to the trade, but when possible I used mid-season rankings and ratings. Ã‚Â Scouting ratings (explanation, scale) are those provided by Kiley McDaniel at FanGraphs, which are unfortunately only available for players since fall 2014. 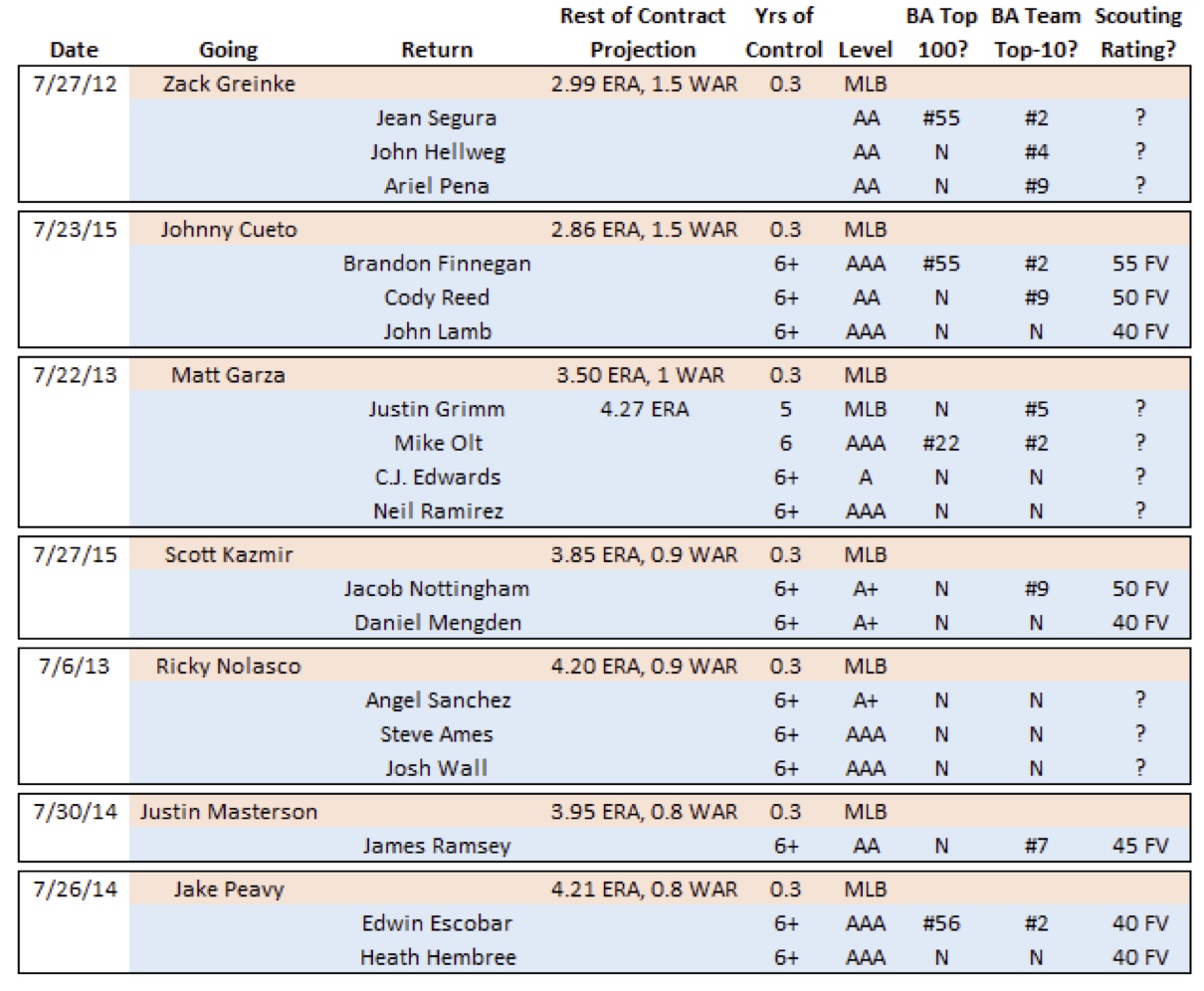 The list is sorted, roughly, by value changing hands. Ã‚Â Despite going back four seasons, there havenÃ¢â‚¬â„¢t been a lot of deals that fit the criteria. Ã‚Â The two best pitchers were unquestionably Zack Greinke and Johnny Cueto. Ã‚Â The two were extremely similar at the time they were dealt, to my eye. Ã‚Â Both were starters with an established track record of excellence and were just beginning to be recognized throughout baseball as legitimate ace pitchers. Ã‚Â The only real separator, if there is one, is injury risk. Ã‚Â Greinke, to my recollection, did not have any significant injury issues in 2012, having fully healed from a fractured rib he suffered during the 2011 preseason while playing basketball. Ã‚Â Cueto, though apparently healthy, has missed a few games this year due to a balky elbow, which reportedly did make some teams nervous.

Once you get past those two, the rest of the names are a collection of mid-rotation starters. Ã‚Â Some have continued to be solid pitchers (Peavy, Garza…sort of), while others have collapsed since their trades (Nolasco and Masterson).

If you look at the returns, they largely mirror those tiers. Ã‚Â HereÃ¢â‚¬â„¢s how IÃ¢â‚¬â„¢d rank them.

I think this is the best return of this list. Ã‚Â Jean Segura was the #2 prospect in the Angels system because their #1 prospect was a guy named Mike Trout. Ã‚Â Segura was immediately ready to contribute as a big-league regular shortstop. Ã‚Â The other two pitchers, Hellweg and Pena, were also on the AngelsÃ¢â‚¬â„¢ top prospect list. Ã‚Â They havenÃ¢â‚¬â„¢t panned out thus far, and Segura seems to have stalled after a nice rookie campaign in 2013. Ã‚Â Nevertheless, IÃ¢â‚¬â„¢m a firm believer that you have to judge a trade based on the information you have at the time. Ã‚Â Three top-10 club prospects, including one #55 prospect, is a nice return.

This is really close to what the Brewers got for Greinke. Ã‚Â Finnegan was also the Royals #2 prospect, and (amazingly) was also ranked as the #55 prospect in baseball in the preseason. Ã‚Â HeÃ¢â‚¬â„¢s a pitcher, though, and as such IÃ¢â‚¬â„¢d definitely rank Segura over him at that same point in their careers. Ã‚Â Nevertheless, Finnegan is a very well-regarded prospect. Ã‚Â And the others are all legitimate players who are close to big-league ready. Ã‚Â Reed is a rising star, and seemingly has taken a big step forward this season. Ã‚Â That is reflected in his emergence as the #9 starter on the BA midseason Royals prospect list. Ã‚Â Lamb could end up being nothing more than a #5 starter. Ã‚Â But he has pedigree, heÃ¢â‚¬â„¢s ready for the major leagues right now, and reports have it that his velocity might actually have finally returned after it abandoned him for years following Tommy John surgery.

On the surface, this return looks competitive with first two. Ã‚Â Mike Olt was a top-tier prospect heading into the 2013 season, with the best overall prospect ranking of any prospect on our list (#22). Ã‚Â But as 2013 began, he started encountering vision issues that led to troubles at the plate (.213/.317/.422 in AAA in 2013 with the Rangers). Ã‚Â Similarly, Justin Grimm was already 24, and had struggled in the first half of the season in the Texas rotation. Ã‚Â Therefore, both players had seen their value dip at least to a degree since their preseason rankings. Ã‚Â Matt Garza, of course, was not on the level of Greinke or Cueto, so weÃ¢â‚¬â„¢d expect the return to be less. Ã‚Â If your scouts still believed in Mike Olt–and itÃ¢â‚¬â„¢d be hard to convince me at the time that they should have abandoned hope–then this seems a good return for Garza.

In the case of Peavy, the return looks better on the surface than it was. Ã‚Â Escobar started the 2014 season as a top-100 prospect, but struggled badly. Ã‚Â By the 2015 preseason, he was off those lists, and barely even earned a mention in Kiley McDanielÃ¢â‚¬â„¢s deep prospect post on the red sox at #24. Ã‚Â The Kazmir trade featured the opposite phenomenon: Jacob Nottingham has drastically improved his stock this season compared to preseason rankings, edging onto the Astros BA prospect list by midseason at #9. Ã‚Â So, we have one deal for a falling upper-tier prospect, and another for a lower-tier guy on the rise.

The Indians sold Masterson while he still had at least some value. Ã‚Â He hadnÃ¢â‚¬â„¢t thrown particularly well in 2014, but his very solid 2013 season was still fresh in the CardinalsÃ¢â‚¬â„¢ memory when they acquired him. Ã‚Â HeÃ¢â‚¬â„¢s pretty much been bad ever since. Ã‚Â They paid for him with James Ramsey. Ã‚Â He was a middle-tier prospect, but heÃ¢â‚¬â„¢d always hit, and was in the midst of something that looked like a breakout season while repeating AA at the time. Ã‚Â His scouting reports werenÃ¢â‚¬â„¢t overly strong, but he looked like he could be a regular outfielder at the time Indians got him…and probably, at worst, the left-side of a platoon.

Maybe the market already knew Nolasco was on his way out? Ã‚Â ItÃ¢â‚¬â„¢s hard to understand why this deal netted so little. Ã‚Â Nolasco has always posted good peripherals, and didnÃ¢â‚¬â„¢t seem to be in a notable decline when he was dealt. Ã‚Â Therefore, IÃ¢â‚¬â„¢m a bit surprised at the return. Ã‚Â Sanchez was still a starter, but would soon spend the 2014 season bouncing through waivers until Pittsburgh finally picked him up (I think I saw him pitch a game in Altoona last year). Ã‚Â Ames and Wall were both bullpen arms. Ã‚Â None were prospects of any particular note, all ranking in the 20Ã¢â‚¬â„¢s among Dodgers prospects prior to the trade. Ã‚Â Nolasco actually pitched well for the Dodgers down the stretch in 2013, but has since imploded after signing with the Minnesota Twins that offseason.

It seems clear that the return for Johnny Cueto was pretty fair, given what the market has been paying for rental starters over the past several years. Ã‚Â If I had the choice, I would have preferred the return that the Brewers got for Greinke, based on what we knew at the time of the deal. Ã‚Â But given that Brandon Finnegan and Jean Segura were ranked at exactly the same spot in BAÃ¢â‚¬â„¢s prospect rankings, someone who was really sold on FinneganÃ¢â‚¬â„¢s stuff could probably argue otherwise. Ã‚Â Furthermore, Cueto brought with him some degree of injury risk that was less of a concern with Greinke. Ã‚Â And, frankly, there has been discussion among journalists (whether or not theyÃ¢â‚¬â„¢re correct) that the market for rental players is getting weaker every year. Ã‚Â Therefore, for the Reds to fall within a few breaths of the Greinke return seems reasonable. Ã‚Â IÃ¢â‚¬â„¢d expect that the Reds went with this deal because it was the best offer they received, based on their evaluations of the players.

The Cueto return does look better than every other trade deadline return for a rental starting pitcher from the past four years. Ã‚Â While itÃ¢â‚¬â„¢s not the most likely scenario, thereÃ¢â‚¬â„¢s a legitimate chance that each of the three starters the Reds acquired could be a valuable member of the RedsÃ¢â‚¬â„¢ rotation by 2017. Ã‚Â None of them is likely to ever be the kind of pitcher Cueto was, but this is a substantial infusion of talent at a position where the Reds have been looking pretty weak.

[You can read more of Justin’s posts at his blog: On Baseball & the Reds]