We hear a lot about streaky players. Announcers talk about players who are on a hot streak. Players discuss Ã¢â‚¬Å“getting out of a funkÃ¢â‚¬Â or if they are Ã¢â‚¬Å“swinging a cold batÃ¢â‚¬Â. We even call some hot streaks Ã¢â‚¬Å“patentedÃ¢â‚¬Â. The “streak” explanation has become almost completelyÃ‚Â ingrained in the way we think and talk about hitters.

ThereÃ¢â‚¬â„¢s just one problem: hot streaks are an illusion.

With almost thirty years of research on the subject, there is very little evidence to support a serial correlation (previous events influence future events)Ã‚Â for at-bats. This is not to imply that streaks don’t exist: The AÃ¢â‚¬â„¢s won 20 games back in the early 2000s and DimaggioÃ¢â‚¬â„¢s 56-game hitting streak are both examples of series of positives outcomes. But what we are interested in is whether this is somehow different than what we would expect given a players existing talent level.

To make this more concrete: if we flip a coin four times, we would expect 2 heads and 2 tails. Yet we also know there is a chance, although less likely, that we would get three heads and 1 tail. And even less likely still, thereÃ‚Â is a chanceÃ‚Â that we get 4 of the same type of outcome. Just because we getÃ‚Â 3 heads in a row doesn’t mean that there is a greater chance that we will get the 4th in our next flip. We would say that flipping a head once is “not serially correlated” with the next coin flip.

In the area of sports, Tversky and Gilovich (1989) discuss the Ã¢â‚¬Å“hot handÃ¢â‚¬Â theory (the idea that aÃ‚Â player is more likely to make a shot if they have just made a previous shot or shots) in basketball:

Ã¢â‚¬Å“First, the frequency of streaks (i.e., moderate or long runs of successive hits) must exceed what is expected by a chance process with a constant hit rate. Second, the probability of a hit should be greater following a hit than following a miss, yielding a positive serial correlation between the outcomes of successive shotsÃ¢â‚¬Â

The authors do not find evidence that previous hits or misses have an effect on future shots,Ã‚Â providing further evidence that Ã¢â‚¬Å“Ã¢â‚¬Â¦research indicat[es] that peopleÃ¢â‚¬â„¢ intuitive conceptions of randomness do not conform to the laws of chanceÃ¢â‚¬Â.

That’s a really important line because the authors are implyingÃ‚Â that, instead of seeing randomness in a series of outcomes, people try to craft stories to understand events. Instead of remembering all the times a hitter fouls off a high fastball, we say they are a good fastball hitter if they crank a home run on a high heater. This is what is known as positive confirmation bias: we tend to remember theÃ‚Â good moments as evidence of what we believe and discount evidence to the contrary.

The Tversky and Gilovich article is in the area of basketball which differs from baseball in several substantial ways (one being that baseball is enjoyable). Using a dataset of 501 baseball players who had 500+ at bats between 1987 and 1990, Albright (1993) finds no evidence of positive hitting streaks in professional baseball:

The data analysis performed here, on 501 plus-500-at-bat records over the four seasons from 1987 to 1990, has failed to find convincing evidence in support of wide-scale streakiness. In fact, the evidence is more in line with a model of randomness. It is certainly true that some players exhibit significant streakiness during a given season, but this would be expected under a model of randomness, just as one would expect a certain proportion of people flipping fair coins to produce streaky sequences of heads and tails.

This is a large body or research ranging from basketball (Shaw Dzewaltoski and McElroy, 1992), baseball (Vergin, 2000; Siwoff et al. 2000), to general psychology in sports (Adams, 1992). The large majority of studies have come to the same conclusion: hot streaks are an illusion.

No player has been more maligned with the Ã¢â‚¬Å“streakyÃ¢â‚¬Â label than Jay Bruce. The argument goes like this:

Jay Bruce will carry hisÃ‚Â team for a month, maybe a little more, but all the other times he is a normal or below-average hitter. If only Jay could Ã¢â‚¬Å“figure it outÃ¢â‚¬Â he would be a great player.

Here are about 5 years worth of wRC+ data (note: injuries were excluded for obvious reasons) for the following players: Zack Cozart, Joey Votto, Jay Bruce, Todd Frazier, Devin Mesoraco and Brandon Phillips. These are the wRC+ histograms for each player, (in 10 wRC+ increments). 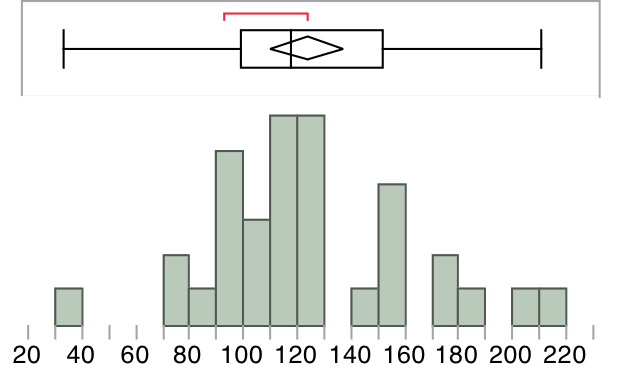 (I have to admit, thisÃ‚Â pictureÃ‚Â was the inspiration for this article.) 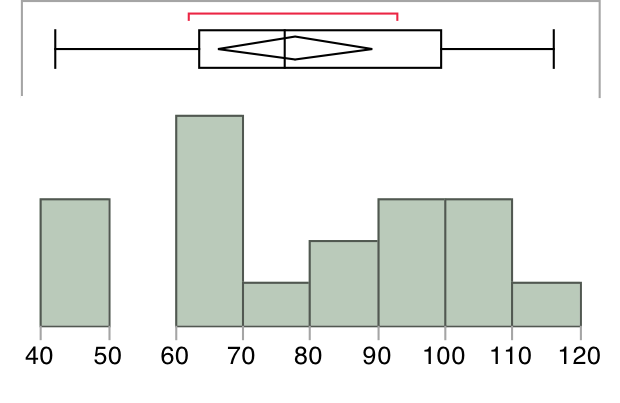 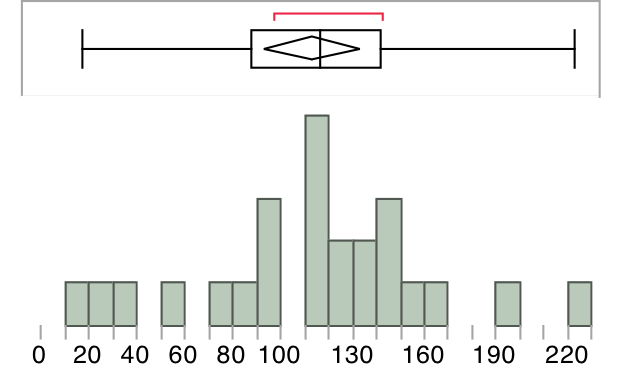 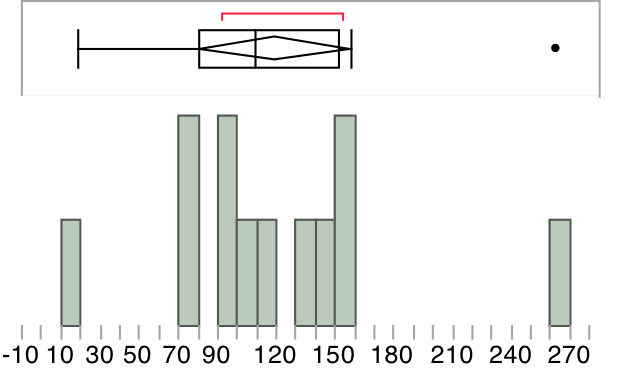 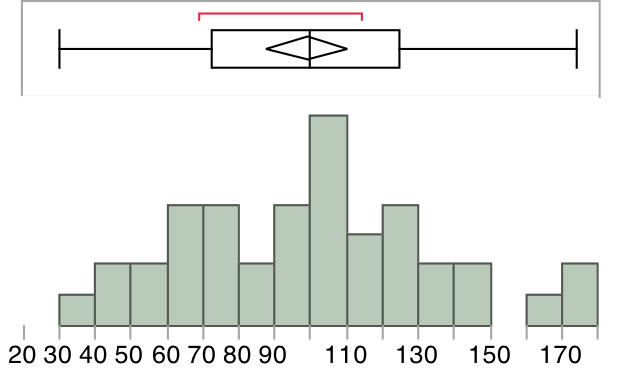 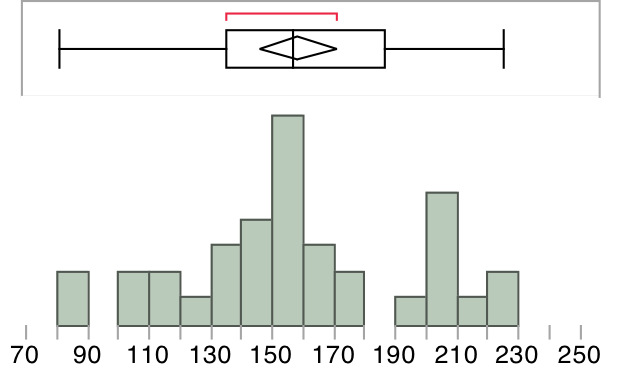 These graphs suggest that hittersÃ¢â‚¬â„¢ productivity is fairly normally distributed around a central talent level, which is consistent with previous research on the subject. Readers of the Nation know that there is a relationship between hard hit balls and battersÃ¢â‚¬â„¢ batting average on balls in play (BABIP). Yet within BABIP, there is also a healthy amount of variation. Put another way: sometimes a high popup falls in for a hit, sometimes a screaming line drive finds a glove. Many times itÃ¢â‚¬â„¢s out of a hitterÃ¢â‚¬â„¢s control.

Players will also go through periods where they face better and worse teams; they play in ballparks that are more or less hitter friendly; sometimes they are sick, or injured, and play poorly; sometimes they are feeling great and play well. In the end, however, the distribution of hitting outcomes conforms rather well to what we would expect given their level of skill.

From the dataÃ‚Â above, I calculated some measures of Ã¢â‚¬Å“central tendencyÃ¢â‚¬Â (or, how closely grouped together these values are). Each of these measures will provide different insights into how Ã¢â‚¬Å“streakyÃ¢â‚¬Â these players are: mean wRC+ will show a playerÃ¢â‚¬â„¢s average production; the standard deviation will show if players frequently diverge from their average production (or if they are likely to have very productive months and then very unproductive months); and the middle 50% will show where a player spends halfÃ‚Â of their career.

These are not full careers but fall between 2010-2015, none of which included rookie seasons because it would create unrelated variation in the data. I removed some months when players were injured or clear outliers Ã¢â‚¬â€œ such as when a player had three at bats and their wRC+ was in the 200s. Month-by-month groupings are imperfect because they do not possess the same number of games, but these generally fall between 21 games and 29 games per month. ItÃ¢â‚¬â„¢s not perfect; this is just a starting point.

It does seem that it is harder to maintain a higher level of play than it is a lower level (or, Joey Votto going 0-for-4 Ã‚Â has a much bigger effect on his wRC+ than Zack Cozart), so more skilledÃ‚Â players seem to have a bit larger variation around their average production level than less skilled players. Or stated with an economic rationale: more skilledÃ‚Â players have more room for variation because when they have a downward swing in their production, they donÃ¢â‚¬â„¢t fall out of the league.

Assuming these numbers have a gravity toward some central underlying skill level, the more plate appearances in each unit (in this case, months, ~60PA), the more likely theseÃ‚Â numbers will be to cluster around a central skill level. The work IÃ¢â‚¬â„¢ve done here is on a month-to-month basis, which may hide day-to-day variation (or week-to-week). Bill Petti (link) created the statistic Ã¢â‚¬Å“hitter volatilityÃ¢â‚¬Â to measure playersÃ¢â‚¬â„¢ variance from game-to-game in order to see if some hitters are more likely to follow a great performanceÃ‚Â with a poorÃ‚Â one.

Petti article argues that, in general, walking is a more stable method to create value than hitting for power. In the three years covered in thatÃ‚Â article (2011-2013), BruceÃ¢â‚¬â„¢s day-to-day variation is calculated to be 4% higher than league average, tied with Chris Young, David Murphy, B.J. Upton, Pablo Sandoval, and Stephen Drew. This Ã¢â‚¬Å“volatilityÃ¢â‚¬Â is largely driven by BruceÃ¢â‚¬â„¢s reliance on power to create runs. The most volatile hitters from 2011-2013 (Pujols, +11% more volatile; Alfonso Sororiano, +9%, Matt Weiters +9%, etc.) trade power for consistency. All but the few of the most talented players are able to avoid this tradeoff. Petti’s prime example of such a player? Joey Votto.

This is not to imply that changes in ability or talent will not cause deviations from a player’s previous performance. Recently, Joey Votto said that he changed his swing mechanicÃ‚Â during the All-Star break.Ã‚Â These mechanical changes may causeÃ‚Â hitters to perform better (or worse) than before, but this is because a change in approach, not some mythical “hot streak”. The same can be said about injuries — we only need to look at Jay Bruce’s performance last year to see thatÃ‚Â his decline was due to injury, not talent. With Jay now up to 119 wRC+ on the season, it appears that, once again, the long view is superior to the short view.

So while players will experience variation in their performance, attributing these changes to some mythical “streak” cheapens the discussion: instead of focusing on tactical or mechanical changes, fans are bombarded withÃ‚Â the “streak” explanation.Ã‚Â YetÃ‚Â if a player actually does bounceÃ‚Â between high and low levels of performance, is itÃ‚Â due to injury? changes in hisÃ‚Â swing? changes in ballpark? are pitchers approaching himÃ‚Â differently?

For a long time we’ve chalked up changes in performance to “streaks” instead of looking for the underlying reasons. Most of the time these changes areÃ‚Â just random variation, but if there is an underlying change, discussing these technical and/or tacticalÃ‚Â changes in a player’s plate approach would be a fruitful conversation.

As far as Jay Bruce is concerned, he’s not a streaky hitter. In fact, he’s surprisingly normal.