Cubs rookie Kyle Schwarber hit two home runs for the Cubs, as they beat the Reds 5-4 in 13 innings on Tuesday evening. Schwarber grew up in Middletown, Ohio, and grew up rooting for the same Reds he beat up on tonight.

The Reds got off to a quick start in the first inning. Brandon Phillips leadoff the bottom of the first inning with a single. Joey Votto then drilled a line drive right at the Cubs CF Dexter Fowler, who dropped the ball. Todd Frazier hit a sac fly, and the Reds took a 1-0 lead. The Reds added another run in the second inning on a Skip Schumaker RBI groundout.

Rasiel Iglesias had a solid bounce-back from his disastrous start right before the All-Star break. Iglesias allowed just two runs over 5.2 innings, while striking out eight Cubs batters.

The Cubs tied the game off Iglesias in the sixth inning. Chris Coughlin hit a ball to the top of the wall that was grabbed by a fan. It was originally called a triple. Bryan Price went out to challenge the call, because he thought it wasn’t a home run. The umpires then after a lengthy review decided it was actually a home run, and the game was tied at two. It was ruled an “umpires review” and not a challenge by Price.

The Reds got back-to-back singles in the 7th inning, and after Joey Votto stole second base, Todd Frazier channeled his inner Vladimr Guerrero by hitting a pitch that nearly hit the dirt for a 2-RBI single, giving the Reds a 4-2 lead. 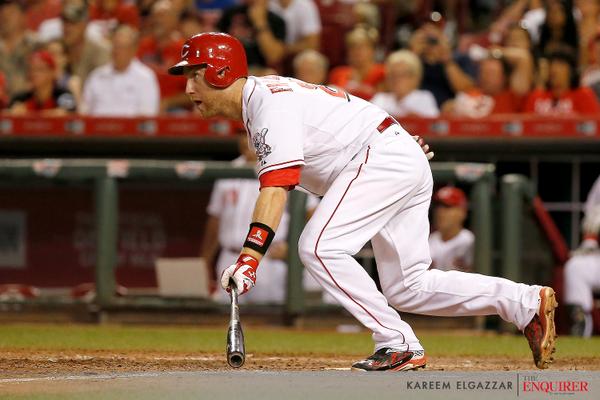 The game went into extra innings. Both teams bullpens held their opponent scoreless until the 13th inning. That’s when Middletown native Kyle Schwarber hit his second home run of the night, giving the Cubs a 5-4 lead. The Reds went down in order in the bottom of the 13th.Ã‚Â The Reds are now 3-8 against the Cubs this season. Long gone are the days of beating up on the Cubs.

Kyle Schwarber doing this to the Reds is the most Reds thing ever.

According to FangraphsÃ‚Â WPA statisticÃ‚Â (winning percentage added), the most important play of the game wasÃ‚Â Kyle Schwarber’s solo home run off Nate Adcock in the top of the 13th inning, giving the Cubs a 5-4 lead.Ã‚Â That home run decreased the Reds chances of winning by 40.0% (from 55.2% to 15.2%).

Iglesias pitched pretty well. Iglesias allowed two runs in 5.2 innings, but the second run was off a pretty cheap home run. Iglesias couldn’t recover from that, and was pulled after walking two batters. Iglesias certainly showed a lot promise tonight. That is important since Iglesias figures to be a major part of the Reds rotation for the next several seasons.

Joey VottoÃ‚Â has been smoking pitches lately. Votto drilled a pitch in the first inning that was hit so hard that Dexter Fowler dropped it. Votto then drilled another pitcher off the wall in the third inning, but was held to a single. Votto added another single in 7th inning, after he fouled off several pitches against LHP Travis Wood (left-handed batters have a .617 OPS against Travis Wood this season).

Jumbo DiazÃ‚Â looked good in relief. Diaz got out of Iglesias jam in the sixth inning, and then also got through the seventh inning without allowing a run. Diaz struck out 1, allowed 1 hit, and didn’t walk a batter.

J.J. HooverÃ‚Â had been really good of late, and really all season (allowed just 1 run in his previous 23 appearances, 3 in his last 37). He was not good tonight though. Hoover allowed a game tying 2-run bomb to Cubs rookie Kyle Schwarber in the bottom of the 9th. It was an absolute bomb too on a pitch right down the middle of the plate. Hoover was filling in for Chapman because he pitched three innings over the last two days.

The Reds are supposedly in a self-proclaimed “youth movement,” as described by manager Bryan Price. Tonight, Price started 37 year old Marlon Byrd in CF, and 35 year old Skip Schumaker in LF. Neither of whom will be playing for the Reds next season. Good times.

BothÃ‚Â Joey VottoÃ‚Â andÃ‚Â Todd FrazierÃ‚Â were both picked off first base tonight. So, that’s not a good thing.

I’m all for the Reds having a full on bonfire-style fire sale. I wrote that the Reds should Blow It Up, and I’m also that guy that many of you think is nuts for saying The Reds should trade Todd Frazier. There is one player that I don’t understand why the Reds are looking to trade, based on the Reds saying they believe they can compete in 2016/2017 by not trading Todd Frazier.

The Reds and Cubs will play two tomorrow. Mike LeakeÃ‚Â will likely be making his final start at Great American Ballpark in a Reds uniform in the first game. The second game will feature Tony Cingrani making his first start of the season.

All photographs used are courtesy of the CincinnatiÃ‚Â EnquirerÃ‚Â and Kareem Elgazzar, and are used by permission. All statistics areÃ‚Â usedÃ‚Â courtesyÃ‚Â of Fangraphs, ESPN Stats and Info, and Baseball-Reference (including Baseball-Reference Play Index).