2014 was Todd FrazierÃ¢â‚¬â„¢s best year as a full-time major league baseball player. The New Jersey native produced the shiny counting stats of 29 home runs and 20 stolen bases. In addition, he played above-average defense, discounted a bit by being drafted to the other side of the infield to cover for Joey Votto’s absence.

Yet FrazierÃ¢â‚¬â„¢s season could have been even better than it was. For the first three months of last season, his hitting fundamentals were markedly improved, creating a sense of optimism about his prospects. In the first couple months of 2014, his strikeout rate fell and walk-rate rose. His line drive rate jumped and his plate disciplined – as measured by the number of pitches he swung at outside the strike zone – tightened by more than 10 percent.Ã‚Â When the 2014 All-Star break arrived, Frazier was hitting .290/.353 with an isolated power of .210.

But Frazier couldnÃ¢â‚¬â„¢t sustain his breakout. He cratered for seven weeks after the break.While FrazierÃ¢â‚¬â„¢s 2014 ended up an improvement over 2013, he finished with totals equal to or less than 2012, his first full season. Most of his fundamentals had fallen back to between his levels of 2012 and 2013.Ã‚Â The extreme volatility of FrazierÃ¢â‚¬â„¢s 2014 season made projecting his 2015 difficult.

From Super Todd to Free Fall

2015 looks like it might be a replay of 2014. Frazier quickly answered the skeptics by blasting a 3-run homer on Opening Day and continuing to pound the ball through mid-June. He hit two home runs in Detroit on June 16 and backed that up with two more against the Tigers the next night in Cincinnati. He hit three more the next ten days.Ã‚Â On June 28, when Frazier hit home run number 25, he was on pace to hit 55, which is almost double his career-best. Those were the days, my friend.

ItÃ¢â‚¬â„¢s only 15 days, but Todd FrazierÃ¢â‚¬â„¢s batting approach is in free fall.

And Frazier’s swing-rate at pitches outside the strike zone is also the highest of his big league career.

One more bit of data. FrazierÃ¢â‚¬â„¢s career walk-rate is 7.6 percent, which is league average. When Frazier was locked in this year, he was walking at over a 10 percent rate. In June, his walk-rate fell to 2.4 percent. In July, he has yet to walk once. Counting his pinch hitting appearance yesterday, Frazier has gone 89 plate appearances without drawing a non-intentional walk. Think of how difficult it is to walk when you swing at two-thirds of your pitches.

HereÃ¢â‚¬â„¢s a graph of his monthly wRC+ (Reminder: wRC+ counts hits, walks, adds in power, adjusts for ballpark and era. wRC+ of 100 is league average.) 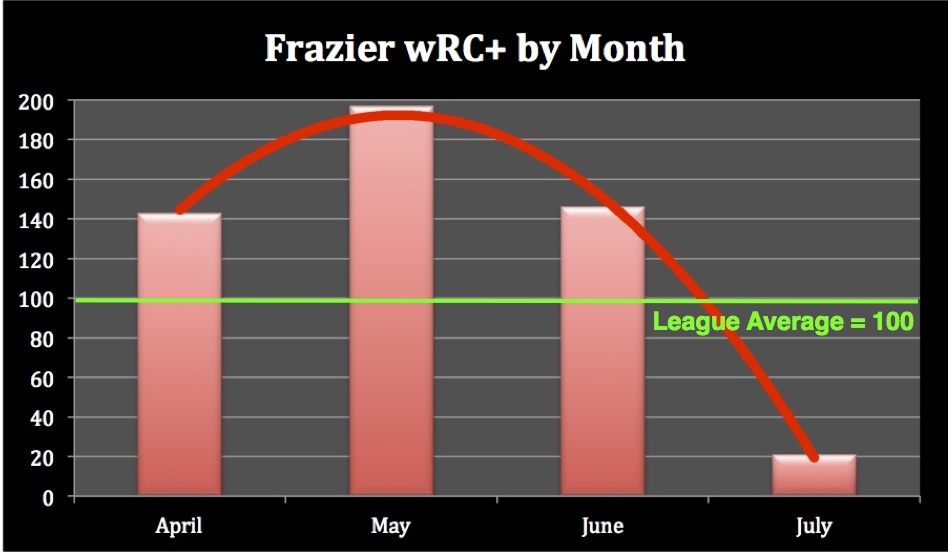 Look, I’m a card-carrying member of the Super Todd Fan Club and a ticket stub-toting celebrator of the Home Run Derby. It should go without saying that Frazier can reverse this slump just as quickly as he began it. The point was to demonstrate the ups-and-downs.

Todd Frazier is playing in his fourth season with the Reds. He is under team control through 2017. This offseason, he and the Reds agreed to set his salary for 2015 ($4.5 million) and 2016 ($7.5 million). Without an additional deal, Frazier and the club will enter the arbitration process for his final season. He can file for free agency for 2018. Frazier will take the field on Opening Day of 2018 at the age of 32.Ã‚Â Ã¢â‚¬â€œ the age, as noted before in the context of Brandon Phillips Ã¢â‚¬â€œ when players often begin a rapid rate of decline.

There has been talk of the Reds negotiating an extension with Frazier. You have to believe that the club tried to accomplish that last winter. In previous years, they have been able to reach agreement with Jay Bruce, Johnny Ceuto and Devin Mesoraco on guaranteed salaries through those players’ arbitration period, plus buying out one or two years of their free agency.

Todd Frazier wouldnÃ¢â‚¬â„¢t agree to do that because of his age. Johnny Cueto will be 30 when he signs his next contract. Devin Mesoraco will be 31. Jay Bruce will be 30 or 31. Each of those players will be young enough that they can, assuming good health, expect a lucrative, long-term contract. If Frazier were to sign an extension with the Reds for two years of his free agency, he would be 34 years old for his subsequent contract, well past the prime age for landing a large multi-year deal in the post-PED era.

In an ideal world, the Reds would negotiate with Frazier for his age 32-34 seasons.Ã‚Â But Frazier wonÃ¢â‚¬â„¢t agree to that. HeÃ¢â‚¬â„¢ll be able to sign a longer-term deal with another club that lasts through his age 36 or 37 season.

For the team who signs Frazier to his next contract, the slugger’s agency will be far from free. If you study recent comparable players like Kyle Seager and Pablo Sandoval, a five-year, $100-million plus contract for Frazier seems reasonable. But ponying up for that multi-year deal is just as bad of an idea as it was nine months ago.

If youÃ¢â‚¬â„¢re relying on Frazier to provide his team a hometown discount, I wouldnÃ¢â‚¬â„¢t get your hopes up. Last weekend, a Reds employee told me of a conversation he had with one of FrazierÃ¢â‚¬â„¢s family members who bragged that the third baseman was going to Ã¢â‚¬Å“bankruptÃ¢â‚¬Â the Reds for an extension. And that was before the Home Run Derby. Obvious caveat: That was a relative, not Frazier or his agent talking. But it’s a good reminder that professional athletes generally look out for themselves and family first, as they should.

We’re more than two years away from the end of FrazierÃ¢â‚¬â„¢s time with the Reds, assuming he isn’t traded. There is no imperative to sign him to an extension now, especially given the volatility of his hitting and because his 2016 salary is already set.

If the Reds rush into an expensive, long-term deal with Todd Frazier, it will be a mistake. One born of the owner’s love for (some of) his own players and delirium from Frazier’s fast start and Home Run Derby performance. A new agreement for the fan-favorite third baseman would be a PR bonanza. It would paper over the sadness caused by the departure of other popular players like Johnny Ceuto, Mike Leake and maybe Jay Bruce and Aroldis Chapman. But public relations is a terrible, awful reason to do it.

The Reds should keep Todd Frazier and other players who can contribute to competing in 2016 and 2017. But then they need to let him go, or trade him at the 2017 deadline. Five more years of Frazier might ease the pain a bit right now, but it would ultimately be a harmful narcotic and the wrong prescription for the Reds.