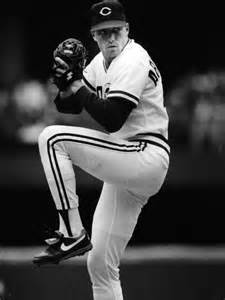 At this time in 1990 the Reds’ Jack Armstrong was on top of the world. He had just been named the starting pitcher for the National League in the All Star game, which is pretty much the ultimate honor for a pitcher. The team was in first place on its way to a wire-to-wire World Series victory over the juggernaut Oakland Athletics. Armstrong was 11-3 with a 2.28 ERA at the All Star break. The Reds were 13-4 in games started by Armstrong. The 25 year old was seemingly on his way to superstardom in his first full season in the rotation.

The Reds’ young ace was one of 5 Reds to make the All Star team that season. Chris Sabo was the starting third baseman and went 0 for 2 at the plate. Barry Larkin wasÃ‚Â inserted as a pinch runner for Tony Gwynn and stole second base but he didn’t get to bat. Nasty Boy Rob Dibble pitched one inning and allowed the two baserunners he inherited from future Red Jeff Brantley to score the only runs of the game. Nasty Boy Randy Myers pitched an inning, allowing a hit and two walks but no runs.

There were several other former or future Reds players in the game as well. Jeff Brantley, Kevin Mitchell, John Franco, Benito Santiago and Frank Viola were on the National League squad. Playing for the American League, Ken Griffey Junior made his first All Star team as a Mariner and Dave Parker made his last All Star team in his only season as a Milwaukee Brewer. 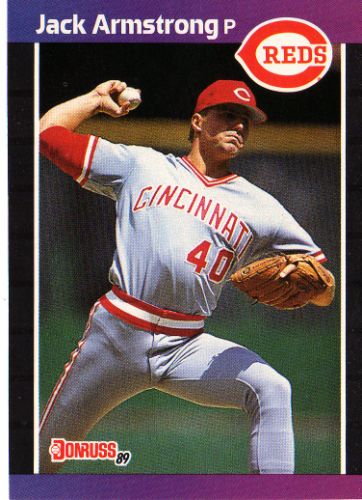 The game was played at Chicago’s Wrigley Field on a soggyÃ‚Â day. The game was stopped several times, including one hour-long rain delay but they still played all nine innings in just under three hours. The wet weather probably helped contribute to the low-scoring affair, which the AL wonÃ‚Â byÃ‚Â a 2-0 score. 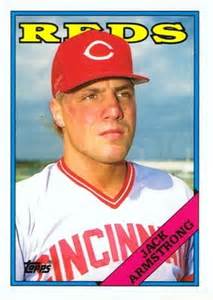 Jack Armstrong faced a daunting task. He was going up against a Murderers Row of sorts, starting with the greatest leadoff hitter of all time — Rickey Henderson, who flied out to right field. Henderson would go on to win the AL MVP Award that year and was the first of three Oakland Athletics Armstrong would face in his two innings. The Reds, of course, would go on to defeat the A’s in the World Series that same season. Wade Boggs of the Red Sox was the next batter, and he hit an infield single to third baseman Chris Sabo of the Reds.

The next batter was another Athletic, Jose Canseco, who ended up with 37 home runs that year. Would you bat Jose Canseco third in a lineup full of Hall of Famers? I wouldn’t. But the manager of the American League team that year was ourÃ‚Â belovedÃ‚Â Tony LaRussa, manager of the A’s. Leave it up to LaRussa to favor his own players in the All Star game and do something stupid like bat Canseco in the coveted three slot instead of a Hall of Famer. It wouldn’t be the last time LaRussa would degrade the Midsummer Classic with his shenanigans; remember him leaving Johnny Cueto off the 2012 All Star team in revenge for the fight his Cardinals started against the Reds? You know, the one where 20 of his players ganged up on Cueto in the scrum. But back to the story; Armstrong was able to strike out Canseco to bring another HOFer to the plate in the person of Baltimore’s Cal Ripken, who grounded out to his shortstop counterpart Ozzie Smith to end the first inning. 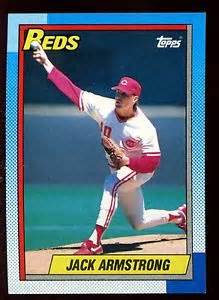 In the second inning Ken Griffey Junior led off and flew out to left field in foul territory. Griffey and Armstrong were both drafted in the 1st round of the 1987 draft. Griffey was taken with the 1st overall pick by the Mariners, then Armstrong was taken by the Reds with the 18th pick, four slots ahead of future Hall of Famer Craig Biggio and nine slots ahead of future Red Pete Harnisch.

The next batter was Mark McGwire, yet another Athletic. McGwire would hit 39 home runs that season but he struck out against Armstrong. Next up was catcher Sandy Alomar of the Indians, who would be the AL Rookie of the Year that season. Alomar fouled out to first baseman Will Clark to end both the inning and Armstrong’s excellent outing. Jack gave up only one hit, the infield single to Boggs in his two innings of work. That moment would mark the highest peak of Armstrong’s baseball career, but the glory did not last long. Not long at all. 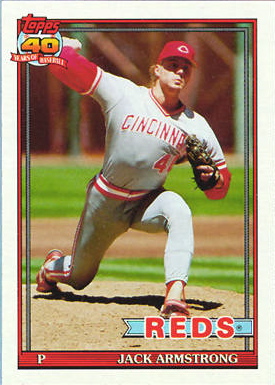 After his great half-season of dominance and his brief moment of glory in the All Star Game, it all came crashing down in a hurry for Armstrong. In his first start after the All Star game he allowed 5 runs in 3.1 innings to the New York Mets, which is more runs than he had given up in any start before the break. The next several games were more of the same, including a 7-run shellacking from the Padres. Over the course of his first nine starts after the All Star break Armstrong posted one win, six losses and a dismal 6.36 ERA. He was thenÃ‚Â swiftlyÃ‚Â demoted to the bullpen for the rest of the season. So on July 10th he wasÃ‚Â starting the All Star game as the best pitcher in the National League, and six weeks later he was banished to the pen. That is aÃ‚Â stunningÃ‚Â fall from grace.

In the post-season he was relegated to pitching as the long man out of the bullpen during the Reds’ championshipÃ‚Â run. He was not used in either the divisional series or the NL championship series. But he did come up big one more time.Ã‚Â Armstrong helped the Reds win the World SeriesÃ‚Â over the Athletics when he came into game two in relief of Scott ScudderÃ‚Â and pitched three scoreless framesÃ‚Â in a contestÃ‚Â the Reds eventually won in the 10th inning. But his biggest contribution to the championship was helping them build up the big divisional lead during the first half of the season. The Reds actually had a losing record after the All Star break in 1990, but regrouped in the playoffs and won the title. 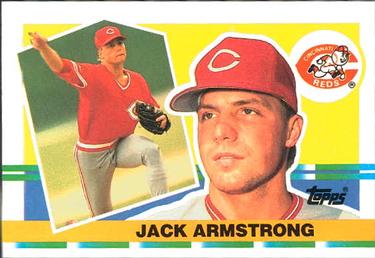 He was the best pitcher in the league in the first half, then one of the worst in the second half. He started outÃ‚Â nearly unhittable but quickly morphed into a punching bag. You can see that he was a bit lucky in terms of batting average on balls in play in the 1st half (league average BABIP was .295) and a little unlucky in the 2nd half, but neither half was extremely lucky or unlucky. The biggest difference was his walk rate, which doubled after the break. His 2.43 BB/9 in the first half was good but not great, but his 4.93 BB/9 in the second half was dreadful. You can’t survive in the major leagues when you walk as many batters as you strike out. Except for that brilliant three month period in 1990, control was a major problem for Armstrong throughout his seven year career.

Unfortunately those 2nd half numbers were the real Jack Armstrong. The Reds put him back in the rotation for the 1991 season, but he turned in the worst season of his career, going 7-13 with a 5.48 ERA in 140 innings. After the 1991 season the Reds traded Armstrong and Scudder to the Cleveland Indians for Greg Swindell, who would go on to pitch brilliantly for the Reds in 1992 (12-8, 2.70 ERA). 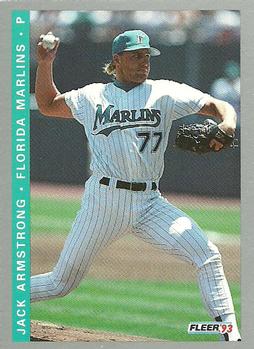 After going 6-15 with a 4.64 ERA for the Indians in 1992, Armstrong was left exposed to the expansion draft, where he was taken by the Marlins. He then went 9-17 with a 4.49 ERA as a memberÃ‚Â of the inaugural Florida Marlins team that lost 98 games in their first year in the league. He then pitched 10 innings for the Rangers in 1994 and that was it. His career was over.

In terms of talent Armstrong was a fringe major leaguer, but he managed to put together one remarkable stretch of elite success in that wonderful 1990 wire-to-wire season. It is safe to say that the Reds would not have won the championship that season without Jack Armstrong. He had a careerÃ‚Â unlike any other. He shot straight to the top of the baseball world, then plummeted straight back down to Earth and right out of the game altogether. It didn’t last long but he reached heights few players ever reach and he earned himself a memorable place in Cincinnati Reds history.