This year, Ã¢â‚¬Å“the crack of the batÃ¢â‚¬Â holdsÃ‚Â new meaning for baseball fans. Instead of talking about the sound a hitter makes when they drive a long fly ball, fans are increasingly turning to Ã¢â‚¬Å“exit velocityÃ¢â‚¬Â speed in order to determine how well a batter made contact. Yet what does this metricÃ‚Â tell us? And if it is important, how are the Reds performing in Ã¢â‚¬Å“exit velocityÃ¢â‚¬Â?

Major League Baseball has installed equipment in every stadium that records amazing amounts of information. Teams can now track exactly how quickly Billy Hamilton reacts to a batted ball; they know how many rotations per minute Johnny CuetoÃ¢â‚¬â„¢s curveball has; and now they know exactly the angle and speed of a batted ball as itÃ‚Â enter the field of play. This new system is called StatCast and much of itsÃ‚Â information will become public later this year.

Tracking batted ball velocity is not just a playground for nerds. This New York Times article provides a small peek behind the curtain of front office activities and how teams are incorporating exit velocityÃ‚Â data into their personnel decisions. This article indicates a few analytically savvy teams, including the St Louis Cardinals and the Houston Astros, have been using this data for years when makingÃ‚Â roster decisions.

Other data suggests that batted ball velocity may help indicate if a player isÃ‚Â injured or a candidate for a regression year. It is still unknown to the public when batted ball velocity stabilizes (spring training? mid-July? It is all new information), but the existing leaderboards suggest a relationship between power and exit speed velocity. The hope is that this new information will allowÃ‚Â fans refine existing metrics, such as HR/FB rate, which we had previously assumed stays roughly constant over a player’s career. Using data on how well a player is making contact may help us understand the relationship between type of ball in play (fly ball, ground ball, line drive), player strength or conditioning, and contact quality (in terms of exit velocity).

This has important implications for pitchers as well. Early data analysis finds a relationship between pitchers who have a low exit velocity and those who have a below league-average BABIP. This intuitively makes sense because a low exit velocity would suggest that hitters are having difficulty identifying pitches and making solid contact. It is too early to know for sure, but exit velocity may provide an important improvementÃ‚Â in the way weÃ‚Â think about both hitters and pitchers.

This brings us to the league data. If you enjoy baseball data analysis, Baseball-Savant will quickly consume hours of your free time (consider yourself warned). Using ESPNÃ¢â‚¬â„¢s Gamecast, Baseball-Savant has started tracking the exit velocity of many batted balls in 2015. The database is incomplete, but it is still interesting to see the current data. Here is the average batted ball velocity of all hitters with at least 50 plate appearances in 2015: 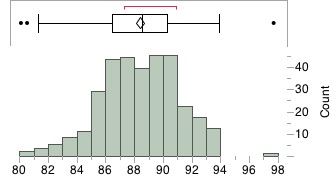 The dot allÃ‚Â the way to the right is Giancarlo Stanton. Honestly, this whole post could have been about him. Ã‚Â “Exit velocity” is aÃ‚Â statistic that reveals what aÃ‚Â terror he is with a bat in his hands: Stanton’s AVERAGE exit velocity is 7.33 miles per hour faster than the number 2 player on this list, Nelson Cruz. Keep in mind the standard deviation is 2.71 MPH, which makes Stanton’s average battedÃ‚Â ball 2.70 standard devisions away from the NUMBER TWO hitter in all ofÃ‚Â baseball. Oh, and it just gets better from there: Stanton’s averageÃ‚Â ground ball (91.64 mph) is hit hard enough to clear the fences; hisÃ‚Â averageÃ‚Â fly ball travels at 101.94 MPH, which is over three miles per hour faster than the number two player in this category, Justin Smoke.Ã‚Â

All I’m saying is this: If it’s your night to “Win the Toyota Tundra” at Great American Ballpark and Stanton is atÃ‚Â the plate, you won’tÃ‚Â want that truck afterÃ‚Â he hits it.

And here are the Reds average batted ball speeds:

Not surprisingly, the ToddFather is hitting the ball hard. His slash line (average MPH/Flyball/Groundball) of 91.26/95.06/86.44 leads the Reds in all categories. Closely behind Todd is Jay Bruce and Joey Votto. From the ole eyeball test, that seems about right.

We find more interesting numbers as we go down the list. Consider Marlon Byrd.Ã‚Â While Byrd has crackedÃ‚Â 14 home runs in the first half, his exit speed is only 85.66 mph, more than standard deviation below the league average. Brandon Phillips, who only has 5 home runs this year, has a higher exit velocity (86.79) than Byrd. The difference appears to beÃ‚Â that Byrd mashesÃ‚Â fly balls and line drives (92.02mph) while weakly hittingÃ‚Â groundballs (80.2). As we receive more data players, it will be interesting to see if this is aÃ‚Â result of Byrd getting behind in the count and therefore using defensive swings or if these weak ground balls are evenly dispersed across counts.

Here is aÃ‚Â graph of exit velocity against batted ball distanceÃ‚Â (all MLB hitters with 50 ABsÃ‚Â through July 9). The graph returns a reasonable correlationÃ‚Â (R^2 = 0.44). 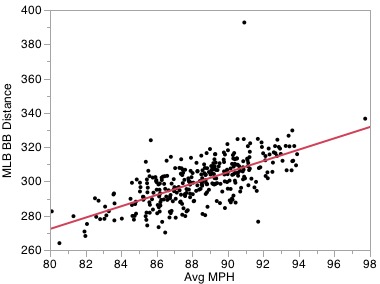 That being said, letÃ¢â‚¬â„¢s keep two things in mind:

First, letÃ¢â‚¬â„¢s not make too much out of a simple correlation;Ã‚Â and second, it is too early to know exactly how important this relationship is in determining hitter quality.

What is encouraging is that the Reds have three hitters (Votto, Bruce, and Frazier) who have exit velocities above the major league average. If the Reds are able to bring in another player with high exit velocity, that would mean that half our starting position players are hitting the ball harder than league average. It is unclear how important this is to overall success, but I think we can agree that itÃ¢â‚¬â„¢s probably better to hit the ball harder than the other team.