Joey Votto climbed up another rung on the ladder of the greatest home run hitters in baseball history last night. He is now well within the top 400 and is tied with a Hall of Famer, an active player and a guy I have never heard of until today. The Hall of Famer was former Yankee’s great Tony Lazzeri. The active player is Justin Upton. The unknown (to me) player was Harlond Clift of the St. Louis Browns. You can learn more about those players below.

Votto’s blast on Tuesday night was his 15th of the season and 178th of his career. The victim was Max Scherzer, who has been the best pitcher in baseball so far this season. It was the first time that Votto has ever taken Scherzer deep, which is not surprising considering this is Scherzer’s first season in the National League after winning the AL Cy Young Award in 2013. Votto had faced Scherzer in only one prior game and went 1 for 3. It was Votto’s 12th career home run against the Nationals. The ball flew only 358 feet to right field, but that was more than enough in Nationals Park, which is not an easy place to hit home runs. It was Joey’s shortest home run of the season. The ball speed off the bat was 97.1 mph and 80 feet off the ground was the highest it reached. For comparison’s sake, Votto’s fastest ball speed off the bat on a home run this year was 110.2 mph on a 425 foot home run that got only 64 feet off the ground at Miller Park. That was Votto’s fastest, longest and lowest homer of the season. Talk about a screaming line drive! The highest height one of his homers has reached this year was 124 feet in the air. You can watch last night’sÃ‚Â home run off Scherzer HERE:

Since myÃ‚Â last update a month ago Joey had hit only one home run . It came onÃ‚Â June 13th against Kyle Hendricks of the CubsÃ‚Â and put him all alone in 388th place with 177 home runs It was the first time he had homered off the Cubs right-hander. That ball traveled 383 feet over the left field wall at Wrigley Field in Chicago. You can watch the home run HERE.

I enjoy seeing how the best players of today compare to the great players of years gone by. So I will keep you updated on Votto’s progress up the home run ladder. Who knows what sort of interesting stories and facts we will uncover as the Reds’ best all-aroundÃ‚Â hitter of our generation climbs the charts? Adam Dunn hit a lot more home runs and had a very good on-base percentage to go with his stellar slugging, but I think we can all agree that Joey Votto is the most complete hitter the Reds have had since the Big Red Machine days, Barry Larkin and Eric Davis notwithstanding. To learn more about Votto’sÃ‚Â previous home runs and the players he passed refer to my last update of the Joey Votto Home Run Tracker.

In that update I wrote about two active players whom Votto had passed this season but have since passed him back. Justin Upton moved brieflyÃ‚Â ahead of Votto but Joey caught him again last night. Giancarlo Stanton also moved ahead of Votto and is sitting on 181 career homers, but Stanton is now out for six weeks with a broken bone in his wrist. That should give Votto enough time to catch back up to Stanton and open up a bit of a lead before the 25 year old super slugger can return and blow past the 31 year old Votto permanently.

At the time of the last update, Votto was only one homer behind Brandon Phillips. That is still the case. DatDudeBP has hit a couple longballs since then and remains one rung above Votto on the ladder. Brandon better get busy if he wants to stay ahead of Joey. 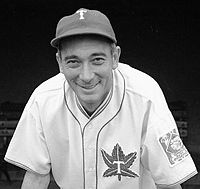 Tony Lazzeri — He was the second baseman for the famous Murderers’ Row Yankee teams of the 1920’s and 30’s. He played alongside Babe Ruth and Lou Gehrig and was part of the 1927 Yankees squad that is often compared to the 1976 Reds as the greatest teams in baseball history. Lazzeri played for the Yankees from 1926 to 1937, then played his last three seasons with the Cubs, Dodgers and Giants. The most home runs he ever hit in a single season was 18, but he did that four times. He placed in the top 15 of the MVP voting five times, peaking at #3 in 1928. He only made one All Star team, mostly because his best seasons came early in his career before the first All Star game was held in 1933. Lazzeri was the first player ever to hit two grand slams in one game, which he did late in his career in 1936. He is also one of only 14 players ever to hit for the “natural cycle”, which means to hit for the cycle in order: single, then double, then triple, then home run. He is the only player to complete a natural cycle with a grand slam. Lazzeri was expelled from school when he was 15, then he worked as a boilermaker and become a semi-pro boxer before being signed to play minor league baseball in 1922. In 1925 he played for the Salt Lake City Bees of the Pacific Coast League and hit .355 with 60 home runs and 222 RBI, which is the most RBI in professional baseball history. Not bad for a guy who weighed 170 pounds. After that season he was offered to the Cubs and Reds (!), but both teams passed due to Lazzeri’s epilepsy, then the Yankees snapped him up.

In 1927, Lazzeri finished 3rd in the AL in home runs behind his teammates Ruth and Gehrig. He set an AL record for RBI in a game with 11 in 1936, the same year he hit the second grand slam in World Series history. He still holds the major league record for RBI in consecutive games with 15. He set major league records by hitting 6 home runs over three consecutive games (broken in 2002 by Shawn Green) and seven homers in four consecutive games (broken by Ralph Kiner in 1947). After his major league career ended in 1939 he played several more seasons in the minor leagues. He died young, at the age of 42 from a fall that was caused by either a heart attack or an epileptic seizure. Lazzeri was elected to the Hall of Fame by the veterans committee in 1991. 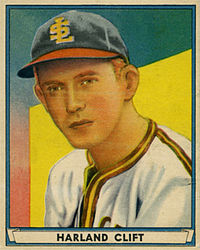 Harlond Clift — A third baseman for the Browns from 1934 to 1943, then played a couple years with the Senators in the war years. Clift maxed out at 34 home runs and 118 RBI in 1938. He finished 18th in the MVP balloting that year, which seems criminal but when you consider that his team was absolutely awful it makes more sense. The Browns went 55-97 that year. He scored a whopping 145 runs in 1936. In those days third basemen were highly valued for their fielding, much like shortstops are today. It was rare to see a third baseman who was also an excellent hitter. Clift could certainly hit but he was also a great fielder, setting major league records for double plays and assists in 1937 that held up for 35 years. His career was cut short by a bad case of the mumps and a horse-riding injury. Clift only made one All Star team.Ã‚Â From 1936 to 1938 he was one of the most elite players in the majors, but some poor seasons late in his career put a big dent inÃ‚Â his career averages. He ended up with a good-but-not-great career OPS+ of 116. He walked a lot more than he struck out during his career, but that was not all that uncommon back in those days of wacky pitching mechanics and 80 mph fastballs. In his rookie year of 1934 he actually led the league with 100 strikeouts. Coincidentally, Tony Lazzeri (above) led the league in strikeouts his rookie year as well, with 96 in 1926. Lazzeri also walked slightly more than he struck out in his career.

With his 15 home runs this season, Joey Votto has climbed from 435th place to 385th place on the all-time list. He has passed 55 players, including 4Ã‚Â Hall of Famers and 5Ã‚Â former Reds:

NOTE: active players are listed where they were when Votto passed them, not where they are now.

Previous articles in this series: