In the last few steps before one of the entrances of Great American Ball Park, the five logos, engraved in slabs, spread out in a star shape– one for each All Star Game played in Cincinnati.Ã‚Â  They were added last month. They will stay. In an era of up-to-the-second updates from across baseball flashing from each visible corner of the stadium, and as-it-happens pitch velocity lighting up each smartphone in the park, they are quiet, they are unchangeable, and they are perfect for honoring the presence of the Midsummer Classic.

I watched the installation. It was a surprise. I arrived for work one morning at the Reds Hall of Fame and Museum to find 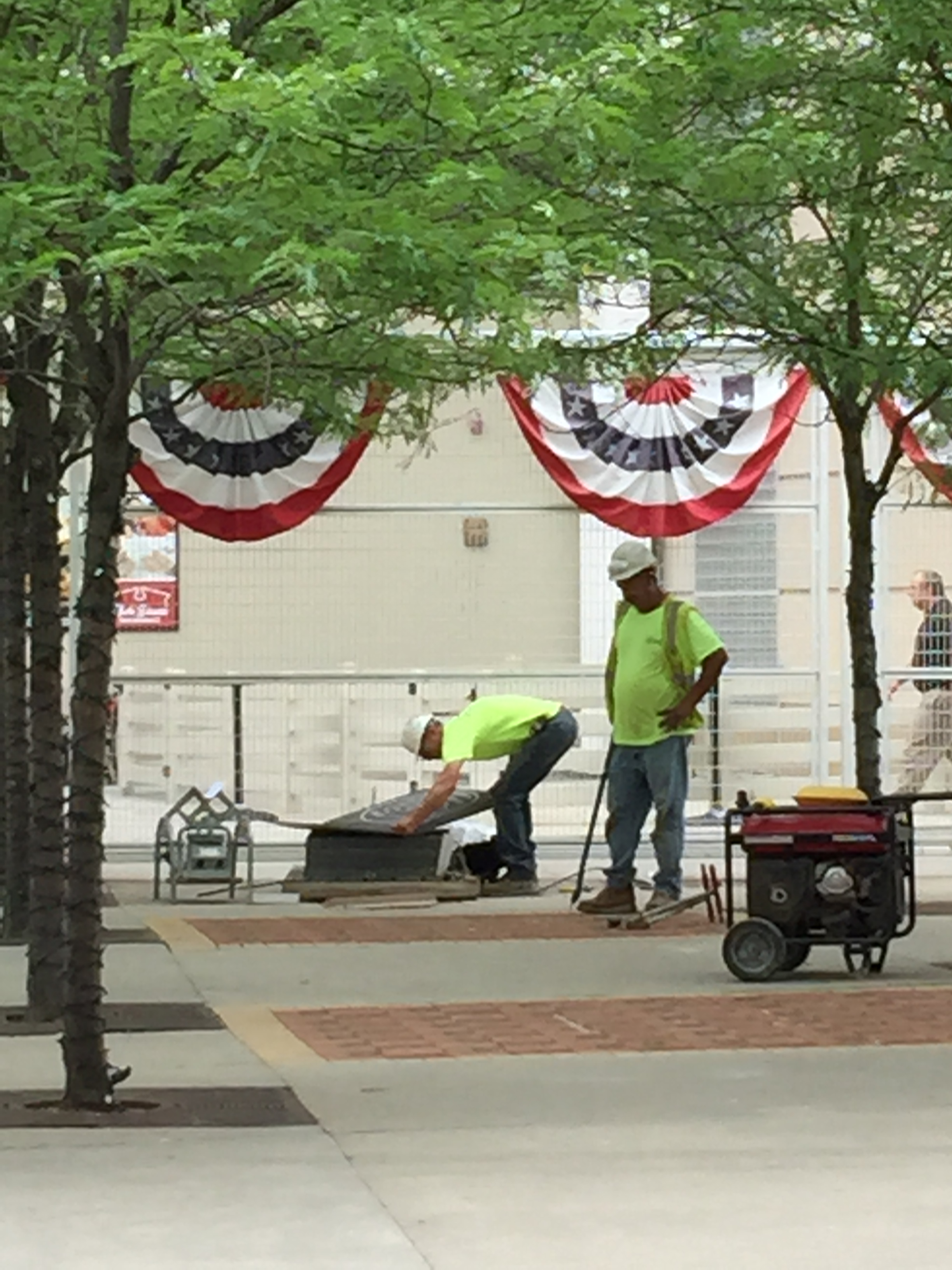 a construction crew tilting the 1938 logo this way and that, marking its fellows’ permanent locations with chalk that was soon washed away in a summer storm. I took the second-graders in my charge for the day and stood them as near as I could.

“Someday,” I said, “you can bring your grandchildren here and tell them you watched these bricks going into place. I was about your age the last time the All Star Game was in Cincinnati. You’ll probably be my age by the time it comes around again.” They paused solemnly, then asked if it was time for lunch yet.

That’s all right. The All Star Game is nothing but a mark of time. When it was here in 1953, African Americans weren’t permitted in Coney Island. In 1970,Ã‚Â  the field of green carpet in brand-new Riverfront Stadium was considered state of the art. On July 3, the Reds unveiled a sparkling new scoreboard, which which is quite literally a window into the world as it updates instantaneously with stats from around the nation and fan photos taken moments earlier. And by the time the next time the All Star Game arrives, it will be as hilariously quaint to us as the bulky square JumboTron we once celebrated at Riverfront.

The just-issued bobblehead commemorating the 1988 Game (of course there’s a commemorative bobblehead; let that serve as a time marker in and of itself) features Mr. Redlegs surrounded by a Rubik’s Cube and huge portable stereo. A 2045 version might outfit him with a pair of flip flops, an iPhone and an “I’M OFFENDED” tee shirt, and we’ll point and say, “Oh man, all those hipster mustaches. And we had to drive everywhere. Ourselves.”

Last week, Marty Brennaman wrung an entire inning’s of entertainment out of reading, verbatim, the Byzantine rules of the updated Home Run Derby while Jeff Brantley laughed very hard in the background. It was very 2015: Marty was present, the physics of Great American Ball Park were in play, and the fact that the homer distances will be arbitrated by MLB’s Statcast was much discussed. A game now measured to its infinite degrees by computer will now return to the site of one of its most iconic All Star moments– one player using body and brute force to smash into another to decide a run.

What’s significant about the 2015 version is that it will stand alone. It is not, as the 1988 Game was, part of a larger Bicentennial celebration, or coinciding, as the 1970 version did, with the debut of a just-opened concrete doughnut which in less than 30 years would fall out of fashion. And it is perhaps a backhanded blessing that the Reds are struggling this year; it forces us to find solace in and focus on the unfolding of a baseball game. The standings are put to the side.Ã‚Â  The game itself is the centerpiece.

Look up from your Twitter feed, which will be long gone when all of baseball next converges in our front yard. Just watch.

This time will not come again.