The #VoteFrazier campaign was a success. Todd Frazier was selected by the fans as the NL starting 3B for the National League. Frazier, who trailed Matt Carpenter in every single voting update, ended up beating out Carpenter by over 2 million votes.

It will be very cool to see Frazier get to start at 3B in his hometown. In a bad year for the Reds, this is a somewhat nice consolation. John Fay of the Cincinnati Enquirer had more on Frazier being selected:

Todd Frazier, down by 2 1/2 million votes two weeks ago, was voted onto the National League All-Star team as a starting third baseman.

“I was nervous,” Frazier said. “I was excited. It was a huge comeback. Definitely have a bunch of people to thank. Lisa Braun and Jamie Ramsey. All the fans out there took the time and effort.

The All-Star Game is in Cincinnati on July 14. That made it a bit sweeter for Frazier.

“When you’re little playing in the backyard with your brothers Ã¢â‚¬â€ I have two older brothers I thought they’d by the ones Ã¢â‚¬â€ they taught me the ropes and helped me along the way,” Frazier said. “Now, I’m the one. This is my second All-Star Game. It’s going to be a great time.

Frazier made no secret that he thought he deserved to be elected. He’s hitting .289 with 25 home runs and 54 RBI.

“I always have confidence in my abilities Ã¢â‚¬â€ even when I’m doing bad,” he said. “I feel like that next swing is going to be the one to drive in a run or get a guy over. I’ve always had confidence.

“I give props to my dad. He always said act like you’ve been there before, do what you’ve done in the past.”

Reds manager Bryan Price has made it clear he thought Frazier deserved to be the starting third baseman.

“It’s a lot of good things coming together,” Price said. “The fans, the community made a strong push for Todd. There’s no doubt he would have been selected it if he wasn’t a starter.

“That being said, I’m a big believer anyone who deserves to start should be on the team. I think he’s the best third baseman in the National League. I think he deserving to start the game.

“I feel really good about the push.”

In last week’s final voting update, Frazier had closed to within just 62,980 votes of the Cardinals’ Matt Carpenter for the starting spot at third base in the 2015 All-Star Game. He ended up defeating Carpenter by nearly 2.1 million votes.

Joey Votto finished second in the 1B voting, and Brandon Phillips finished third in the 2B voting. Injured Reds Zack Cozart and Devin Mesoraco both finished 4th at SS and C. Bruce, Hamilton, and Byrd all finished in the top-10 in the OF vote. It was pretty amazing what the fans of a 36-44 team were able accomplish.

The pitchers and reserves will be announced tomorrow at 7:00pm on ESPN. Johnny Cueto and Aroldis Chapman will likely be selected. Joey Votto and Brandon Phillips could both also get selected, but it might be tough with Brandon Belt and Joe Panik both having good seasons at 1B and 2B for the Giants (Bruce Bochy is the NL manager). 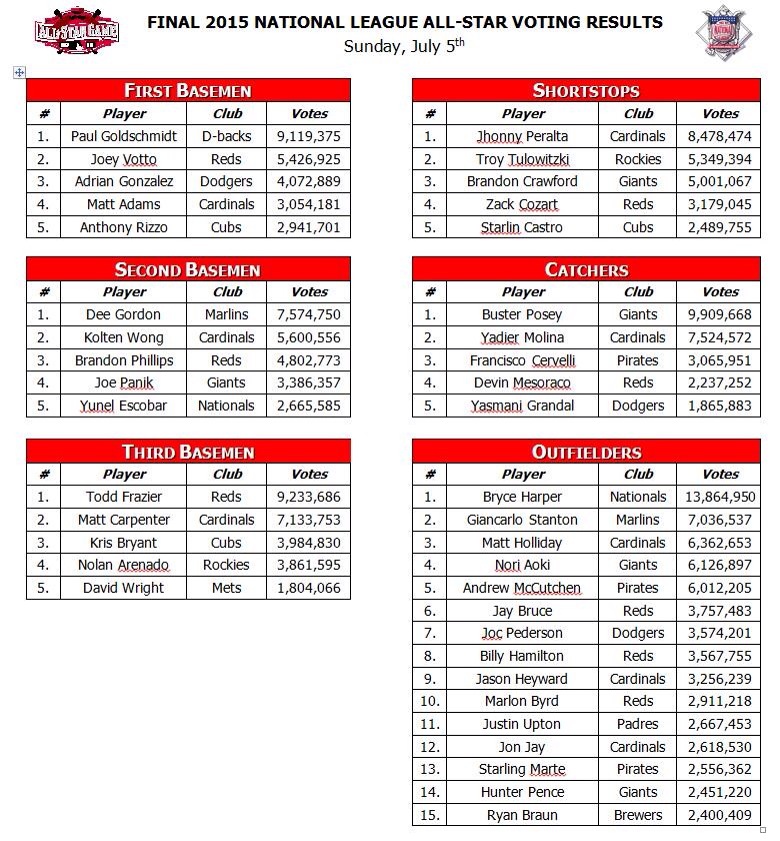 Pinch me now thanks 2everyone who voted for me 2 start my 1st all star game. Thank u teammates coaches family and most importantly my fans