The column I wanted to write this Friday was going to be simple: Aroldis Chapman is amazing. Yes, we write a lot about the Cuban Missile here at Redleg Nation; I won’t claims it’s original, just entertaining.

HereÃ¢â‚¬â„¢s how the column was going to read: it is fairly well established that winning one-run games is not a repeatable skill from year-to-year. For example, in 2012, Baltimore went 29-9 in games decided by 1 run. It was an incredible year that landed the OÃ¢â‚¬â„¢s in the playoffs and made some believe they could consistently challenge the Yankees and Red Sox in the AL East. The following year the OÃ¢â‚¬â„¢s went 20-31 in one run games and finished tied for third in their division at 85-77.

Yet Aroldis Chapman makes people think crazy things. I was sure that the numbers would support me in saying that Chapman has allowed the Reds to consistently win more 1-run games than other teams since 2010. IsnÃ¢â‚¬â„¢t that what Ã¢â‚¬Å“eliteÃ¢â‚¬Â closers do? IsnÃ¢â‚¬â„¢t that why we keep him in the bullpen until the game is on the line?

The only problem: that story is entirely false.

When Aroldis Chapman was installed as the full-time closer in 2010, we knew the Reds had a weapon. The 104 MPH fireball thrower was going to lock down the closest games for the Reds. The problem is that, since 2010, the Reds have had a losing record in 1 run games. 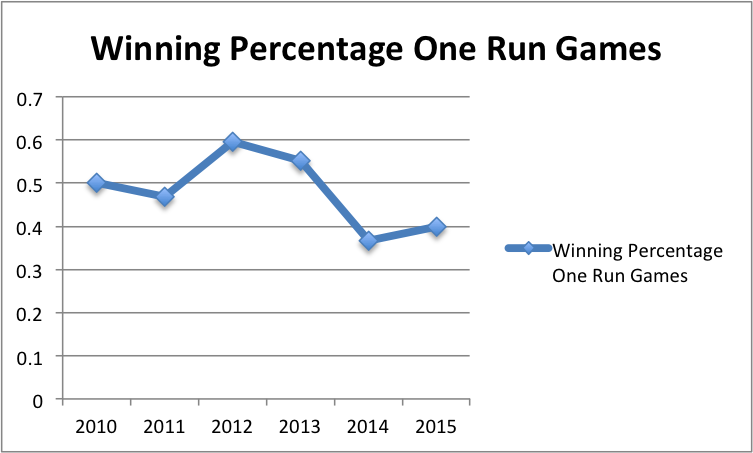 Now linking the Reds record in 1-run games to Aroldis Chapman is a little big of slight of hand. For example, better teams will win more 1-run games than worse teams because better teams win more of every type of game than bad teams. That is, by definition, what makes them better.

There are also lots of ways to lose 1-run games: for example, the Reds could lose 1-0 and never have a lead in the game (such as last yearÃ¢â‚¬â„¢s season opener to St. Louis). Teams normally win (or lose) in extra innings by 1 run. Since the Reds have not been a consistently good team since 2010, combined with games in which Chapman never pitches, it is easy to understand why the Cuban Missile would not move the needle on these closely fought contests.

Yet this is precisely the problem: this past week Chapman was brought in to Ã¢â‚¬Å“closeÃ¢â‚¬Â a game when the Reds were ahead by 4 runs. By the percentages, the Reds had over a 98% chance of winning that game. Despite this, we used our best pitcher to close the door on a contest that, in all truthfulness, was already over. Also this week: the Reds played 13 innings one day and did not elect to have Chapman throw a single inning. Why? Because of the Ã¢â‚¬Å“closer rulesÃ¢â‚¬Â.

The closer rules, however, are inning-blind: these rules only consider Ã¢â‚¬Å“save situationsÃ¢â‚¬Â as important and ignore how to create a Ã¢â‚¬Å“save situationÃ¢â‚¬Â. Have a tie game with the other teamÃ¢â‚¬â„¢s heart of the order coming up? CanÃ¢â‚¬â„¢t go with the closer, not a save situation. We saw this against the Pirates only eight days ago. Bases loaded, tie game in the sixth? Way too early to be using your best bullpen arm, what if there is an important matchup in the 9th?

This is much akin to only batting Joey Votto as a pinch hitter when the Reds have a lead.