Two baseball ideas have been bugging me since last October. Both of them are relatively simple, but their combination is pretty interesting. HereÃ¢â‚¬â„¢s what I have been thinking about:

In 1-run games, a lot of factors can tip the outcome. Perhaps a hitter guesses correctly and blasts a home run to open up a lead. An error might be the difference. Perhaps the home plate umpire misses a strike call that extends an at bat. In short, compared to games decided by more than one run, random variation plays a larger role in the outcome of one run games.

There is some data to support this: Bill James findsÃ‚Â that, overall, better teams outperform worse teams in 1-run games, but there is plenty of variation in the data. Furthermore, this article (Fangraphs) finds there is some association between hitterÃ¢â‚¬â„¢s ISO, bullpen quality and winning in 1-run games. This, although not terribly surprising, is only coarsely able to parse better teams from worse.

From this, it seems like the research leads us to believe that random variation plays a large role in deciding who wins 1-run games.

Second: readers of Redleg Nation know that the run environment has changed radically over the past ten years. This is due to many factors: faster fastballs, a smaller strike zone, changing field conditions, better scouting technology, PED testing, and other reasons.

With the falling run environment, however, does this mean that more games are decided by 1-run? Most likely yes, but how many more games are being decided by this margin? In order to figure this out, I went over to baseball reference and calculated the percentage of 1-run games since 2005. Here are the results: 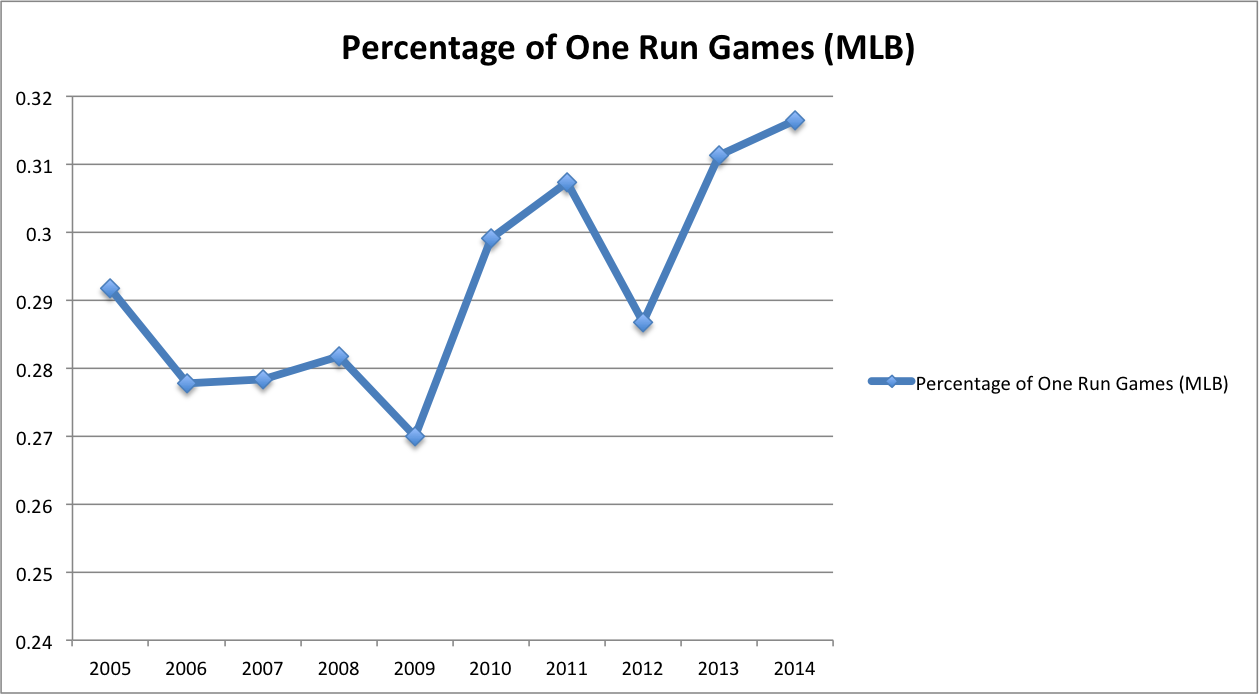 There are several implications to this that are implied, but not directly supported by these data. The first is that it is more difficult for highly skilled teams to pull away from the pack than less skilled teams. This could partially explain why almost every team in the AL is still vying for a playoff spot.

These results would also imply that creating winning streaks is more difficult than in the past because teams are less able to control the outcomes of games (I plan on looking into this next). If that turns out to be the case then it will be harder for teams to climb up their division than in previous years. Put another way: being Ã¢â‚¬Å“xÃ¢â‚¬Â games back in the playoff race might be harder to overcome in 2015 than in previous seasons because the distance those Ã¢â‚¬Å“xÃ¢â‚¬Â games represent is greater than before.

I don’t want to oversell this: it is hard to quantify how influential this trend actually is. On the surface, it appears that about 3% more games wereÃ‚Â decided by 1-run last year than from 2005-2009. That loosely translates into about 5 games a year, which although is not nothing, this isn’t a game-breaking development.

There are other reasons why teams may be more closely clustered together in the standings than before: Perhaps there is just a more-level playing field across front offices since most of them are investing (via legal means, or otherwise) in analytics departments. It could also be that with more money in baseball, better scouting technology, and greater health and nutritional information, teams are finding it harder to create a competitive advantage. It could be all that.

Over the next few weeks several teams will have to make decisions about their playoff chances given their relative standing in the playoff race. While the randomness associated with a suppressed run environment may superficially make it appear like teams are still in the race, it might actually be that some teams are further back than the standings reflect.

Should this be the case, fewer teams will be selling at the deadlineÃ‚Â due to the impressionÃ‚Â they have a chance at making a run at a playoff spot. A tight trade market will drive up the cost of available players and make it more lucrative for teams that have assets to move.

So, know anyone who might be shopping say, a closer or a starting pitcher? Due to the changing run environment in baseball, this might be a great time to start making phone calls.