Tonight’s game was delayed for two hours because of rain. However, not a drop of rain fell on the field during the two hour delay. That pretty much sums up the 2015 Cincinnati Reds season.

The Twins wasted no time after the rain delay. The second batter of the game, Torii Hunter, hit a bomb into the left-field seats. The Twins would score another run in the second, on some shaky defense from the Reds. Eugenio Suarez hit a solo home run in the third inning, to cut the deficit to 2-1.

The Reds battled back, scoring four runs in the bottom of the 7th inning, and they cut the deficit to 7-5. They couldn’t however get any closer than that, and fell 8-5. The Reds are now 35-41 on the season,.

I very much prefer someone like Suarez hitting well and struggling in the field early on as opposed to the other way around.

Anthony DeSclafaniÃ‚Â pitched around trouble for the most part of the night. It wasn’t his best start, as he allowed a career high 11 hits, but he kept the Reds in the game. He only walked 2 batters, and struck out 7. I’m not exactly sure why Price had him pitch in the 7th inning, and go over 120 pitches. That made his overall line look way worse than it would have it we would exited after six innings with a quality start.

Rasiel IglesiasÃ‚Â looked good in his rehab debut with the Louisville Bats. FOX 19 had some video of Iglesias from tonight. Jim Day reported that the Reds plan to put Iglesias back into the rotation when he returns.

He gave up one hit, walked one, and struck out three. #LouBats #Reds 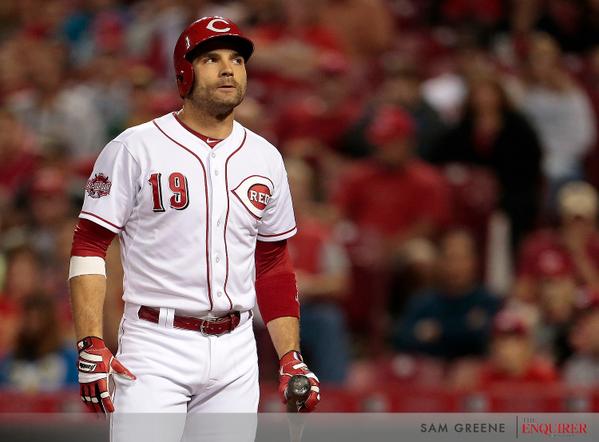 Joey VottoÃ‚Â had a rough game in the field. Apparently though, he is a “defensive liability” at first-base according to some in Reds country. Don’t listen to that lie. Votto is 2nd in the MLB this year among all 1B in Defensive Runs Saved (7), 4th in UZR/150, and 5th in Fangraphs Defensive Ranking. Votto has 39 Defensive Runs Saved over his career. He is not a liability.

Bryan PriceÃ‚Â decided that it was a good idea to let his rookie pitcher, Anthony DeSclafani throw 122 pitches. That coming on a night where the game was delayed for two hours. That is just not smart.

I understand the criticism of letting Disclafani throw 122 pitches. I get it.

But this is a pennant race.

Whoa. Just saw Disco left with 122 pitches. Many, many of those were high-stress, since he pitched from the stretch in every inning.

Burke BadenhopÃ‚Â continued his struggles. Badenhop came into the 7th inning with runners on 1st & 2nd, and allowed back to back singles. Badenhop now has a 5.59 ERA on the season, but does have a 3.79 FIP. Maybe better days are ahead for Badenhop.

Brandon PhillipsÃ‚Â was not in the starting lineup again tonight. Phillips was tweeting minutes before the first pitch tonight, which is against the MLB rules. I don’t know if the “no cell phones 30 minutes before the game” rule would be enforced during a rain delay, but it probably was not a smart decision. C. Trent Rosecran posted a picture of the official rules on cell phone use.

The Reds luck this season with weather has been pretty brutal. On a positive note, the rain delay fit in perfectly around the USAÃ‚Â Women’s Soccer team, who played in the World Cup Semifinals at 7, which promptly ended with a USA win right before the first pitch. The USA women will play on Sunday for the World Cup. Go USA!

While we wait on this storm, we're cheering on #USWNT! pic.twitter.com/a9JIf6bBg0

It doesn’t matterÃ‚Â one bit towards the outcome of this season for the Reds, but why is Votto being pushed back to 3rd in the lineup, Frazier 4th, and Bruce 5th? Give these guys the most trips to the plate batting 2nd, 3rd, and 4th. That is even more important when you are playing with a really bad rest of the lineup.

Pirates:Ã‚Â believe it or not, the Bucs are still playing. They are tied with the Tigers 4-4 in the 14th inning. Gerrit Cole allowed 2 runs in 6.2 innings, and Andrew McCutchen is 2 for 4 with 3 walks.

Cardinals:Ã‚Â they actually lost. Chris Sale dominated the Cardinals tonight, allowing just 1 run in 8.0 innings, while striking out 12. The Cardinals however got great pitching of their own, as Lance Lynn allowed just 1 run in 6.0 innings. The game was tied 1-1 after 9 innings, and the White Sox ended up winning 2-1 on a home run by Tyler Flowers off Cardinals reliever Miguel Socolovich in the 11th inning.