The Reds are not having a good season. The team has a lot of holes, many of them caused by injury. But the Reds do have some elite players. Joey Votto is a superstar. Todd Frazier is having an MVP type of season. Johnny Cueto has beenÃ‚Â a Cy Young caliber pitcher for several years now. The Reds have the best closer in baseball. Aroldis Chapman does more than light up the radar gun.

This is Chapman’s 4th year as the Reds’ closer. He took over the role from Sean Marshall in May of 2012. Including the one he snared in 2011, Chapman has accrued 128 career Saves. That places him 4th on the Reds’ all-time Saves list: 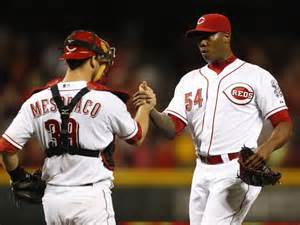 Chapman needs 54 more Saves to catch Danny Graves for the top spot in franchise history. If he stays healthy and doesn’t get traded, Chapman is likely to take over the crownÃ‚Â sometimeÃ‚Â next season. He will probablyÃ‚Â earn about 20 more Saves this year, leaving him 34 shy heading into 2016. He has put up 38, 38 and 36 over the last three years. So we are looking at a September timeframe for his ascendancy next year. Chapman could reach the number two position on the list by the end of this season.

The biggestÃ‚Â question is if the Reds will trade Chapman or keep him. Many writers and fans are clamoring for the Reds to trade the Missile for prospects or other long-term pieces. He will become a free agent after the 2016 season unless the Reds sign him to a contract extension before then. Some people believe there is no point in paying big dollars to a closer when the team is losing and there are not many games to save. That does make sense if the Reds can get an excellent young player in return, but that remains conjecture at this point. I hope the Reds keep him. He is just too dang fun to watch. He puts butts in the seats and is one of the Reds’ most marketable players. He is a young player without much mileage on his arm. I would prefer to see the Reds make him part of the foundation they build the next playoff team around.

The names ahead of Chapman on the list are very impressive. The names behind him are colorful. Let’s take a look at the top 10 closers in Reds history:

1. All of Danny Graves‘ 182 Saves came with the Reds. He was the Reds’ closer from 1998-2005, except for 2003. That was the year the Reds converted Graves to a starting pitcher, an experiment that failed miserably. The next year he set his career high with 41 Saves, then was released in the middle of the 2005 season. Graves was the opposite of the flamethrowing Chapman. Danny was a soft-tossing sinkerballer. He pitched during a very high scoring period in baseball’s history, leading to a career ERA of 4.05, although his best years came when scoring reached its peak in 1999 and 2000. His ERA gradually rose as run scoring declined around the league. Graves is the only player in MLB history to have been born in Vietnam. He is also the only player to ever have more than one season when all of his hits were home runs (in 2000 and 2001 he had one hit each season, both homers). He was a two-time All Star. His career in Cincinnati ended on a sour note when he was released after flipping the bird to booing fans.

2. Francisco Cordero saved games for four major league teams and finished his career with 329 Saves, which places him 15th on the MLB all-time list. 150 of those came with the Reds, 117 with the Rangers, 60 with the Brewers and 2 with the Blue Jays. He was the Reds’ closer for four years (2008-2011). His career high was 49 with the Rangers. He put up 40 Saves for the 2010 Reds team that broke their 15 year playoff drought. The 4 year, $46 million contract the Reds gave Cordero to come to Cincinnati in 2008 was the richest contract ever given to a relief pitcher up to that time. Coco made three All Star teams, once with the Reds in 2009.

3.Ã‚Â John Franco is 4th on the all-time MLB Saves list with 424, trailing only Mariano Rivera, Trevor Hoffman and Lee Smith. “Only” 148 of those Saves came during his time as the Reds closer from 1984 to 1989. The remaining 276 came with the Mets. Franco is a member of the Mets Hall of Fame. His career high was 39 Saves in 1988 with the Reds. That is a low number for a guy who would end up 4th on the career leaders’ list considering 40 and even 50 Saves in a season is not uncommon. A player has hit 40+ Saves in a single season 154 times.Ã‚Â Franco became the all-time Saves leader in 1998, but was passed by Trevor Hoffman in 2005. Franco made four All Star teams, three with the Reds. The Reds acquired Franco by trading Rafael Landestoy to the Dodgers in 1983. Following the 1989 season the Reds traded Franco to the Mets for future Nasty Boy Randy Myers.

5. Clay Carroll was the shut down reliever for the Big Red Machine. Teams didn’t really have closers back in those days. Carroll averaged about 100 innings per year and didn’t always finished the games he pitched in. In 1972 he netted 37 Saves, which wasÃ‚Â the National League recordÃ‚Â until Bruce Sutter broke it in 1984. Carroll made the All Star team in 1971 and 1972. He finished 5th in the Cy Young balloting in 1972 and 8th in 1974. He finished with a 2.94 career ERA. He is a member of the Reds Hall of Fame.

6. Rob Dibble was the nastiest of the Nasty Boys. Known for his blazing fastball, he was a forerunner of the Cuban Missile. Dibble totaled 88 of his 89 career Saves with the Reds. Dibble’s career high for Saves was 31 in 1991. He tallied only 11 for the 1990 World Series champion team. He is one of only 41 pitchers to throw an Immaculate Inning, which is striking out the side on nine pitches. Dibble reached the 500 strikeout mark faster than any other pitcher in baseball history, needing only 368 innings. He was Ã‚Â the Reds’ first round draft pick in 1983. He made the All Star team in 1990 and 1991. Dibble was famed for his hot temper. He was involved in several on-field brawls and even had a fight with equally-hot tempered manager Lou Piniella in the Reds’ clubhouse in 1992. He once got mad and threw a ball from the pitcher’s mound into the centerfield seats at Riverfront, striking and injuring a woman.

6. Tom Hume played for the Reds from 1977 to 1987 and was the closer much of thatÃ‚Â time. He made the All Star team in 1982, a year in which the Reds were awful. His career high for Saves was 25 in 1980. He was the Reds’ bullpen coach for many years. Hume was not-so-affectionately known as Tommy “Boom Boom” Hume for his predilection for giving up home runs. Does anybody else think he looks a bit like Mike Leake?

6. Jeff Brantley put up 172 career Saves, 88 of them for the Reds, including a league-leadingÃ‚Â 44 in 1996. He made the 1990 All Star team with the Giants. After the 1997 season the Reds traded Brantley to the Cardinals for Dmitri Young. Brantley was a quarterback in high school and led his team to the Alabama state title. He played on a Mississippi State college baseball team that featured three other future major league stars: Will Clark, Rafael Palmeiro and Bobby Thigpen. Now the broadcasting partner of Marty Brennaman for the Reds on Radio.

9. Pedro Borbon pitched for the Reds from 1970 to 1979, spanning the entire Big Red Machine era. He was known as a workhorse who routinely pitched 120+ innings and 60-80 games per year. 18 was the most Saves he recorded in a single year. Borbon was another hothead who was involved in several fights during his career. Borbon’s son Pedro Jr. pitched in the majors for nine years. He is a member of the Reds Hall of Fame.

10. Wayne Granger was another stalwart member of the Big Red Machine bullpen that helped earn Sparky Anderson the “Captain Hook” sobriquet. Granger led the league with 35 Saves for the 1970 World Series team, that was an NL record at the time. Granger allowed the first and only grand slam to a pitcher in the World Series when he gave one up to Dave McNally of the Orioles in 1970. The Reds acquired Granger in 1968 along with Bobby Tolan for Vada Pinson. Granger threw the last pitch and earned the last Win in Crosley Field. He is in the Reds Hall of Fame.

11. Jeff Shaw was a Red from 1996 to 1998. He led the league with 42 Saves as a Red in 1997, then racked up 48 the next year split between the Reds and Dodgers. Shaw was the only Reds player to make the 1998 All Star team, but was traded to the Dodgers for Paul Konerko and Dennys Reyes before the All Star game was played, leaving the Reds without a representative. He also made the All Star team in 2001, his last season in the bigs. Shaw totalled 203 career Saves, 129 with the Dodgers. Shaw is from Washington Court House and I played against him in high school.