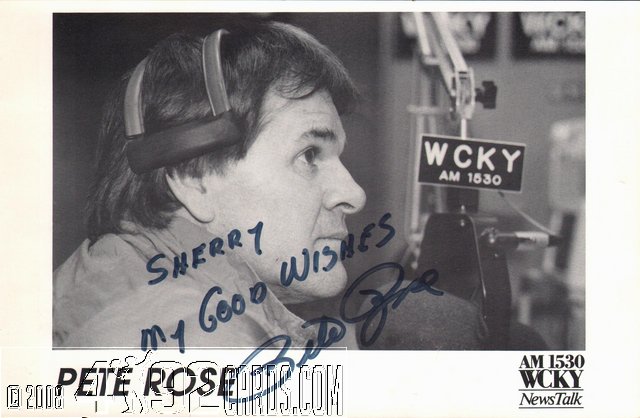 Although Pete Rose was banned from baseball, he wasnÃ¢â‚¬â„¢t banned from talking about it, and in 1990 he talked about it a lot on the radio.Ã‚Â  From the press release as reported by UPIÃ‚Â  Ã¢â‚¬Å“Cincinnati radio station WCKY announced Friday it has hired Rose as a baseball commentatorÃ¢â‚¬Â¦Beginning March 19 and continuing through the World Series, Rose will broadcast baseball commentaries on the station at 7:20 a.m. and 4:52 p.m. Rose also will talk about baseball for an hour each Thursday, between 6 p.m. and 7 p.m., on the station.Ã¢â‚¬Â

In 1990 I was an unabashed Pete Rose fan.Ã‚Â  I was probably the last person who continued to believe that Pete Rose was railroaded for a few minor indiscretions. Ã‚Â  As program director of WCKY Radio, I was excited when General Manager Tom Severino put together a deal to hire Pete to be our baseball commentator. Then I met him.

Coarse, vulgar, loud, rude.Ã‚Â  He brought Carol (second wife) to our client party, wearing a blouse that showed off two of CarolÃ¢â‚¬â„¢s better qualities.Ã‚Â  Pete winked at Tom and I and said something like Ã¢â‚¬Å“ThatÃ¢â‚¬â„¢ll get them buying commercials wonÃ¢â‚¬â„¢t it?Ã¢â‚¬Â

Pete was good on the air and seemed to like it.Ã‚Â  In Ã¢â‚¬Å“My Prison Without BarsÃ¢â‚¬Â, Pete talked about being on the radio – Ã¢â‚¬Å“Throughout the show,Ã‚Â  I tried my best to answer honestly and give the fans their moneyÃ¢â‚¬â„¢s worth.Ã‚Â  I got the strong impression the most of them were supportive and willing toÃ‚Â  forgive and forgetÃ¢â‚¬Â. (I think a lot of people in that time were like me, waiting for the moment when Pete would be declared innocent of all charges.) Ã‚Â  The radio show had a little momentum going for it that was killed as soon as the feds shipped him off to Marion, Illinois. (Did you know who grew up in Marion? Ã‚Â I didn’t!) Ã‚Â He came back for a little bit after he did the time, but it didnÃ¢â‚¬â„¢t have the same vibe and Pete moved to Boca Raton soon after his sentence was complete.

TodayÃ¢â‚¬â„¢s news makes it appear that PeteÃ¢â‚¬â„¢s dreams of being reinstated are being shatteredÃ¢â‚¬Â¦ again. Ã‚Â I always had the thought that Pete and Bart Giamatti has cut some sort of Ã¢â‚¬Å“under the tableÃ¢â‚¬Â deal that gave the Commissioner the chance to lookÃ‚Â  Ã¢â‚¬Å“tough on crimeÃ¢â‚¬Â but would eventually allow him to reinstate Pete on some partial basis. Pete would become part of the broadcast team for the Reds, maybe not everyday, but he would end up as an “ambassador” for baseball and Cincinnati. Ã‚Â And a member of the HOF. Ã‚Â  Ã‚Â But then Bart died, suddenly and unexpectedly.Ã‚Â  And when the players change so does the game.

Pete holds seventeen major league records, a few National League ones and his name and effort can never be erased from the two World Championships won by the Big Red Machine. Ã‚Â  He is also the only living player on Major League Baseball’s Ã¢â‚¬Å“Permanently IneligibleÃ¢â‚¬Â list.Ã‚Â  And it appears MLB has no plans to grab the eraser.