Murray Cook was hired by the Reds as their GM in October 1987, and served as the GM during the 1988 and tumultuous 1989 season. Several of his trades landed key contributors to the 1990 World Champions. Born in Canada in 1940, he began his baseball career as an infielder in the Pirates farm system in 1962. He became a scout for the Pirates in 1965 and worked his way up the baseball hierarchy. He was named the Yankees GM in June 1983 and took over as GM of the Expos in 1984. After his stint with the Reds he scouted for the Twins, Red Sox, and Tigers, where he has been the east coast regional cross checker since 2007. He is also a member of the Canadian Baseball Hall of Fame, where he will undoubtedly be joined one day by Joey Votto. I interviewed him over the phone and via email over the last couple of weeks.Ã‚Â

When did you become aware the Reds were considering you for GM? Who approached you? What was the interview process like?

I was approached by Bob Martin (Marge SchottÃ¢â‚¬â„¢s attorney). Al Rosen had recommended me, and I flew to Cincinnati to meet Mrs. Schott. We met but it was primarily a meeting for her to assess if we were a good fit.Ã‚Â  I negotiated a contract with Martin and was announced as the new GM in October 1987.

When you accepted the job, how did you go about assessing the Reds team and organization? Did you have any discussions with Bill Bergesch after you took over?

It is ironic that Bergesch had hired me in New York and we did talk briefly after I took over. I received valuable input from the holdovers in the front office, particularly Chief Bender (note: Bender had supervised the Reds farm system since 1967). Most of the input on the major league team came from Pete. My philosophy as a GM was that it was my job to give the manager players he was going to play.

You made your first major trade less than a month after being hired Ã¢â‚¬â€œ the Kurt Stillwell/Ted Power for Danny Jackson deal. Discuss the choice to trade Stillwell over Larkin, and how the Royals and Jackson became the trade partners.Ã‚Â

1983 draft, and a year younger than Larkin). Jimmy Stewart and Ray Shore had scouted starting pitchers and they were high on Danny Jackson (note: Jackson posted a 9-18 record in 1987 due to terrible run support, his ERA was better than the league average). You never had enough pitching. One issue was that Power and Stillwell were MargeÃ¢â‚¬â„¢s two favorite players Ã¢â‚¬â€œ she told me Ã¢â‚¬Å“it had better work.Ã¢â‚¬Â (Note: Jackson went 23-8 in 1988 and finished second in the Cy Young balloting).

In December, you traded Dave Parker for Jose Rijo and Tim Birtsas. Discuss the thinking behind that trade, which moved a very popular player for a player that had struggled in the majors.

I liked Parker and had been with him when I was in the Pittsburgh organization, but it was clear by 1987 he was more of a DH type. We also had younger options in the outfield and needed pitching. I was very familiar with Jose Rijo, having been in New York when he was signed. His development was badly damaged by George Steinbrenner, who insisted on promoting him to the majors when he wasnÃ¢â‚¬â„¢t ready as a response to the big splash that Dwight Gooden made in New York when he debuted in 1984.

At the winter meetings, I saw one of the Oakland writers. He told me that I Ã¢â‚¬Å“had gotten two good arms for Parker –

unfortunately, both of them belonged to RijoÃ¢â‚¬Â. Tim Birtsas turned out to be a serviceable reliever for the Reds for a couple of years, I included him in the trade because I was also familiar with him in New York (note Ã¢â‚¬â€œ Birtsas came up with the Yankees and was traded to Oakland with Rijo in the Rickey Henderson deal).

Not all trades work out. Discuss the Jeff Montgomery for Van Snider trade.Ã‚Â Ã‚Â

That was a case where Pete didnÃ¢â‚¬â„¢t really want him, and we were set in the bullpen. We took a chance on Snider and it didnÃ¢â‚¬â„¢t work out. You have to remember in that era relievers were not as highly valued as they are now.

Did you bring in your own people for key roles or did you retain the people that were in place? Who were your key advisors?

It was a mix.Ã‚Â  I brought in John Cox from the Cubs to be the director of scouting, I had known him for years and he was available due to changes in Chicago.Ã‚Â  I had worked with Branch Rickey III and Tom Kayser in Pittsburgh, and they were available after Syd Thrift took over the Pirates.Ã‚Â  Chief Bender was a very valuable resource, he had been with the Reds since 1967.

What type of interaction did you have with Mrs. Schott?

I would see Marge in the office nearly every day.Ã‚Â  I kept her informed of any moves that I planned to make.Ã‚Â  I donÃ¢â‚¬â„¢t recall any specific budget meetings, but budgets were a lot looser back then. 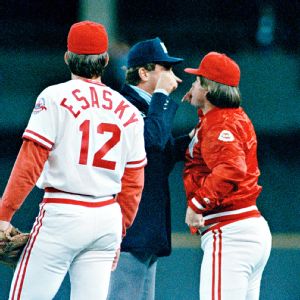 You inherited Pete Rose as manager. What type of interaction did you have with him? What type of issues did you discuss? What were his greatest strengths and weaknesses as a manager?

I met with Pete regularly and we had a good relationship. He had the respect of players which is essential, he obviously knew the game, and had amazing focus. He was still learning parts of the job, and he didnÃ¢â‚¬â„¢t believe in teaching at the major league level.Ã‚Â Ã‚Â  He also ran an undisciplined clubhouse Ã¢â‚¬â€œ for example allowing celebrities to throw batting practice. We set some parameters for Pete, and I believe that he would have developed into a very good manager. He was also willing to give young players a chance.

How did you and your team prepare for the June draft?Ã‚Â Ã‚Â

One thing that people donÃ¢â‚¬â„¢t understand is the GM rarely has much to do with the draft. Back then the scouts under John Cox pretty much handled it. Even now, the GM doesnÃ¢â‚¬â„¢t usually get involved except in the cases where money becomes an issue. The process of the draft hasnÃ¢â‚¬â„¢t changed that much Ã¢â‚¬â€œ you bring in your scouts, rank about a thousand players, and prepare supplemental lists Ã¢â‚¬â€œ for example players that have signability or makeup issues. The only real difference between then and now is the incredible amount of information you have available now. I was at the first draft in 1965 when it was a new process. Everyone had their picks on index cards. One funny moment occurred in the 50th round, when Jack Swarz of the Giants tried to pick John Wyatt, who had been drafted in the first round by the Dodgers.Ã‚Â  Told he was already taken in the first round, Swarz replied Ã¢â‚¬Å“I guess they liked him better than we didÃ¢â‚¬Â.

Tracy Jones had struggled with nagging injuries and wasnÃ¢â‚¬â„¢t a center fielder and I was familiar with Reed, Winningham and St. Claire from my time with the Expos. Winningham had been scouted as an amateur by Branch Rickey, and I had traded for him in the Gary Carter deal. He was a fine CF, and I thought he would develop into a regular. He didnÃ¢â‚¬â„¢t, but he and Reed were useful players in 1990.

That trade was a case where we thought that Esasky was more of an AL type and had peaked. Benzinger was younger and more athletic. (Note: Esasky had a great year for Boston in 1989 with a .277 / .355 / .500 slash line. He signed a three year deal with Atlanta, but was out of baseball after 9 games with the Braves due to a severe case of vertigo).

What do you remember about the 1989 season on the field?

The team was in first place in June, which was a tribute to PeteÃ¢â‚¬â„¢s ability to focus with given the circus that was going on around him. We were destroyed by injuries in the second half Ã¢â‚¬â€œ Larkin was injured at the All Star game and missed the rest of the year, and by the end of the year nearly all of our regulars were hurt (note Ã¢â‚¬â€œ Benzinger and Davis were the only players to start more than 120 games).

Daniels was a great hitter, but he was a liability on defense and we were worried about his knees. We were a little surprised that he passed his physical with the Dodgers. We liked Duncan and we needed a potential replacement for Ron Oester (Note: Oester was 33 in 1989 and would retire after the 1990 season).

The 1989 season was completely overshadowed by the Pete Rose saga. What do you remember of the events surrounding PeteÃ¢â‚¬â„¢s suspension?Ã‚Â

I received a phone call from the CommissionerÃ¢â‚¬â„¢s office two days before the start of spring training telling me that Pete was under investigation and he would have to be in New York to meet with the commissioner and I was to keep it secret. I donÃ¢â‚¬â„¢t know how they expected me to explain the absence of my manager from the first day of spring training, but word got out before the meeting. I really believe that had Pete come clean in that initial meeting he would have received a brief suspension and been quickly back in baseball. It was after that meeting that baseball hired John Dowd and the truly damaging evidence was discovered.Ã‚Â  I found he was going to be banned on the same day everyone else did (August 24th) and decided on Tommy Helms, who had been his bench coach, as the interim manager.

Was there a point where you realized you might be fired? How/when did you find out? Did you have any discussions with Bob Quinn after he took over?Ã‚Â Ã‚Â Ã‚Â

I was preparing to leave for the World Series when Marge fired me. I had no warning and was shocked when it happened. As far as I know, I was the only GM she fired in person. I did talk with Bob and wished him well.

Anything you would like to add about your time in Cincinnati?

I had a great time there and we had a great staff and good relationships with everyone. It was a terrific time, and there are no bad jobs in baseball. All jobs have plusses and minuses, you just have to enjoy the plusses and deal with the minuses. In 1990, I was still in Cincinnati scouting for the Twins and working at WCPO and was able to enjoy the success of the team.

You have been in baseball for 53 years. From your perspective, what are the biggest changes in the GMÃ¢â‚¬â„¢s job since you held that role?Ã‚Â

In many ways it hasnÃ¢â‚¬â„¢t changed that much. The job is still to get most out of the people that work for you and with you. The competition and the game between the lines is the same. It still is a high pressure 24/7 job. The biggest differences are the money, trades are much more about contracts than talent, and it is a much higher profile job than it used to be. There is much more information available, and the media has changed.

Thank you for your time (and trading for Jose Rijo).