Ã¢â‚¬Å“ItÃ¢â‚¬â„¢s too bad they donÃ¢â‚¬â„¢t put a stat on the board for first pitch strikes,Ã¢â‚¬Â my friend Andy said to me somewhere around the fifth inning of Saturday nightÃ¢â‚¬â„¢s Louisville Bats game. Ã¢â‚¬Å“If they did, I feel like itÃ¢â‚¬â„¢d be close to zero.Ã¢â‚¬Â

Of all the things I could say to sum up my first experience watching Keyvius Sampson pitch, that probably sums it up best. Sampson, whom the Reds claimed off waivers in January after the San Diego Padres released him, made his Louisville debut Saturday after ripping through AA ball with an impressive 1.85 ERA (though, in doing so, he did post a slightly less impressive 3.88 FIP). And while he did walk out of Louisville Slugger Field with a win, that says very little about SampsonÃ¢â‚¬â„¢s evening, and even less about the question I had going into the game, which was: What, exactly, do the Reds have in Keyvius Sampson?

Before we dive into that, though, letÃ¢â‚¬â„¢s start by getting the traditional statistics from last nightÃ¢â‚¬â„¢s game out of the way:

If you opened up that stat line on you MiLB app this morning, you probably thought, Ã¢â‚¬Å“Not bad – a win, a quality start, decent strikeout numbers.Ã¢â‚¬Â But heading to the game optimistic about seeing the young man whoÃ¢â‚¬â„¢d shut down AA hitters most of the season, I walked away from last nightÃ¢â‚¬â„¢s game less bullish on SampsonÃ¢â‚¬â„¢s potential to help the Redlegs in the near future.

The reason for that goes back to AndyÃ¢â‚¬â„¢s statement in the fifth inning – and to that last box in the graph above. Out of 100 pitches, Sampson threw 57 for strikes. Initially, I was prepared to attribute a great deal of this to first-start jitters; after all, we give rookies a bit of a pass on their first couple of innings in The Show because of nerves. Sampson seemed to be having a bit of this in his first inning as a Louisville Bat, giving up two runs and prompting a visit from the pitching coach after recording only one out. At that moment, I thought this article might have less than an inningÃ¢â‚¬â„¢s worth of material to draw from. 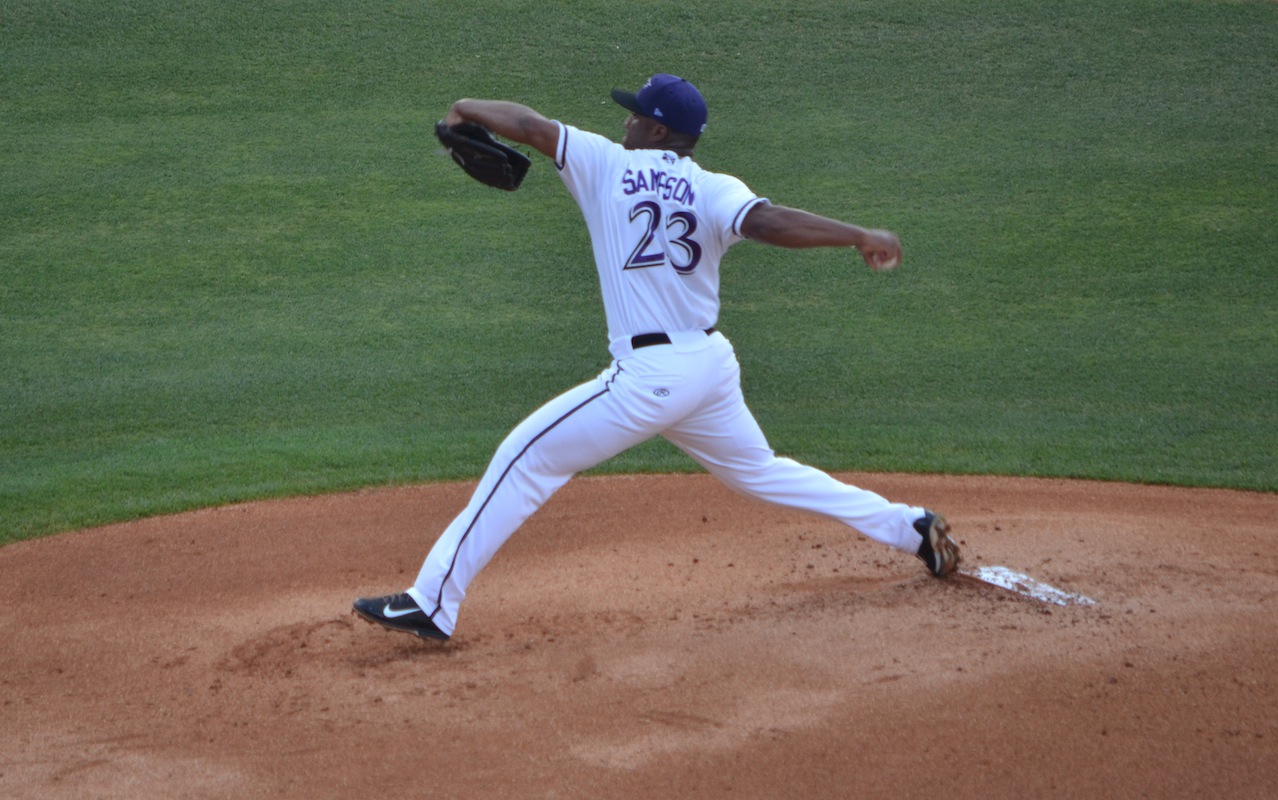 But Sampson followed the visit by getting the next two batters out – the first on an absolutely scorched line drive right at shortstop Hernan Iribarren, the second a beautiful backward K of Durham shortstop Hak-Ju Lee. And from there, Sampson seemed to settle down a bit; he gave up another run in the second inning, then threw four shutout innings to complete his night and earn a respectable line for the evening.

Even in those later innings, though, Sampson was more effective than dominant. In the effective category, he gave up only two hits after the second inning, and walked none, helping support the Ã¢â‚¬Å“Debut JittersÃ¢â‚¬Â theory. But he also never seemed command the strike zone; he had difficulty locating the low strike, which meant many of his pitches (particularly early) were either low balls or meatball strikes. And while he never threw more balls than strikes in an inning, his ratio was disturbingly close in every inning save the 1-2-3 third.

As a result, Sampson spent a good portion of the evening pitching from behind, which forced him into throwing a lot of fastballs and led to a number of loud outs. Again, with his worst innings coming at the beginning of the game, I was ready to write all of my concerns off to debut jitters Ã¢â‚¬Â¦ until I clicked over to SampsonÃ¢â‚¬â„¢s FanGraphs page and found that most of what I saw fit pretty nicely into the norms he established in Pensacola.

In AA, Sampson walked nearly five batters per nine innings (he struck out about 8.3), but thanks to some good luck (a strand rate of more than 83%), his ERA stayed well below 2. So in spite of his lack of strike zone command throughout the night, SampsonÃ¢â‚¬â„¢s walk rate was actually below his Pensacola numbers (though factoring in his one HBP last night – which is, essentially, a pitch-efficient walk – brings him substantially closer to that norm). However, his strand rate luck ran out a bit (70% last night), and his BABIP increased from his AA average of .275 to a whopping .368 last night, leading to a slightly rougher outing.

Of course, some might suggest that the BABIP number is unsustainable, and it probably is. But hereÃ¢â‚¬â„¢s where the eyeball test comes in; when Durham hit Sampson, they hit him hard. And while there was both a bunt single and an infield single among his seven hits, they were balanced by a number of very loud outs. In short, a .368 BABIP didnÃ¢â‚¬â„¢t look like luck.

The best coach I ever worked with asked all of his pitchers the same question: Ã¢â‚¬Å“Do you know what the best pitch in baseball is?Ã¢â‚¬Â The answer, of course, was, Ã¢â‚¬Å“Strike one.Ã¢â‚¬Â

That is the lesson Keyvius Sampson needs to learn if heÃ¢â‚¬â„¢s going to be an effective pitcher in the Cincinnati Reds organization. Last night, we saw flashes of a pitcher who can be effective – a pitcher who has the stuff to strike out nearly one hitter per inning, with an effective fastball and a curveball strong enough to freeze more than one Durham hitter.

But until he is able to find the strike zone on a more consistent basis, Sampson is going to continue running into trouble. Last night, AAA hitters punished him for pitching behind in the count at a much higher rate than AA hitters have this season, which shouldnÃ¢â‚¬â„¢t be surprising – thatÃ¢â‚¬â„¢s why these guys are in AAA, and the others arenÃ¢â‚¬â„¢t. Imagine how Major League hitters would punish him.

So while SampsonÃ¢â‚¬â„¢s AAA debut showed flashes of a pitcher who can get even Major League hitters out, itÃ¢â‚¬â„¢s hard to imagine him doing so with any consistency if he doesnÃ¢â‚¬â„¢t learn to command the zone and pitch ahead in the count. 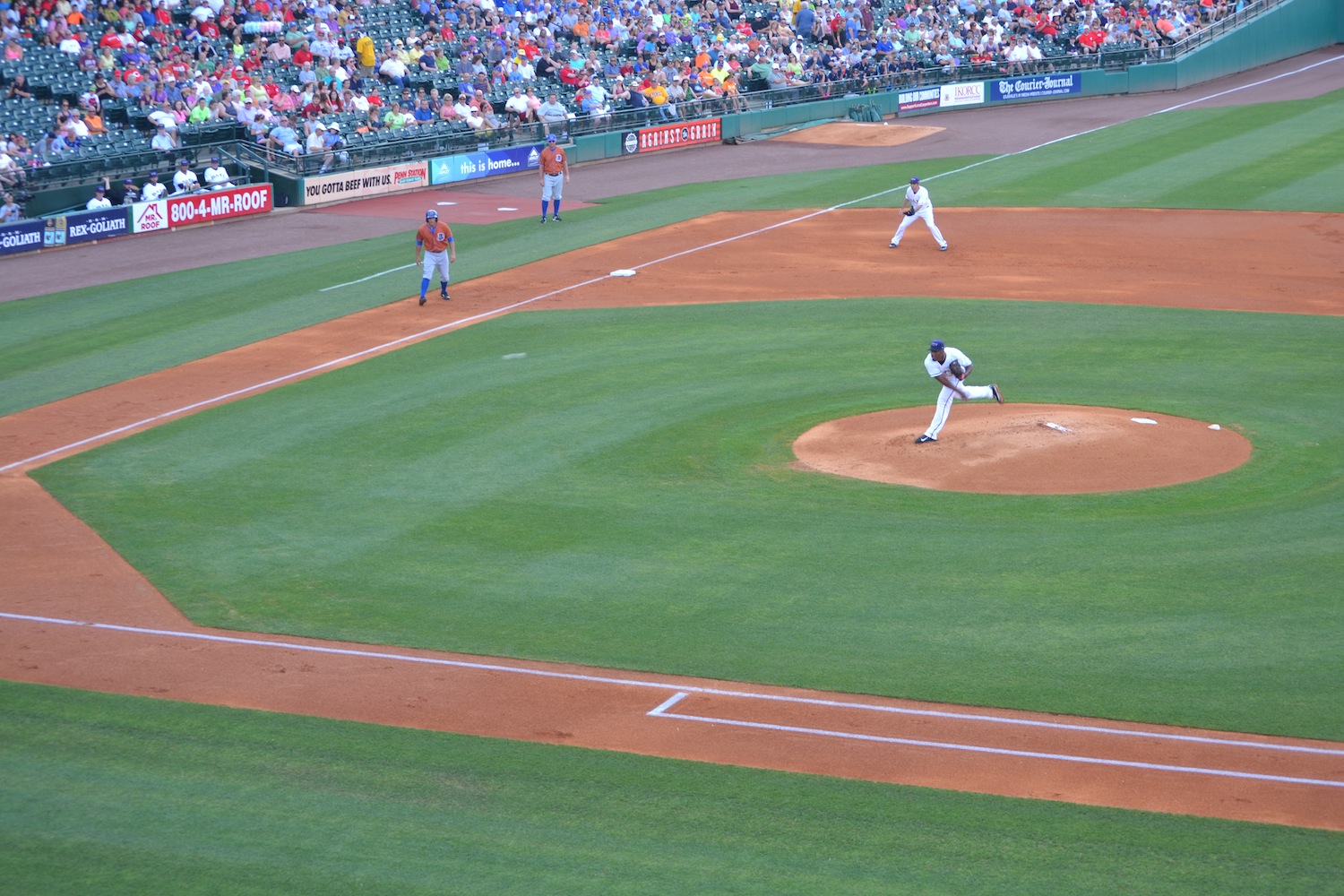 Other Observations from Louisville