The Reds offense was able to score three runs in the first inning off Cubs starter Jason Hammel, and chased him after just four innings. Reds ace Johnny Cueto however could not hold an early lead. Cueto gave up a 2-run, game tying home run to Starlin Castro in the sixth inning.

J.J. Hoover pitched scoreless innings in the 8th and 9th inning, and the game remained tied going into the 10th. Hoover was helped by a tremendous, game saving catch by Jay Bruce in the bottom of the 9th.

Todd Frazier reached on an error to lead off the 10th inning, and then Jay Bruce hit a single, putting runners on 1st & 3rd with 0 outs. After Pena struck out, freshly called up Eugenio Suarez hit a single through the hole to give the Reds a 5-4 lead. Aroldis Chapman shut the door in the bottom of the 10th, and the Reds won 5-4. The Reds have now won 4 of 5, and are 2-4 in extra inning games this season. 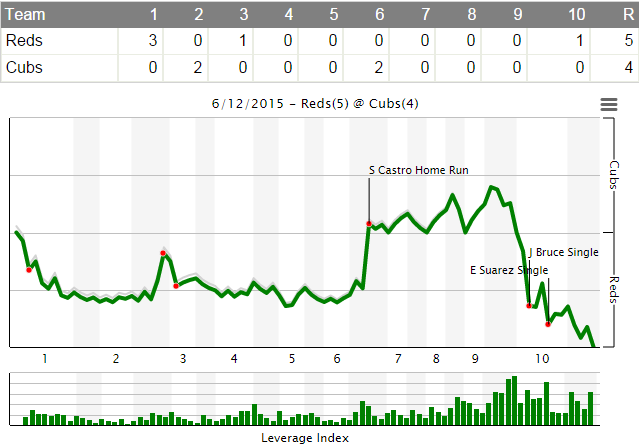 According to FangraphsÃ‚Â WPA statisticÃ‚Â (winning percentage added), the most important play of the game wasÃ‚Â Jay Bruce’s single in the 10th inning, putting runners on 1st & 3rd with 0 outs.Ã‚Â That single increased the Reds chances of winning by 23.9% (from 58.2% to 82.0%).

Todd FrazierÃ‚Â hit his 18th home run of the season in the third inning. Frazier now has 47 HR since the start of 2014, which is the 7th most in the MLB. Frazier entered today with 3.0 fWAR, which is tied for the 6th best in the MLB. You just can’t say enough good things about how good of a player Todd Frazier has become. He is a legit star, and making his mark as one of the greatest Reds power hitters ever.

Jay BruceÃ‚Â made an incredible game saving catch in the bottom of 9th, and then had a huge single to put runners on 1st & 3rd in the 10th inning with 0 outs.

Eugenio SurarezÃ‚Â drove in the game winning run with a single in the 10th inning on a 3-2 pitch. It was a nice at-bat by Suraez, as he battled to a 3-2 count against the Cubs closer Rondon.

Joey VottoÃ‚Â extended his on-base streak to 21 games with a walk this afternoon.

Ivan De Jesus Jr.Ã‚Â had an RBI double in the 1st inning, and also walked today. He has done a nice job filling in LF and 2B this week.

J.J. HooverÃ‚Â pitched a scoreless 8th and 9th. He walked the leadoff hitter in the 8th, but got a double play to end the inning. The Cubs got runners on 1st & 3rd against him in the 9th, but he was able to get Dexter Fowler to fly out to end the inning. Hoover also benefited on the great catch by Bruce above. I hate wins and losses for a pitcher, but it is crazy that Hoover has gone from 1-10 last year to 5-0 this year. Hoover hasn’t allowed an earned run in his last 23 appearances. J.J. looks a lot like 2013 Hoover, and nothing like 2014 Hoover.

Aroldis ChapmanÃ‚Â struck out Rizzo and Bryant in the 9th, in route to his 13th save of the season. Chapman could be on the move though, as reported by Jon Paul Morosi.

Sources: Aroldis Chapman has been the subject of trade discussions between #Nats and #Reds. No deal is close. @FOXSports

Johnny CuetoÃ‚Â couldn’t hold a 3-0, and 4-2 lead today. Cueto allowed a 2-run tying home run to Starlin Castro in the 6th inning. Cueto has nearly always pitched well with a lead. We blame our good friend Joel Luckhaupt for the curse of Cueto. But really, Cueto was actually not that bad: 7.0 IP, 7 H, 4 ER, 0 BB, 9 K. I will take 9 strikeouts and 0 walks any day of the week.

Put another way, the Cueto virtually unbeatable with a 2-run or better lead. #NotAJinx

I am not sure how Skip Schumaker is still allowed to play inÃ‚Â the field. For the second time since Saturday, Skippy misplayed a pretty easy ball rolling to him. Skip did make a nice play later in the game (video), but I’d even argue that he took a pretty bad route to that ball. Schumaker entered today with -60 career Defensive Runs Saved.

Brennan BoeschÃ‚Â struck out with runners on 2nd & 3rd with 1 out in the 10th inning. The Reds had a 5-4 lead at the time, and another run would have really come in handy there.

I saw the Reds future prospects flash before my eyes in the 4th inning. Johnny Cueto singled to CF, but was nearly thrown out by Dexter Fowler. On the close play, Cueto sort of tripped over first base, eerily similar to Zack Cozart on Wednesday. Hopefully this was a swift reminder to the Reds front office that they are a pulled hamstring, a sore shoulder, or even a blister on a finger away from getting nothing in return for their ace (well, other than a compensation draft pick). Is that worth making sure Cueto pitches in the AS Game in a Reds uniform? No. No. No.

Brandon PhillipsÃ‚Â pinch-hit for Cueto in the 7th inning. It was Phillips first appearance since Tuesday. He has been dealing with a groin injury. Phillips had a tough 6-pitch at-bat, but flied out to CF.

John Fay of the Cincinnati Enquirer reported that the Reds have put the Devin Mesoraco experiment in LF on hold. Mesoraco left WednesdayÃ¢â‚¬â„¢s game with the AAA-Louisville Bats with soreness. Mesoraco returned to Cincinnati on Friday instead of continuing on with the Bats. Mesoraco will rehab/recover in Cincinnati, and when the Reds return on Wednesday from the road trip they will re-evaluate Mesoraco.

Pirates:Ã‚Â The Bucs host the Phillies tonight at 7:05. The Pirates will send struggling Jeff Locke to the mound (5.37 ERA) to face Kevin Correia (who was signed by the Phillies on Monday).

Cardinals:Ã‚Â The Cards are coming off a surprising series loss at home to the Rockies. They will host the Royals tonight at 8:15. Jamie Garcia (2.67 ERA) will make his fifth start of the season for the Cardinals, and he will face the Royals fiery starter Yordano Ventura (4.62 EA). The Cardinals-Royals game will be on the MLB Network tonight.