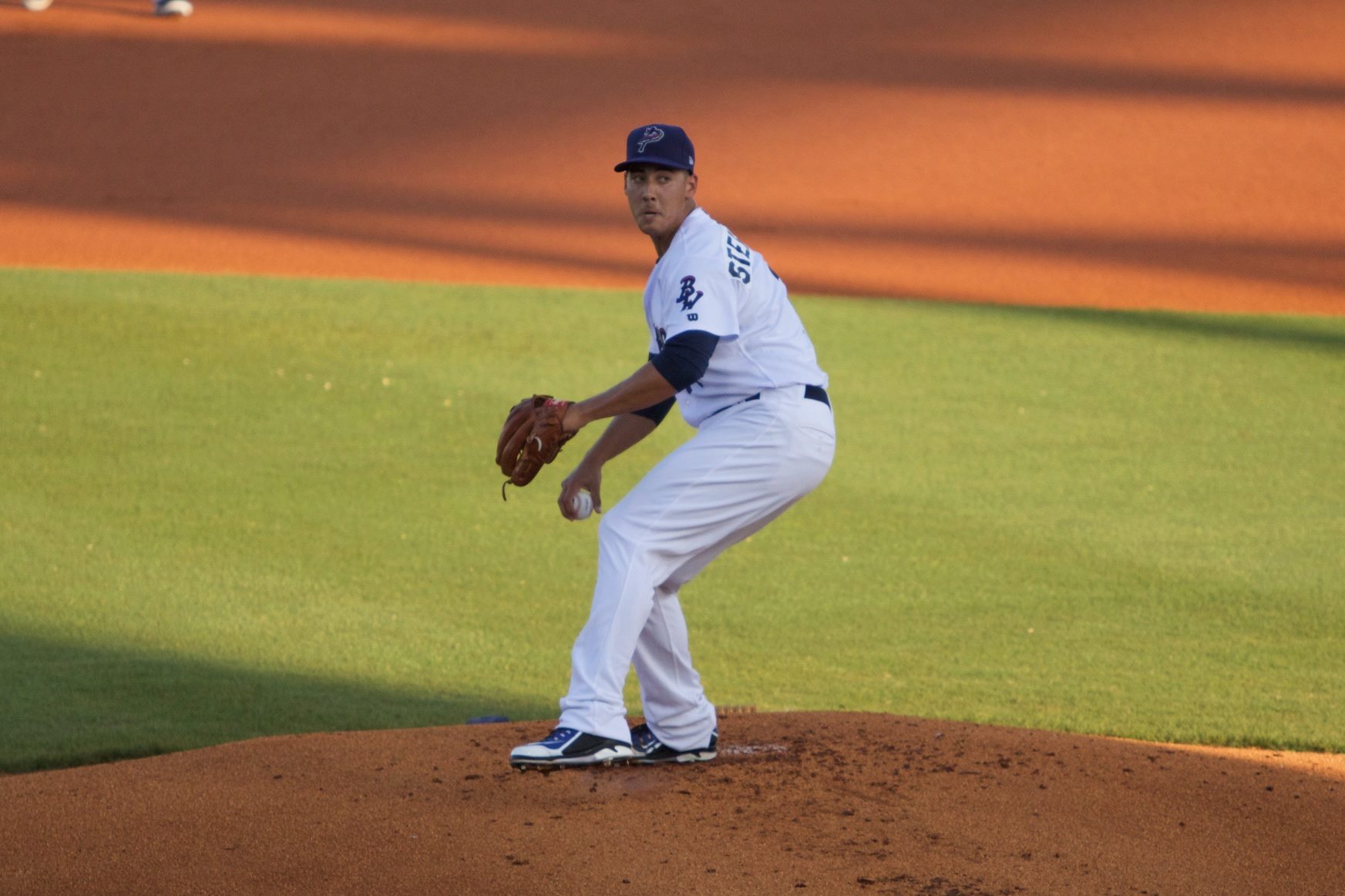 After a hit-or-miss season with Pensacola in 2014, Robert Stephenson has taken the gloves off.

The RedsÃ¢â‚¬â„¢ consensus top prospect has carried an aggressive approach into his last few starts. Where he would try to focus on painting the corners last season, Stephenson is using more of the plate and trusting his infield.

Ã¢â‚¬Å“When I get behind in the count, [IÃ¢â‚¬â„¢m] just going after the hitters and just letting them hit the ball,Ã¢â‚¬Â Stephenson said. Ã¢â‚¬Å“I think that approach really got me out of some situations where instead of trying to nibble on the corners, just throw the ball over the plate and let them get themselves out.Ã¢â‚¬Â

Granted, opponents arenÃ¢â‚¬â„¢t finding much luck against Stephenson lately. In six starts since May 13, Southern League hitters are batting just .135 (17-126) against the right-hander. His last 25.2 innings have been just south of elite; he has allowed three runs, one unearned, on eight hits, five walks and 34 strikeouts.

Ã¢â‚¬Å“I think the biggest thing is being able to get ahead of hitters,Ã¢â‚¬Â said Stephenson, who is challenging hitters earlier in counts. Ã¢â‚¬Å“As soon as I can get ahead, then I can pretty much do anything I want with the hitters. I can go [with] either an off-speed pitch or come back to the fastball. But when youÃ¢â‚¬â„¢re behind in the count, you pretty much go at them with the fastball, and thatÃ¢â‚¬â„¢s when you get in trouble.Ã¢â‚¬Â

StephensonÃ¢â‚¬â„¢s success is refreshing after a rough start. After being knocked out of the first inning on May 1, his ERA stood at 8.31 (16 earned runs in 17.1 innings) with opponents batting .297 against him and posting a .971 OPS. At his request, Stephenson met with Blue Wahoos pitching coach Jeff Fassero and Reds Minor League pitching coordinator Mark Riggins, who was traveling with the team.

Pensacola manager Pat Kelly coached Stephenson in his first professional season and saw his top-of-the-rotation potential with Billings in 2012. In seven starts with the Mustangs, Stephenson pitched to a 1-0 record and 2.05 ERA with eight walks to 37 strikeouts.

Ã¢â‚¬Å“I saw him his first year coming out of high school, and I thought this is what we were going to have,Ã¢â‚¬Â Kelly said of his dominant stretch. Ã¢â‚¬Å“There was a little regression two years ago. We may have rushed him a little bit to this level. He took his lumps last year, but I think he learned a lot, and the first part of this year was a learning experience.

Ã¢â‚¬Å“HeÃ¢â‚¬â„¢s a little bit stubborn. Stubborn is good. I think eventually he came around to listen a little bit and realize that he doesnÃ¢â‚¬â„¢t have to throw the ball through a wall every time he throws a pitch. I think heÃ¢â‚¬â„¢s starting to pitch now, and he can pitch very successfully at 94, 95 mph. ThatÃ¢â‚¬â„¢s not too shabby.Ã¢â‚¬Â

Stephenson has been a world-beater in his last four starts. On May 23, he overcame a 43-pitch first inning to strike out a career-high 11 batters. He pitched seven shutout innings on May 29 with 10 strikeouts and followed up with an eight-inning one-hitter on June 4. Stephenson retired 23 of his last 24 batters in that start, including the final 15. On Tuesday, Stephenson scattered three hits while striking out eight. It is the first time in his professional career that he has posted three straight starts of seven innings or more.

Stephenson struggled with his control in 2014, when he finished 7-10 with a 4.74 ERA. He also posted career highs with 4.9 walks per nine innings and a 1.38 WHIP. Walks were a concern earlier this season, but Stephenson is sporting a more deliberate throwing motion to cut down on free passes.

Ã¢â‚¬Å“I think the biggest thing is my tempo,Ã¢â‚¬Â Stephenson said. Ã¢â‚¬Å“I think I had a lot of struggles last year just from rushing and it would cause my arm to be late, and IÃ¢â‚¬â„¢d never really have the same arm slot.Ã¢â‚¬Â

Back for his third taste of Double-A competition, Stephenson has embraced his opportunity to struggle. As counterintuitive as it sounds, the best thing a Minor League pitcher can do is fail.

Ã¢â‚¬Å“Obviously the past couple of years, last year and then the beginning of this year, I was struggling a lot,Ã¢â‚¬Â Stephenson said. Ã¢â‚¬Å“ItÃ¢â‚¬â„¢s good to turn things around. Going through those struggles right now rather than at some point in the future in the big leagues Ã¢â‚¬â€œ thatÃ¢â‚¬â„¢s kind of what you want to get out right now. Do all your learning in the Minor Leagues. That way by the time you get up [to Cincinnati], you feel like youÃ¢â‚¬â„¢re confident and ready to go.Ã¢â‚¬Â

Stephenson has two Major League caliber pitches: a fastball that sits between 91 to 94 mph and a biting curveball that Baseball America and MLB.com consider the best among his peers. Stephenson has made the biggest strides with his two-seam changeup, which he pairs with the fastball for a deadly strikeout combination. Though he can dial his fastball up into the triple digits, Stephenson has backed off this season.

Ã¢â‚¬Å“I havenÃ¢â‚¬â„¢t felt like IÃ¢â‚¬â„¢ve been able to command my fastball at higher speeds, so IÃ¢â‚¬â„¢ve been comfortable throwing a little bit slower this year,Ã¢â‚¬Â Stephenson said. Ã¢â‚¬Å“But IÃ¢â‚¬â„¢m able to throw it in the zone. It seems to be working a lot better for me. IÃ¢â‚¬â„¢m still getting hitters out like that, so I have no problem with that.Ã¢â‚¬Â

Stephenson also credits a fastball adjustment for his recent string of success. After walking four batters in the first inning on May 23, Fassero told Stephenson to stay on top of the ball.

“When I got my fingers on top of my fastball I wasn’t cutting balls and pushing them to the outside,” Stephenson told MiLB.com. “It made both my off-speed pitches a lot better, too. Ever since then, we’ve made sure we worked on that.”

As for an impending promotion, surely the waiting game is close to over.

Ã¢â‚¬Å“ItÃ¢â‚¬â„¢s definitely something to think about right now,Ã¢â‚¬Â Stephenson said after TuesdayÃ¢â‚¬â„¢s start. Ã¢â‚¬Å“I feel pretty comfortable with how IÃ¢â‚¬â„¢ve been throwing, and everything seems to be going pretty well. I feel like everythingÃ¢â‚¬â„¢s pretty much on lock as far as mechanics, and I think weÃ¢â‚¬â„¢re getting pretty close where I feel confident enough that IÃ¢â‚¬â„¢ll be able to get hitters out at Triple-A or the big league level.Ã¢â‚¬Â

>> WINKER HEATING UP: Jesse Winker knocked his first home run since April 23 in PensacolaÃ¢â‚¬â„¢s 6-4 loss Monday night. The solo shot was the first in 163 plate appearances.

“I just happened to get in a hitter’s count right there and just put a good swing on the ball, and it happened to get up and get out,” Winker said. “It felt good. It was a little bit of a dry spell, but that Pensacola breeze sometimes can work against you.”

Pensacola Bayfront Stadium has tended to stifle the left-hander’s power, though he knocked his third home run of the year the other way into Pensacola Bay. In his last 15 games since May 23, Winker is batting .306 (19-62) with seven extra-base hits, five RBIs and eight runs. He also has a .862 OPS over that span.

Said Winker of Stephenson: Ã¢â‚¬Å“It seems like he’s been striking everybody out. He’s got electric stuff, and he’s never a comfortable [at-bat].”