Other than live sporting events on TV or online, I get my news via Twitter now. Other methods are molasses-slow by comparison. With no local or national televised broadcast of today’s game, that’s the way I first learned the details about Zack Cozart. In retrospect, 140-character messages were the easiest way to absorb the blow.

At 12:45 p.m., my feed filled up with reports that Zack Cozart had suffered what appeared to be a serious knee injury. It’s in no way fair that a player who gives his best every play of every inning of every game hurt himself on hustle, trying to beat out a ground ball out at first. At the time, the radio broadcast team didn’t know a diagnosis, of course. But their gloomy tone spoke volumes. Jeff Brantley is no doctor, but he’s been around enough sporting events that his simple statement was likely to be dead-on:Ã‚Â When you have to be carried off, that’s not a good thing. 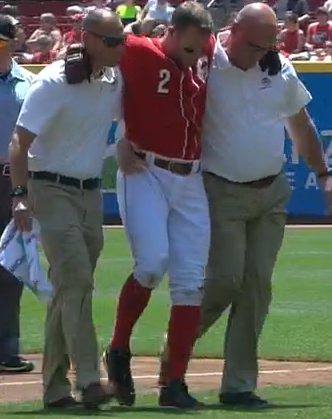 Redleg Nation has been holding its collective breath for almost three hours, waiting for the diagnosis. Meanwhile, the video of the play was released (warning: gruesome injury to popular player). And, of course, there were GIFs on Twitter:

The Reds haven’t disclosed the extent of Cozart’s injury. They may have to wait for swelling to go down before they do an MRI. But you’d have to put your money on a heartbreaking sentence with “season-ending” somewhere.

Zack Cozart was having the best season of his career, by far. On pace for 25 home runs. He’d cut his strikeout-rate and raised his walk-rate. All the while, he continued to play Gold Glove defense at shortstop. Cozart was among league leaders in several defensive metrics for shortstops. He deserves to be chosen for the upcoming All-Star game in Cincinnati.

He made all the plays.

I just have one more word about Cozart’s injury.

Uncle, to whomever gave Devin Mesoraco a condition that allowed him to catch only a handful of games and then sentenced him to navigate a new position just so he can bat for a few weeks.

Uncle, to whomever let Homer Bailey return from one surgery and six months of rehab only to give him another injury requiring surgery and a year of rehab. (Bailey was spotted in the clubhouse the past two days, without a brace.)

Uncle, to the whomever has given Brandon Phillips a series of nagging injuries. And put Marlon Byrd on the DL. And Billy Hamilton on the bench.

Uncle, to whomever has now likely taken Zack Cozart’s wonderful game from us.

Yes, other teams have injuries, too. This isn’t about fairness. And I’m not giving up on the team.

For the second game in a row, the Reds scored four runs in the first inning, something they hadn’t done all year before yesterday. Ivan De Jesus hit a second three-run homer (video) this week. Todd Frazier made an excellent defensive play fielding a pop-up in the visiting dug-out (video). He also had two hits and scored two runs. Brayan PeÃƒÂ±a had four hits

Pitcher Jon Moscot, making his second start for the Reds, went 6 innings. He gave up six hits and two walks. He struck out two. Jeff Brantley observed that Moscot was pitching with more confidence than in his previous start. Ryan Mattheus and Tony Cingrani managed to get through the seventh inning without giving up a run. J.J. Hoover pitched the eighth and still hasn’t given up a home run this year. He’s had 22 straight appearances without giving up a run. That’ll do. Time to turn the page on Hoover Sucks. Aroldis Chapman, another 3-run save.

By the middle of the game, the Reds were playing with such a short lineup, in the sixth inning with a two-run lead, they let a pitcher hit even though he was going to be removed from the game. A pitcher without a major league hit. John Moscot, of course, singled. Apparently he can hit some.

Just looked it up, Moscot was 4 for 8 at Triple-A this year.

The Reds ended up winning this game 5-2. They swept the hapless, terrible Philadelphia Phillies, a team with the ninth-highest payroll and worst record.Ã‚Â The Reds are 27-31, four games from .500. They’ve won four in a row and at the moment, I can’t feel the slightest bit of joy from that. 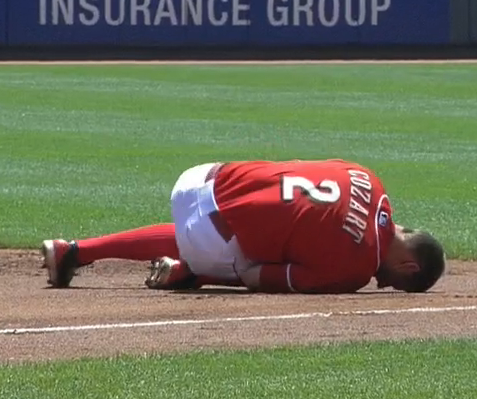