[This report was submitted by Warren Leeman, known in these parts as Shchi Cossack. He attended the Louisville Bats game in Columbus on Monday, offering this first-hand report on Devin Mesoraco’s adventure in left field. Thanks, Cossack! ]

After drenching rain showers covered the drive to Huntington Park on Monday evening, the tap from the cloud cover shut down as we parked the minivan and made our way to the stadium. The requisite chamois produced by the diligent ushers were in high demand as we made our way to the front row of the LF bleachers. The weather forecast was for dry skies to continue after the start of the game until the scheduled end of the game. My biggest fear was that the wet field conditions would relegate Devin Mesoraco to a DH roll rather than a defensive position a mere 10 meters in front of me in LF. 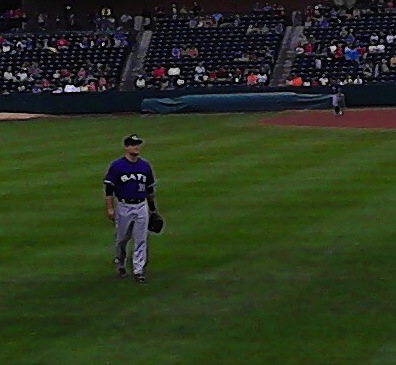 When the lineups flashed on the scoreboard and Devin was hitting 3rd and playing LF, my fears subsided. For the first time in his professional career, Devin Mesoraco found himself playing a defensive position other than catcher as he trotted out to LF for the Bats at Huntington Park against the Clippers. Based on the reactions of the fans around me, the highlight and sole purpose of the game was seeing Devin in LF.

With bases empty and 2 outs in the top of the 1st inning, Devin came to the plate and promptly struck out looking at a called 3rd strikeÃ¢â‚¬Â¦

That plate appearance was disappointing, but we braved the rain to see Devin take his defensive position in LF. The game and his offensive performance were secondary to seeing Devin in LF. Then came the moment I had anticipated as Devin came out of the 3rd-base dugout and jogged out to LF. After a few obligatory warm up tosses, Devin settled in to begin his career in LF (for however long that might last).

From the time Devin positioned himself in LF, his demeanor was nervous and unsettled. Devin had happy feet through the first couple of innings but gradually settled down and began to relax. With 1 out in the bottom of the 1st inning, Devin got his closest taste of any defensive action of the entire game when Martinez popped out to Suarez in deep SS/ shallow LF.

Alas, that was the only defensive play even closely resembling action for Devin. In the top of the 3rd inning, Devin absolutely crushed a line drive to the glove side of the ClipperÃ¢â‚¬â„¢s 3B, but all the 3B had to do was open his glove to field the screaming line drive for an easy out.

In the 4th inning, the sun dropped below the clouds on the horizon, just above the dominant green Huntington Park stadium sign atop the wall behind home plate, making LF a severe sun field. In the top of the 4th inning, Dominguez launched a drive to LF. As soon as the ball lofted about the Huntington Park sign, the sun blinded the LF bleachers. I knew the ball was coming hard and fast over the LF wall and I was sitting in the front row, completely blinded, with a little Cossack on either side of me. Fortunately the ball cleared the wall down the line and not to straight away LF. In the bottom of the 4th inning as Devin took the field and looked over his shoulder toward home plate, he realized he needed sunglasses, something he never needed when crouched behind the plate, and shouted to the dugout for the requisite sunglasses. After several minutes, Devin gave up waiting for someone from the dugout to find and produce a pair of sunglasses and waived them off as he positioned himself in LF.

After 3 PA, DevinÃ¢â‚¬â„¢s night in LF was over as Steve Selsky moved from RF to LF and Y-Rod took over in RF. Of course, as soon as Selsky took up a position in LF, balls began raining in from left-centerfield to the left field line. It sure would have been nice to see Devin fielding those drives around LF, but those opportunities would have to wait for another day and another game.