Today was Jay Bruce poster day. If any kids showed up because he is their guy and they wanted his poster, they were rewarded by watching their favorite player hit two home runs.

Crushed Jay Bruce practically hit a ball out of GABP to right center field (video). Estimated distance: 438-444 feet. (For the record, the warning track is about 365 feet there.) It was the longest home run hit by a Reds player this year. Even before today’s blast, Bruce had put up career-best numbers for average batted-ball distance. Ã‚Â 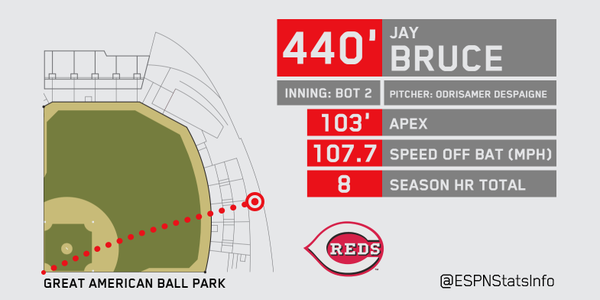 They All CountÃ‚Â Bruce delivered a three-run homer in the sixth inning. It snuck just over the right field fence in front of the Padres bullpen.

Makes All The Plays Zack Cozart made Gold Glove caliber put-outs in the first and second innings. Those plays were needed since the Padres had two runners on base in each case. Cozart went into today’s game tied with Andrelton Simmons for the most Defensive Runs Saved for a shortstop. Cozart is ahead of Simmons based on Ultimate Zone Rating/150.

Trade Stock UpÃ‚Â Johnny Cueto seems to have put the temporary elbow pain behind him. Suitors can use the Padres as references, particularly Cory Spangenberg. Cueto dialed up 95 and 96 mph fastballs against the Padres second baseman in the 4th inning. Johnny Beisbol pitched seven shutout innings, walking two and striking out nine.

Double, You’re FunÃ‚Â Todd Frazier shot his 15th double of the year into the right field corner in the sixth inning. Frazier had only 22 doubles all last year.

On Base Again With his sixth inning single, Joey Votto reached base for the 16th consecutive game, dating back to May 20. Votto led the National League in OBP for four consecutive years, from 2010-2013. At the end of Votto’s month-long slump, his OBP had fallen to .373. With his two singles today, it’s back up to .400.

About (Deleted) Time J.J. Hoover pitched a clean — as in NO WALKS — eighth inning. Psst…Hoover hasn’t given up a home run this year. Aroldis Chapman pitched in a non-save situation. Not sure what’s worse, that the closer was used with a 4-run lead or that it felt absolutely necessary.

If Only If the Reds bullpen had pitched as well in the past six games as they had in the six games before that, the Reds record would be 27-28, just 3 games out of the second Wild Card spot.

Extra CheeseÃ‚Â Chapman’s strikeouts of Yonder Alonso and Will Middlebrooks meant free pizza for everyone with a ticket.

Payback Time The Phillies arrive to GABP for a three-game series tomorrow.