Marlon Byrd, by media accounts, is a personable, hard-working guy. He appears to be a consummate professional. (Other than that time three years ago he tested positive for tamoxifen, a drug used to treat breast cancer that also hides the effects of increased testosterone. Byrd was suspended by MLB for 50 games.)

The Reds are facing a not-really-that-difficult decision regarding ByrdÃ¢â‚¬â„¢s playing time. Based on the contract that Bryd negotiated with the Philadelphia Phillies prior to his trade to Cincinnati, the Reds are paying Byrd an $8 million salary to play this year. The Phillies coughed up half of that amount to grease the wheels on the trade. The remainder is a guaranteed sunk cost to the organization, barring a trade.

The looming issue concerns an option provision in ByrdÃ¢â‚¬â„¢s contract: If he records 550 plate appearances in 2015, his salary becomes guaranteed for 2016, again at $8 million. 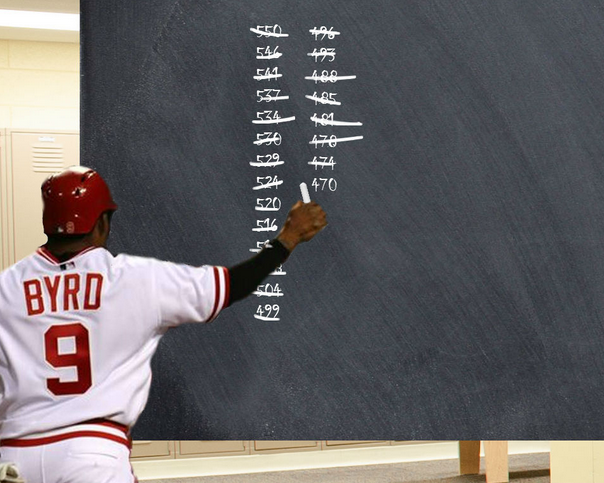 First, to state the obvious: No way, no how should the Reds allow ByrdÃ¢â‚¬â„¢s 2016 option to vest. The outfielder, who would turn 39 during the 2016 season, began to show severe decline in 2014, a downturn which predictablyÃ‚Â has accelerated this year. Despite the gorilla dust of a couple good weeks, Marlon Byrd is losing his battle with Father Time. Unfortunately, he’s doing it on the Reds’ nickel and worse, as their everyday left fielder.

Byrd’s defensive performance has become cover-your-eyes scary. To be fair, the Reds asked Byrd to play a new position at age 37, so a big chunk of blame for the nightly horror show falls squarely on the person or people who somehow reached the conclusion it would work out.

How bad was the mistake in judgment? Only four major league players have compiled worse defensive metrics than Marlon Byrd in 2015 (and all four of them are hittingÃ‚Â way above league average). Byrd’s defense is on pace to cost the Reds a whopping 26 runs compared to an average player. To put that into perspective, Byrd’s negative defense more than offsets the significant positive defensive contribution from Brandon Phillips and Zack Cozart combined.

And thatÃ¢â‚¬â„¢s just this year. Think how much farther down the aging curve he’ll be next summer. Unless the Reds know something the rest of us donÃ¢â‚¬â„¢t about an upcoming change in the designated hitter rule, Marlon Byrd will have to play the field if he stays in a Reds uniform.

Yes, the case against allowing Byrd’s 2016 option to vest is open and shut the front door.

(I was about to write that it would be hard to imagine an organization making a worse mistake than allowing Byrd’s option to vest, but remembered this bunch brought us Kevin Gregg in the eighth inning on Opening Day and Jason Marquis still in the starting rotation. It is taking every bit of willpower I possess to resist the temptation to use the adjective Byrd-brained here.)

The Reds have known about the option clause in ByrdÃ¢â‚¬â„¢s contract from the start. So far, they have shown no inclination to manage ByrdÃ¢â‚¬â„¢s plate appearances. In fact, they appear to be indifferent — or worse — to the situation.

Bryan Price played him in both halves of the doubleheader in Chicago. Byrd took 5 plate appearances in a game the Reds were losing 11-2 and in a game they were winning 16-10. Despite his egregious defense, the Reds havenÃ¢â‚¬â„¢t substituted for him in late innings. They didn’t give him much time off during his horrible April. So far, the Reds are acting as if they are determined to see that Byrd reaches 550 PAs.

On the other hand, several factors could intervene and resolve the issue:

Injury Byrd is 37 years old. A pulled hamstring or groin muscle that results in a trip to the disabled list would prevent the option from triggering.

Mid-season or September Call-up If the Reds call Jesse Winker up in July or September, Byrd would ride the bench enough that he would miss the target.

Trade If the Reds fall out of contention, you’d have to think Byrd will be traded to a contender in the American League looking for a right-handed bat. A Byrd-in-the-hand would then become someone elseÃ¢â‚¬â„¢s problem.

The prospect of a trade is yet another reason why the Reds should begin to tap the brakes on Marlon ByrdÃ¢â‚¬â„¢s playing time right now. Trading the left fielder will be substantially easier if the 2016 option is no threat to vest.

Consider the difficulty the Phillies had unloading Jonathan Papelbon this past offseason. It wasnÃ¢â‚¬â„¢t the closerÃ¢â‚¬â„¢s $13 million salary in 2015 salary that scared off potential trade partners. It was the clause in PapelbonÃ¢â‚¬â„¢s contract that a $13 million option for 2016 would vest if he finishes 48 games in 2015.Ã‚Â A team wonÃ¢â‚¬â„¢t acquire Marlon Byrd to use in the stretch run when if has to keep one eye on the Byrd Cage.

Even without injury, call-up or trade, the Reds still have a reasonable course of action. The club has to subtract just 65 plate appearances from the current rate. At four appearances per game, thatÃ¢â‚¬â„¢s 17 games, or four games per month. You wouldn’t want to cut it that close, but how much worse could Brennan Boesch or Skip Schumaker be for four games per month?

The Reds could kill two Ã¢â‚¬Â¦ birds Ã¢â‚¬Â¦ with one stroke of Bryan Price’s pen by cutting back now on Marlon ByrdÃ¢â‚¬â„¢s playing time. It would mean sitting him one game each week. Seems like a reasonable notion for a 37-year-old player. Don’t want to wear him down, after all. If they start that process now, the Reds would end up with more flexibility on how to use him later in the season, if that matters. It would also make Byrd a much more attractive trade candidate.