One of the most common themes the Reds’ broadcasters discuss on a daily basis is the team’s “chronic inability” to hit with runners in scoring position. From listening to the games you probably know by now that the Reds are dead last in the major leagues in AVG w/ RISP. The voices of the Reds on both TV and radio have been harping about batting average with runners in scoring position for several years now. It is a common refrain and a frequent topic of conversation and has been for a long time. Let’s nail some facts to the wall and find out just how concerned we should be about this problem…

We can see in the chart that the Reds are in fact the worst team in baseball in terms of AVG w/RISP this year with a .194 average in that situation. The team the Reds are currently playing, the Kansas City Royals, have been amazing with RISP, batting well over .300 in those critical situations to lead the league by a comfortable margin. Obviously the Royals have been much more efficient at converting their prime scoring opportunities into runs. One would think that excelling at hitting with runners in scoring position would automatically lead to scoring a lot of runs, but that does not appear to be the case. One thing you can observe in the chart above is that there is not much correlation between a team’s AVG w/RISP and their Runs per Game. For example, the Rockies have been 2nd-best with a .302 AVG w/RISP yet they are only 21st in runs per game. Similarly, the Diamondbacks have hit only .245 w/RISP (21st place) yet they are 5th in the majors in runs scored per game. This is true all up and down the chart. 11 of the 30 teams have ranks in these two stats that differ by 10 or more slots. The Reds are 30th in AVG w/RISP yet they are much better at actually producing runs (20th).

Why is that? There are severalÃ‚Â reasons. The first is that some teams are better at getting runners into scoring position in the first place. The Tigers have generated 437 plate appearances with runners in scoring position, the Angels have generated only 304 plate appearances with runners in scoring position. That means the Tigers have had 44% more opportunities to bat with RISP. The Cubs have produced the 2nd most RISP opportunites with 421, so it is no surprise that they rank 14th in scoring even though their lowly .223 AVG w/RISP ranks 26th. You can succeed with a poor AVG w/RISP if you createÃ‚Â more RISPÃ‚Â opportunities. The best way to create extra RISP opportunities is to have a high team On-base percentage (OBP).

More reasonsÃ‚Â why AVG w/RISP does not correlate well with scoring areÃ‚Â because you don’t need to have a runner in scoring position in order to score a run. Runners can be knocked in from first base, or they can drive themselves in by hitting a home run. Power-hitting teams that hit a lot of extra-base hits can produce more runs than a singles-hitting team with a higher AVG w/RISP. Teams thatÃ‚Â hit a lot of extra-base hits willÃ‚Â have a high team slugging percentage (SLG).Ã‚Â It is also possible to get a hit with a runner in scoring position without actually scoring a run. If a runner is on second base and the batter gets a base hit, the runner might not score. He could stop at third base or he could get thrown out at the plate.

This brings up the question of why are weÃ‚Â looking at a form of batting average in the first place? AVG w/RISP is merely a subset of AVG. Longtime readers of Redleg Nation know that batting average is a severely flawed stat that is considered misleading and obsolete by modern baseball standards. Batting average has two major flaws: it ignores walks completely, and it treats all hits the same. Each type of hit, including the walk, has a different value. It is obvious that home runs are much more valuable than singles. Walks are not as valuable as hits but they do often lead to runs. So why use a statistic that totally fails to consider those factors? Since we know that batting average is a ridiculous stat, it therefore follows that batting average with runners in scoring position is also a ridiculous stat. To evaluate a hitter’s performance there are much better statistics than batting average. OBP and SLG are both much more accurate than AVG and both of them correlate with run scoring much better than AVG does. Add them together to get an even more accurate stat called OPS (OBP plus SLG). There are some even better statistics out there on stat-geek sites like FanGraphs and Baseball Prospectus. wOBA and wRC+ are the best available right now but I am sure new ones will be developed.

Here are the Reds’ batting average numbers over the last several seasons:

This chart shows that the Reds almost always finish the season with an AVG w/RISP that is very close to or slightly higher than their overall batting average for the season. This is true around the league going back for many decades. The Reds are scoring more runs per game this year than last year despite hitting 51 points lower with runners in scoring position! Their overall batting average is the same (.238) but despite tanking in AVG w/RISP they are scoring more runs. Why? Because their OPS has risen dramatically. Their OBP and SLG are both way up. They are getting more runners on base and they are getting more extra-base hits. Those factors are much, much more important than their AVG w/RISP.

The league average AVG w/RISP over the 2009-15 period is .257, so the Reds were slightly below average in that stat, but not to the extent that the broadcasters have made it seem. The constant moaning about the Reds’ “chronic inability to hit with runners in scoring position” just is not backed up by the numbers. The Reds have hit just about like we would expect w/RISP — slightly better than their overall batting average. The broadcasters Ã‚Â have perceived the problem to be much worse than it has been. The Reds’ problem scoring runs the last several years has been due to overall mediocrity in all facets of the offensive game, not due to a glaring inefficiency with runners in scoring position.

One more reason to disregard AVG w/RISP numbers: Small Sample Size. Since 2007 leaguewide, only 26% of plate appearances have come with runners in scoring position. So by focusing on RISP stats you are severely reducing the sample size you are evaluating. Chopping stats into small sample sizes leads to wonky numbers that can mislead us into erroneous conclusions. For example, we all know that the day of the week does not affect a batter’s swing. We would not expect the Reds to play any differently on a Tuesday vs a Wednesday vs a Saturday. 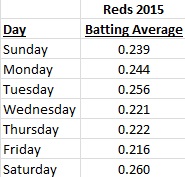 Should we use the data in the chart to conclude that the Reds are good hitters on Saturdays and are likely to continue hitting .260 on Saturdays for the rest of the season? Should we believe that the Reds have a “chronicÃ‚Â inability” to hit on Fridays? No, of course not. The data here doesn’t mean anything because we are talking about small sample sizes that represent a small percentage of the Reds total at-bats. By focusing on a small sample size, such as the 15% of their games they have played on Saturdays, we become vulnerable to being deceived. We have to decide whether or not the data show a true skill (ability to hit on Saturday) or if it is just a small sample size mirage. When it comes to days of the week we intuitively know that we are looking at a small sample size anomaly here. But AVG w/RISP works the exact same way. People (and Reds’ broadcasters) fail to recognize that AVG w/RISP differs from the team’s overall batting average for the same exact reason that the team’s Saturday batting average differs from their overall batting average: small sample size. Batting abilityÃ‚Â w/RISP does not represent a distinct skill that is different from overall batting ability. History has shown with startling clarity that major league hitters hit the same whether there are runners in scoring position or not. If you want to predict how the Reds will hit w/RISP the rest of the season you should predict they will hit the same as their overall batting average plus about 5 points. The Reds’ current overall batting average is .238, so we should expect the Reds to hit about .243 w/RISP from now until the end of the season. That prediction will not be spot on, but it will be a lot closer than their current .194 AVG w/RISP.

To answer the question I posed in the title, does it matter that the Reds have been awful w/RISP? The answer is no, not really. The Reds have hit very poorly with runners in scoring position this season. That is a fact. It does NOT mean they have a “chronic inability” to hit with RISP. In the future they are likely to hit w/RISP somewhere near their overall batting average, which is currently .238 for the season. The deviation of their AVG w/RISP from their overall battingÃ‚Â AVG is due to small sample size random fluctuation. Hitting w/RISP does NOT represent a separate skill set from hitting without RISP. The Reds have been much better at scoring runs than they have been at hitting with runners in scoring position. They have been able to create a reasonable numberÃ‚Â of scoring opportunities and they have hit a goodly number of extra-base hits. They still need to score more runs if they want to earn a playoff berth. They have improved their OBP and SLG significantly over last year, and that is why they are scoring more runs than last year despite nosediving w/RISP. Those improvements are nice but not good enough to be a legitimate contender. Their OPS ranks 16th in the majors, which is middle of the pack or league average. League average doesn’t win championships.

Usage of batting average as a tool to evaluate hitters is obsolete and marks the user as behind the times. CitingÃ‚Â AVG w/RISP as an important metric is an even more egregious misuse of misleading statistics to draw conclusions that are unsupported by the data. There are better tools available that will not lead to dubious claims and a belief inÃ‚Â things that have been disproven.

All statistical data provided by ESPN Trumedia and FanGraphs.