On November 28, 1966 the Reds acquired an itinerant 33 year old relief pitcher from the Braves in the Rule 5 draft. Ted Abernathy had already pitched for four teams with varying success at a time when the role of relief pitchers was rapidly changing. Little did the Reds know that they had just acquired a pitcher that in 1967 would post the highest bWAR of any relief pitcher in team history (Fangraphs ranks several Rob Dibble seasons as the best in team history). 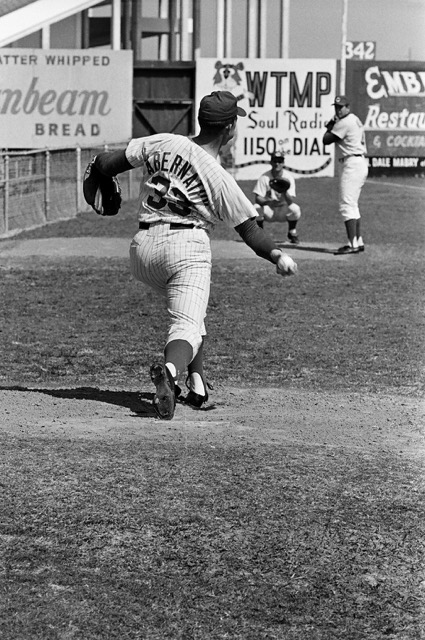 Ted Abernathy came up with the Washington Senators at age 22 in 1955 where he struggled as a swingman (14 starts/26 relief appearances). He had already adopted a sidearm delivery after a serious shoulder injury in high school, and he missed the entire 1958 season after an elbow injury. In 1959, he had an operation that saved his career. He later said in an interview with the Kansas City Star that Ã¢â‚¬Å“I was going to have to be a reliever, and a reliever with something unusual going for him is at an advantage. So I went to the submarine pitch, which I got from Dick Hyde, who was with Washington when I was on the clubÃ¢â‚¬Â.

Abernathy twisted his body to the right and threw the ball from the lowest point possible, sometimes scraping his knuckles on the mound. He threw a fastball, curve, and occasional knuckleball. At 6Ã¢â‚¬â„¢4Ã¢â‚¬Â and 215 pounds he was an intimidating pitcher, and it took an athlete to master such a complicated delivery. Chad Bradford’s delivery was the closest to Abernathy, but Abernathy threw harder (with worse control).Ã‚Â Ã‚Â Kent Tekulve, the long time Pirate relief ace, grew up in Cincinnati and copied Ted’s submarine delivery.

Ted had an advocate in the organization. Dave Bristol (who ascended to the managerÃ¢â‚¬â„¢s job at the 1966 All Star break) 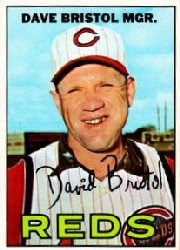 had played against Abernathy in Legion ball in North Carolina and was instrumental in his signing. In spring training, he talked up Abernathy as a potential relief ace, citing his durability and ability to get ground balls. And he turned to him immediately at the start of the 1967 season.

On Opening Day, he entered the game in the top of the 8th * with the Reds holding a 4-1 lead. He finished the game giving up a hit and striking out four to save the game for Jim Maloney. He added three saves in his next three appearances as the Reds got off to a 5-1 start. He had a hiccup in the April 18th game against the Dodgers when he surrendered 4 runs to the Dodgers in the 7th inning Ã¢â‚¬â€œ those four runs would account for 4 of the 15 earned runs he would give up for the year. He won or saved 5 of the next 7 games, and ended April with a win, 8 saves and a 2.04 ERA. The game of May 6th featured another hiccup Ã¢â‚¬â€œ Abernathy surrendered a 9th inning home run to the Braves Gene Oliver. It would be the only home run Abernathy gave up all year in 106 innings (he still got the save in a 4-3 Reds win).

* For younger fans it is important to note that there was a time in major league baseball when your best relief pitcher would actually appear in innings besides the ninth.Ã‚Â Ã‚Â  Since 2013, Aroldis Chapman has made seven appearances in the 8th inning. In 1967, Abernathy made his 7th appearance in the 8th inning on April 24th. 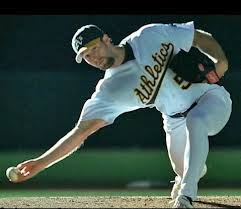 TedÃ¢â‚¬â„¢s early season heroics got the attention of Jerome Holtzman, a Chicago sportswriter that was campaigning for a stat to better measure the value of relief pitchers. Beginning in 1960, he created and tracked an unofficial save stat, and also did monthly write-ups in the Sporting News on a Fireman of the Year award for each league, based on relief wins + saves. Abernathy took the early season lead, and ended up winning the award in 1967.

Abernathy missed nearly three weeks due to pulled hamstring suffered running out a ground ball on May 26th; he returned on
June 13th and struck out 5 Mets in two innings.Ã‚Â Ã‚Â  From July until the end of the season he was pretty much untouchable Ã¢â‚¬â€œ 42 games, 66 innings, a 0.95 ERA and holding hitters to a .174/.243/.196 slash line. He finished the season with 21 scoreless appearances as the Reds faded out of the 1967 pennant race after leading as late as June 18th.Ã‚Â Ã‚Â  Injuries, a lack of offense (Rose, Perez, and Pinson were the only 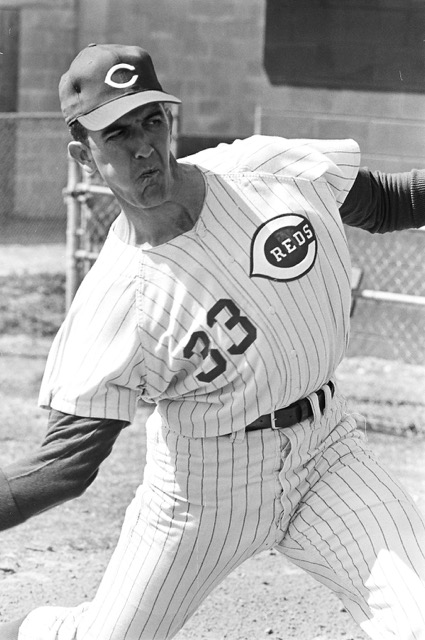 regulars to post an above average OPS+) and a 5-13 record against the Cardinals (sound familiar?) did the team in. They finished fourth** with an 87-75 record improving 11 games over their 1966 performance. The 1967 pitching staff was one of the best in team history (a 125 ERA+), with breakout performances by the 19 year old Gary Nolan and converted outfielder Mel Queen supporting hold-overs Jim Maloney and Milt Pappas. The bullpen of Abernathy (299 ERA+), Don Nottebart (197), Gerry Arrigo (120), and Billy McCool (111) was one of the best in team history.

**Ã‚Â  The top teams in the league shared in the World Series pool and The Sporting News reported that the Reds player shareÃ‚Â  was worth $465.38 for a full share.Ã‚Â  Johnny Bench, who joined the team in late August, only received a quarter share – $116.35.Ã‚Â

As for Abernathy, he posted a league leading 28 saves and 70 appearances despite missing three weeks for his hamstring injury. He made 42 multi inning appearances (Chapman has 25 in his career) and he entered the game with runners on 38 times (Aroldis has 36 such appearances in his career and only 11 since 2013). It wasnÃ¢â‚¬â„¢t a perfect season (Abernathy blew 6 saves for an 82% conversion rate), and his FIP was 2.30 vs. his ERA of 1.27. His 6.2 pitcher WAR tied him for fourth in the majors behind Jim Bunning, future Red Jim Merritt, and teammate Gary Nolan and the season ranks among the best 25 or so for the Reds (including starters). In 2001, Bill James rated AbernathyÃ¢â‚¬â„¢s 1967 season as one of the ten best of all time. 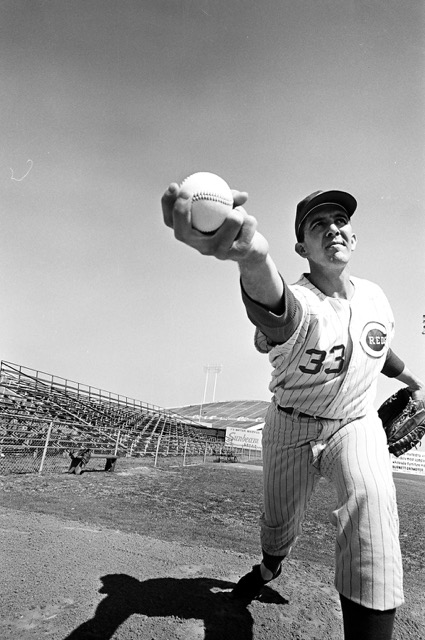 In 1968, Abernathy shared the relief ace role with Clay Carroll, who had been acquired in June from the Braves. He was still effective, and recorded 13 saves, a 2.46 ERA, and pitched 135 innings. At the end of the season, Bob Howsam traded Vada Pinson to the Cardinals for Bobby Tolan and Wayne Granger, and then sent Abernathy to the Cubs for three players. Granger and Carroll did a fine job anchoring the Reds pen in the early 70Ã¢â‚¬â„¢s. For the rest of his career, Abernathy continued to generate solid ERAÃ¢â‚¬â„¢s, kept the ball in the park, with decent hit rates. However, he lost his control of his complex delivery, making it hard for a manager to trust him. He retired in 1972 after another good year with the Royals; 3 wins, 5 saves, and a 1.70 ERA in 58 innings. He passed away in 2004 in his native North Carolina.

Jerome Holtzman got his wish Ã¢â‚¬â€œ in 1969 MLB made saves an official statistic. If was the first new stat since RBI became official in 1920. Little did Holtzman know that he created a scoring rule that a few decades later would influence how managers used (or misused)Ã‚Â their best relief pitchers, regardless of the game situation. Fortunately Ted Abernathy and the other relief aces of the 60Ã¢â‚¬â„¢s and 70Ã¢â‚¬â„¢s were not used in the current and sometimes self defeating ways.

Sources: The incomparable Baseball-Reference.com, Wikipedia, the excellent SABR Bio project written by Bob Hurte, The 1990 Baseball Book and the New Baseball Historical Abstract by Bill James, the Neyer/James Guide to Pitchers and the 1967 Sporting News. Abernathy photos courtesy of the Klumpe/Rhodes collection and the Reds Hall of Fame.