In sports, players and coachesÃ‚Â grumble about imperfect calls. American tennis great John McEnroe used to shout “You cannotÃ‚Â be serious!” at line judges and chair umpires to express his dissatisfaction with their calls. Lou Pinella would get in the face of umpires. Bobby Knight threw chairs.

While watching at home, the center-field camera provides a perfect opportunity toÃ‚Â critiqueÃ‚Â umpires from the comfort of our favorite lounging equipment. What begins with a grumble, Ã¢â‚¬Å“that was a strikeÃ¢â‚¬Â in the first inning very well may transition into a full-blown Ã¢â‚¬Å“THAT WAS A STRIKEÃ¢â‚¬Â in the later frames. DonÃ¢â‚¬â„¢t lie, weÃ¢â‚¬â„¢ve all been there.

The strike zone, however, is an elusive beast. While we like to believe that umpires are consistent in their zone calls, the data tells a much different story. The Hardball times ran an article back in 2010 where the authorsÃ‚Â found the strike zone was a third larger for 3-0 counts compared to 0-2 counts. They labeled this behavior Ã¢â‚¬Å“the compassionate umpireÃ¢â‚¬Â.

Over the last few years, however, the size of the zone has been expanding. While a larger zone is better for pitchers overall, it is not just the size of the zone that matters, itÃ¢â‚¬â„¢s also about the direction in which its expanding. As Nick wrote earlier thisÃ‚Â year, umpires called aÃ‚Â low strike 78% of the time in 2014 whereas those pitches were only called strikes 58% of the time in 2008.Ã‚Â These low strikes are more dangerous to hitters because they associated withÃ‚Â fewer flyballs (and homeruns) andÃ‚Â more ground balls:

But there is another, more hidden impact from the evolving strike zone.Ã‚Â  Since pitchers can now safely get strike calls lower in the zone, hitters canÃ¢â‚¬â„¢t afford to be as picky as they used to be. At constant risk of strikeout, batters are forced to make contact with pitches low down in the zone.Ã‚Â  When they do, the bat is more likely to swing over the ball, and drive it into the ground. As a result, groundball rates are increasingÃ¢â‚¬Â¦These grounders are not likely to end up as hits, either. In the age of the shift, groundballs are converted into outs more often than ever.

It is no secret that Major League Baseball is unhappy with the plunging run environment, and a recent Grantland article found the strikezone had decreased from 475 square inches in 2014 to 457 square inches in April 2015. This, combined with other factors, has had theÃ‚Â effect of an uptick in scoring from past years. But while the strike zone may be shrinking in the aggregate, areÃ‚Â the Reds are getting the benefit of a smaller zone? Here is the breakdownÃ‚Â for Reds right-handedÃ‚Â hitters 2015 called strike percentages (it is important to only use either left handed or rightÃ‚Â handed hitters because of umpire positioning) : 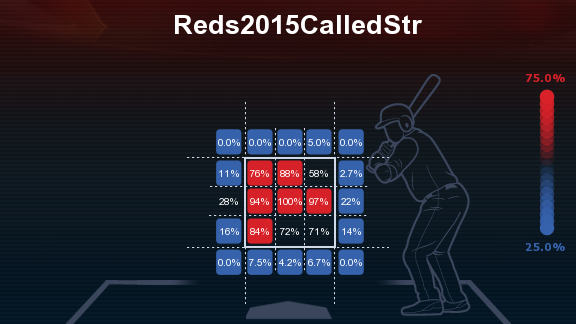 So which the of the Reds hitters are getting the calls and who’s getting rung up? HereÃ‚Â are some numbers on the 2015 Reds.

The Checks are Still Clearing:

With 11 home runs and zero called low strikes,Ã‚Â Toddfather must be living right in 2015. The umpires like to call the outsize strike against him, but this is not that unusual for right handed hitters. Overall, Frazier has been getting a lot of love from the boys in blue. 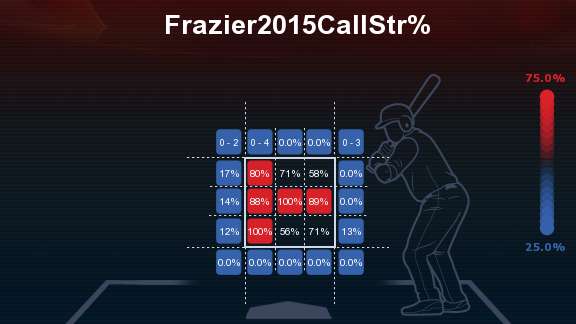 With only one low box registering a called strike, Zack Cozart is also getting a pretty greatÃ‚Â strike zone in 2015. The questionable calls Cozart is seeing are mostly belt high, which is good because he canÃ‚Â fight off those pitches. He also is getting the benefit of the doubt on some of the low-calls in the zone. 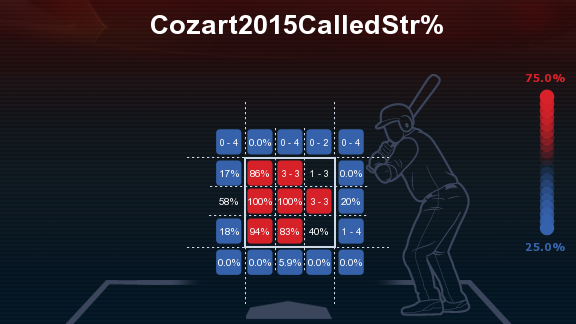 Not Too Shabby: Marlon and Brandon

Both ByrdÃ‚Â andÃ‚Â Phillips are seeing a fairly normal strike zone this year: a few low calls and a little bit outside, but nothing too egregious. Byrd is getting more high strikes called on him, but this may be due to Brandon’s compressed batting stance. 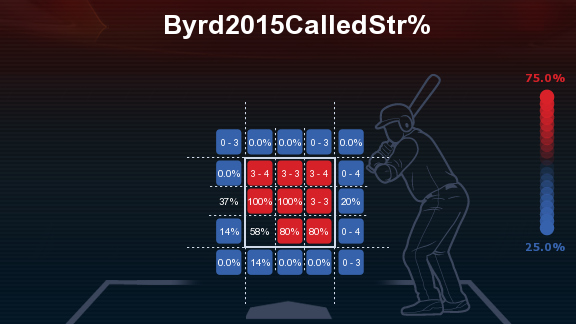 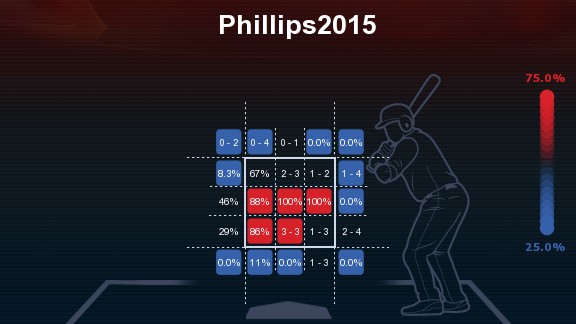 Due to his exceptional knowledge of the strike zone,Ã‚Â I thought that Joey Votto might get the benefit of the doubt from umpires. He doesn’t. For Votto, the zone is expanding in almost every direction, with the exception of down and in. 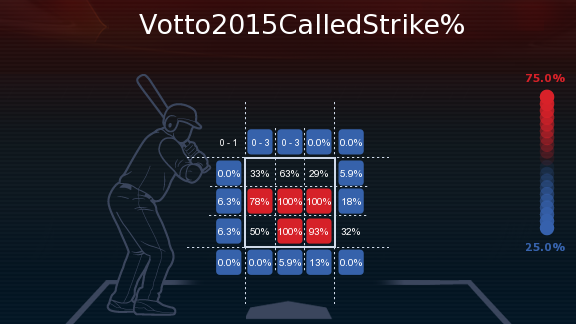 Not a pretty picture

Billy Hamilton is also suffering from a poor strike zone this year. He is getting rung up onÃ‚Â pitches down in the zone and outside, which are probably the worst calls for a lefty to receive. Like Votto, the “smaller strike zone in 2015” doesn’t seem to apply to Hamilton. 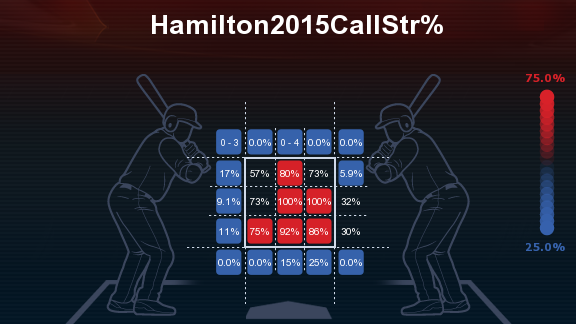 But, Jay Bruce, do you owe the umps money?Ã‚Â Bruce is experiencing low strikes across the board.Ã‚Â He is also getting badÃ‚Â calls outside of the zone. His aggregate strike zone is huge. 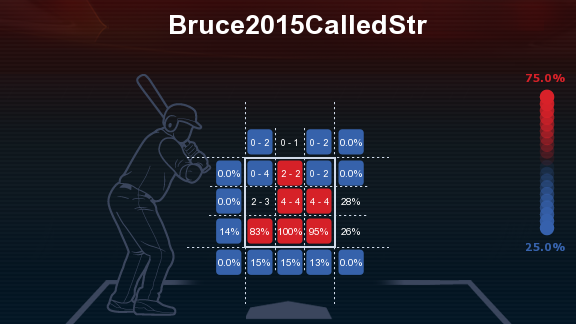 This is not to say that all of Bruce’s problems at the plate begin and end with the man behind the mask.Ã‚Â That’s not what Im saying. YetÃ‚Â when I look at Jay Bruce’s called strike hotzone (red areas are frequently called strikes against Bruce, blue are called balls) against left handed pitchersÃ‚Â for 2015: 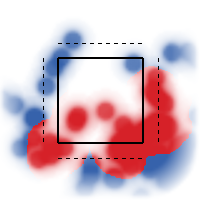 only one phrase comes to mind: You cannot be serious.