As of the conclusion of business Wednesday, the Reds had completed 16% of their 2015 campaign. Here are two of the more interesting story lines fromÃ‚Â this young season:

1. Zack Cozart, superstar? In 38 plate appearancesÃ‚Â in 2011, Cozart broke into the showÃ‚Â with a hot bat (122 wRC+) and slick glove. Yet from 2012 through 2014, Cozart had a hard time getting the bat on the ball, never recordingÃ‚Â above a 90 wRC+. Until this year. Through 100 plate appearances, our shortstop has hit more home runs than he did all of last year and is putting up 139 wRC+.Ã‚Â Is this sustainable?

When a player undergoes such a large swing in performance, one question always comesÃ‚Â up: is this due to random variation (luck)? Perhaps. CozartÃ¢â‚¬â„¢s career BABIP is .278 but this year is all the way up to .319. Most MLB aging curves suggest that hitters will peak when they are 23 or 24 and slowly decline in abilityÃ‚Â up till their age 30 season. After a playerÃ¢â‚¬â„¢s turns 30, they begin to decline more rapidly. Due to CozartÃ¢â‚¬â„¢s age (he turns 30 in August), this sudden increase in hitting prowess is unusual and probably unsustainable.

You can see the difference between CozartÃ¢â‚¬â„¢s 2009-2013 batted ball distance and his 2015 numbers in the following hot/cold charts (from ESPN/TrueMedia Networks): 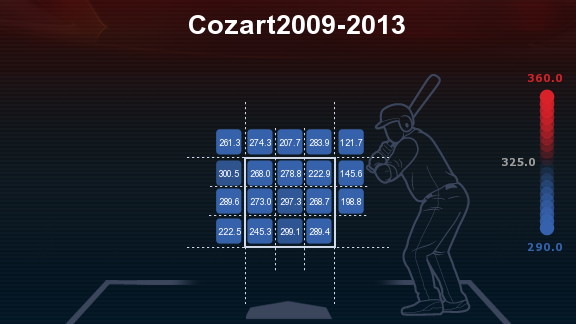 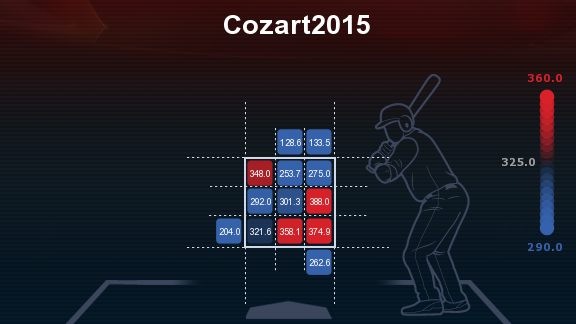 To be fair to Byrd, his xBABIP is .321, which means that he has been fairly unlucky givenÃ‚Â his batted ball profile. His wRC+ has rebounded from Ã¢â‚¬Å“unplayableÃ¢â‚¬Â to 72 in the last two weeks. After going nearly 80 consecutive at-bats without a walk, I thought this canary had keeled over in the coal mine. At the plate, Byrd seems to have woken up in recent weeks.

But Bryd’s performance at the plate is not what I want to talk about. Since most of us consume baseball via a glowing rectangle, we are unable to independently gauge playersÃ¢â‚¬â„¢ fielding abilities. This leaves us with less-than-satisfying defensive statistics. Defensive statistics are not as precise as hitting stats, but they are improving. Marlon ByrdÃ¢â‚¬â„¢s UZR/150 (defensive runs saved/lost, scaled to 150 games), -23.3, is more than concerning. His struggles at the plate are well known, but if Byrd’s UZR/150 is even remotely accurate, the Reds could be losing more value in the field than at the plate with their new left fielder.