The Reds have climbed a game over .500, and two straight wins over a division rival has the faithful feeling good. I love this part of the season. We have enough information to see the team’s foundation (and its cracks), but we can’t yet say for sure what this team will be. We are always looking for new clues to suggest whether the Reds will improve and make a run, settle into mediocrity, or crash to the depths of the NL Central.

Fangraphs has recently posted some really interesting new batted ball data. I’m not sure what to make of it all yet, but I am fascinated with it already. The first is a series of stats that show the percentage of batted balls a player pulls, hits to center, or hits the other way. These stats are called pull%, cent%, and oppo%. Pretty simple to understand. Ã‚Â Here is how the Reds starting eight sprays the ball around: 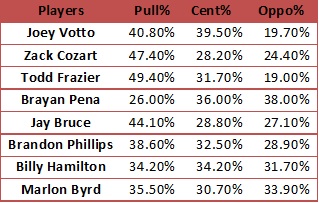 For instance, Brandon Phillips and Marlon Byrd have been productive hitting the other way in very different ways. Phillips has a .417 batting average on balls he hits the other way. He also has a .417 slugging percentage meaning he is getting plenty of base hits the other way while not hitting for much power. By contrast, Byrd has a .286 batting average when hitting to the opposite field, but his slugging percentage is .619. He hasnÃ¢â‚¬â„¢t gotten on base as much as Phillips hitting to right field, but Byrd has hit for much more power.

For a guy known strictly as a power hitter for the last few years, Byrd seems to have an oddly balance batted ball profile. He has hit the ball all over the field in 2015 with an OPS of .773 to the pull side, .708 to center, and .905 to right field.

Joey Votto hasnÃ¢â‚¬â„¢t hit the ball the other way as much as I thought thus far, but he destroys baseballs regardless of where he hits it. Before WednesdayÃ¢â‚¬â„¢s game, Votto had an OPS of 1.290 when pulling the ball, .900 when hitting to center, and 1.600 when hitting to the opposite field. Shifts beware.

This information is incredibly interesting. But again by itself, it doesnÃ¢â‚¬â„¢t tell us how hard a player hits the ball to different fields. Fortunately, we do have access to information to reveal that very thing.

FangraphsÃ¢â‚¬â„¢ other new series of stats tries to quantify how often a player hits the ball hard. They organize this data into three stats: Soft%, Med%, and Hard%. David Appleman, founder of Fangraphs, recently wrote a post explaining how these stats are calculated. To summarize, any batted ball type (ground ball, fly ball, or line drive) can be considered hard, medium, or soft. The batted balls are categorized as hard, medium, or soft based on batted ball type, hang time, and distance hit.

Here is how The Reds starting eight looks with a few notes to follow. 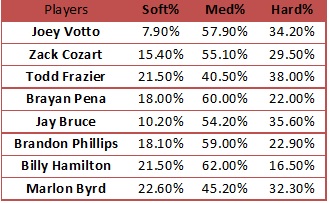 For the most part, these percentages align with what we might expect. The hitters with a better track record hit a larger percentage of balls hard (Frazier, Bruce, and Votto). For some reference, Paul Goldschmidt leads all of baseball in Hard% with 47.1%. Todd Frazier is the highest rated Red at 38%, and he ranks 21st. Chris Coughlin of the Cubs has the best Soft% with only 3.6% of his batted balls being categorized as soft. Votto has the fifth smallest percentage of softly hit balls, and Jay Bruce has the 18th smallest percentage of softly hit balls among qualified players in all of baseball.

Bruce has struck out too much to start the season, but when he hits the ball, he hits the ball as hard as anyone on the team.Ã‚Â  Outside of Votto, Bruce has the smallest percentage of softly hit balls. Whether his hard hit balls will ever turn into hits is another question.

Billy Hamilton hasnÃ¢â‚¬â„¢t hit the ball hard so far. While we know he isnÃ¢â‚¬â„¢t a homerun hitter, we would like to see him make harder contact to improve his chances of getting on base more. I know hitting soft ground balls gives him a chance to beat out infield hits, but he wonÃ¢â‚¬â„¢t survive in the majors beating out softly hit grounders.

We can also look at team data with these numbers. Unfortunately, this doesnÃ¢â‚¬â„¢t reflect well on the Reds. The Mariners lead all of baseball with a 33.3% Hard%. The Reds come in 25th at 26.5%. The Reds also have the 7th worst Soft% at 19.9%. The Reds arenÃ¢â‚¬â„¢t exactly hitting lasers, but they are in the middle of the pack for runs scored so far this season, so they have’t been a disaster by any stretch.

I donÃ¢â‚¬â„¢t know what this data really means yet, but I am excited to watch it as the year goes on. As Nick Doran wrote recently, the Reds low BABIP suggests they should start to hit better soon. This new batted ball data shows they have some players hitting the ball hard enough to produce at high levels even if the results havenÃ¢â‚¬â„¢t always been there.Ã‚Â Let’s hope that leads to more runs and wins for the good guys.