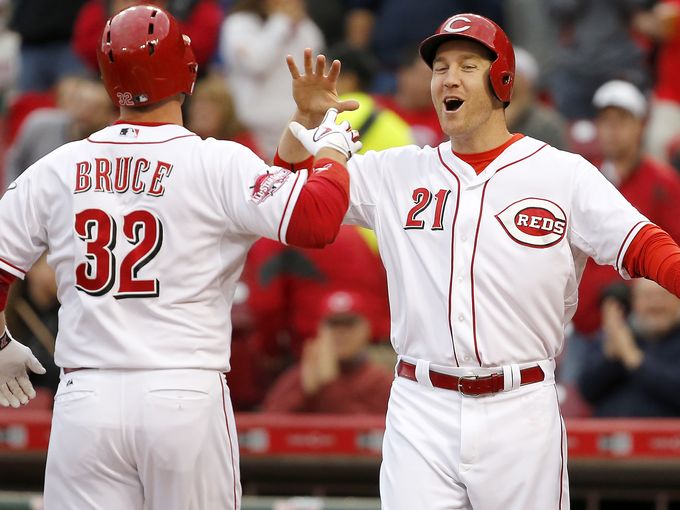 Two of the Reds’s best hitters, Todd Frazier and Jay Bruce, are both hitting below the infamous Mendoza Line. Those two and the rest of the Reds as a teamÃ‚Â have been the unluckiest group of hitters in the major leagues so far in 2015. The Reds’ have a paltry .253 BABIP on the season, which is dead last out of the 30 MLB teams. Some might say that is because the Reds can’t hit. It is true that hitters do have some degree of control over their BABIP scores but a score that low is a very strong indicator the Reds have simply run into an extended string of bad luck. The good news is things will get better soon. Read on to find out why.

BABIP is an acronym for Batting Average on Balls In Play. It is a well-established statistic that measures a player’s batting averageÃ‚Â when he puts the ball in play without hitting a home run. Home runs do not count because the defense does not have a chance to field them and therefore it is not a ball “in play”. Strikeouts, walks, hit-by-pitches and catcher’s interference do not count either because the ball was not put in play. The statistic is an accurate way of determining whether or not a hitter has been disproportionately helped or hurt by the opposing defense. Has he been getting robbed by great defensive plays? Has he been hitting a lot of hard shots that ended up going right at the fielders? Has he benefited from a lot of weakly hit bloopers or swinging bunts falling in for hits?

If you see a hitter with a career .325 BABIP who is currently sporting a .225 BABIP it is a strong sign that he has been unlucky and will soon start to see better luck as well-hit balls begin to fall for hits instead of being caught. If a hitter with a career .260 BABIP suddenly starts hitting for a .360 BABIP you can be sure that he has been very lucky and will soon see his poorly-hit balls find leather instead of grass.

BABIP is both a pitching and a hitting stat. It turns out that pitchers have very little control over the BABIP they allow no matter how good or bad they are on the mound. The major league average BABIP is .295 and all pitchers, including Hall of Famers and replacement-level players, will all have career BABIPs very close to that number given a large sample size. That is why we have learned that strikeout rates, walk rates and home run rates will tell you 95% of what you need to evaluate a pitcher’s true skill level. The pitcher’s team defense, ballpark and his own fielding ability have much more impact on his BABIP than his pitching ability does. People find that tough to accept, but it is true. If a pitcher allowsÃ‚Â a BABIP higher than .295 you can expect it to fall in the future (regress to the mean in math-speak), and if his BABIP is less than .295 you can expect it to rise. Note, if a pitcher’s team fields a very strong or very weak defensive unit it will alter the expected .295 baseline (see more on that in the Bonus Section below).

Unlike pitchers, batters do have quite a bit of control over their BABIP. Batters who hit a lot of line drives can maintain high BABIPs for their careers. Fast players also tend to beat out more infield hits and put up good BABIPs. Players who hit a lot of fly balls tend to put up lower BABIPs. The average BABIP is .295 but they can range from a high of around .370 to a low of around .250 for hitters. BABIPs tend to stabilize early in a hitter’s career based on his batted ball profile (how many line drives, grounders and fly balls he hits). We saw with pitchers that you can compare the BABIPÃ‚Â they allowÃ‚Â to the league average of .295 to see if they haveÃ‚Â been lucky or unlucky. With hitters you don’t compare their BABIP to the league average, you compare it to their own personal career average. If the hitter’s BABIP differs significantly from his career BABIP you can expect it to regress toward the career average in the future. 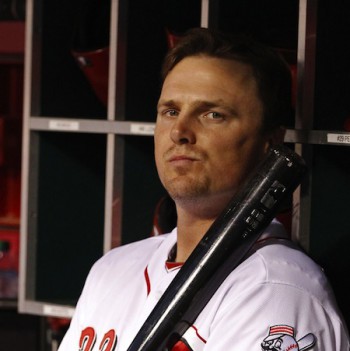 For example, Jay Bruce’s career BABIP is .291 but his BABIP this year is only .192, so we should expect it to improve drastically as the season rolls on. He has simply been very unlucky so far this year. His batting average is a woeful .181 right now, but much of that is because of his unfortunate BABIP. When the BABIP returns to normal his batting average will climb to the .240 range as a result. His low batting average makes us think he has been pathetic at the plate, but in reality he has been victimized by a lot of hard-hit balls being caught. This is a trend that has hurt much of the Reds team as you can see here…

The chart shows us that Votto is right on his career average. No luck there. Pena has been quite lucky, especially considering he is a very slow runner. Phillips and Cozart have been a little fortunate. Hamilton has been very unlucky. Byrd, Bruce and Frazier have been cursed by the BABIP gods in epic fashion, all are at least 100 points below their career average. That is a really good sign because we should expect much better results from those three middle-of-the-order bats as the season progresses.

Here we can see that the Reds have been extremely unlucky on their balls in play. The Reds are 42 points below the league average and 83 points below the league leaders. If they can work their way up close to league average it will go a long way toward helping them score more runs and win more games. There is no reason to expect the Reds to continue to see such a low BABIP. For perspective’s sake, the lowest BABIP in baseball last year was .277 by the Padres and the highest was .326 by the Rockies. The teams at the top of this list will move down closer to .295, while the teams at the bottom will move up closer to .295. One month of BABIP numbers is still a very small sample size subject to the whims of random fluctuation. As the sample size grows larger the gap between the top and bottom will narrow. The Reds will ride that rising tide.

Here is how the Reds BABIP has varied over the last several seasons:

The Reds are currently 31 points below their team BABIP from last year, which was 27th in the league. So even though they were near the bottom of the league they were still much better than this year. With Joey Votto back in peak form the team BABIP should be higher than it was last year. To see just how quickly the vagaries of BABIP can flip, look at 2009 and 2010. They went from dead last in the league in 2009 to the best in the league in 2010 with essentially the same players. It goes to show that BABIP can vary a lot due to luck, chance, randomness, fortune or whatever else you want to call it.

The moral of the story is that the Reds’ hitters as a team have been snakebitten this year. They have seen a lot of well-hit balls get caught for outs; and have not seen many bloopers and dribblers fall in for hits. The winds of fate will change soon, leading to more hits and runs for the Redlegs. It does not require any change in approach, lineup construction or personnel. If the Reds simply keep doing things exactly the way they have been they should see improved results as their BABIP regresses to the mean in positive fashion.

I had planned to discuss only the hitters’ BABIP in this article, but decided to add on this section about the pitchers’ BABIP as well…

Just in case you were wondering, Reds pitchers have benefited from a very low .262 BABIP this season, which is 5th lowest in the league.

This chart shows that ever since 2009 the Reds have consistently allowed very low BABIPs to opposing hitters.Ã‚Â This year’s low .262 BABIP is not sustainable but it is not aÃ‚Â surprise that they are close to leading the leagueÃ‚Â because the Reds have allowed very low BABIPs in each of the last several years. This does not have much if anything to do with the quality of the pitchers however. The reason Reds pitchers allow such low BABIPs year in and Ã‚Â year out is because of the excellent team defense. The Reds had the highest-rankedÃ‚Â defense in the majors last year according to most metrics and have been one of the most elite defensive teams for a few years now. You will notice the stark contrast between 2007-8 and 2009-15. What happened at that time to account for the difference? The team shed terrible defenders like Adam Dunn, Ken Griffey Jr, Edwin Encarnacion, Felipe Lopez etc and replaced them with the excellent defenders we have now. Lo and behold the pitching BABIPs nose-dived. No coincidence there. The Reds have Gold Glove contenders at almost every position on the field. Even the pitchers field their position well. That makes a big difference on how many hits the Reds’ pitchers allow; and it certainly shows up in the team BABIP numbers.