Johnny Cueto and the Reds got off to a tough start on Sunday afternoon, and could never recover. Cueto allowed three runs in the first inning, with two of them coming off a home run by Kelly Johnson. Despite being hit hard and often in the game, Cueto held the Braves in check for the most part following the first inning.

The Reds offense couldn’t do anything against Julio Teheran, mustering just three hits, and were held scoreless in six innings. The Reds had to settle for a split in the four game series in Atlanta to start the road trip. The Reds failed to get above .500 for the first time since April 15th, and are now 12-13 on the season. 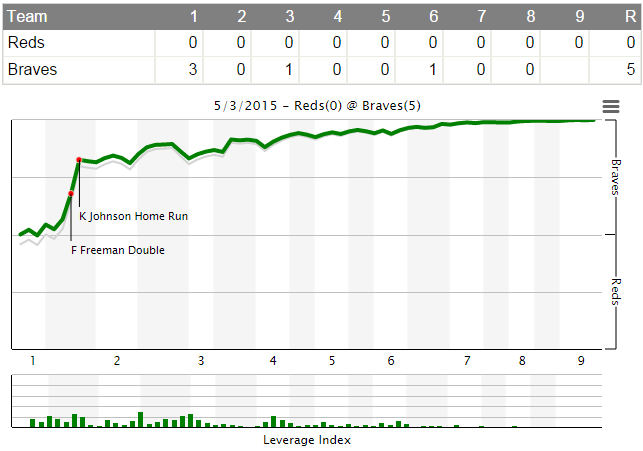 According to FangraphsÃ‚Â WPA statisticÃ‚Â (winning percentage added), the most important play of the game was Johnny Cueto allowing a 2-run home run to Kelly Johnson in the first inning.Ã‚Â That gave the Braves a 3-0 lead, and decreased the Reds chances of winning by 14.8% (from 32.1% to 17.4%)

Players of the Game

Joey VottoÃ‚Â reached base twice (a walk and a hit).

Brandon PhillipsÃ‚Â walkedÃ‚Â twice today! It was his third and fourth walks of the season.

Johnny CuetoÃ‚Â had a rare bad afternoon. Cueto allowed three runs in the first inning, and just really could never recover. The Braves (yes, the Braves) for whatever reason just had his number. They were drilling balls all afternoon off Johnny. Cueto entered the day with a .211 BABIP, so he was due for a little bit of regression there. I just certainly didn’t expect Cueto get hit as hard as he did. His line on the afternoon: 6.0 IP, 9 H, 5 ER, 1 BB, 2 K, 2 HR.

Julio TeheranÃ‚Â continued his domination over the Reds. Last season, Teheran didn’t allow a run in 14.0 innings against the Reds.

Zack CozartÃ‚Â left the game in the 4th inning with a finger injury on his right hand. It was hit attempting to field a ground ball. It looked like Cozart’s right index finger was bleeding. The good news is that the Reds announced that the X-rays on Cozart were negative. 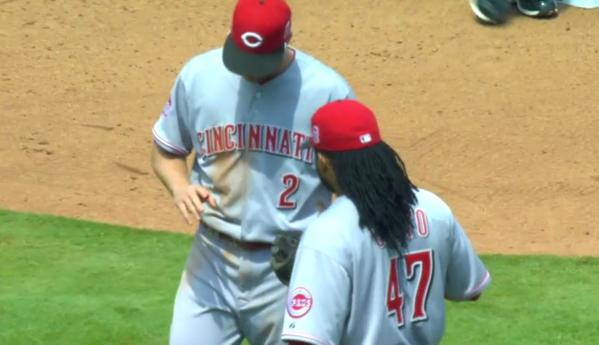 Good TV and radio broadcasters are really hard to come by. I got the “honor” of watching the Braves broadcast this series (Chip Caray, Joe Simpson), and boy were they rough to listen to. If they weren’t beating into the ground RISP stats, going on and on about player leadership, or singing the hallelujah chorus over a successful bunt,Ã‚Â Chip Caray was making your ears bleed with his painful style of broadcasting.Ã‚Â It was really hard not to hit mute. That is why boys and girls you should really treasure the great MLB broadcasters like Vin Scully, Dick Enberg, and Jon Miller.

An interesting thought: The Reds non-tendered Chris Heisey this off season to save around $2 million this year. The Dodgers picked him up, and because they have a crowded outfield, he is sitting in AAA. So how is Heisey doing? Well, he has a .969 OPS and 7 HR in just 17 games. It is hard to believe that Heisey wouldn’t be a better 4th OF option than Boesch or Schumaker right now. Oh, and if you think $2 million is all that much money to the Reds, they are paying Kevin Gregg $1.5 million this year.

Johnny CuetoÃ‚Â is 2-3, whileÃ‚Â Jason MarquisÃ‚Â is 3-1. If there was ever an example of why wins and loss are a really, really bad way to evaluate a pitcher, here is one.

Cardinals are trying to complete a sweep over the Pirates, and are up 1-0 in the 7th.

Cubs and Brewers are tied at 3 in the 7th.

The Reds have their first scheduled day off since April 16th tomorrow. Then they will travel to Pittsburgh to begin a three game series with the Pirates on Tuesday evening at the lovely PNC Park.