This picture is a standard MLB aging curve (using wRC+, full chart here) and Jay Bruce. Anyone who has been paying attention over the past two years knows which line represents which. 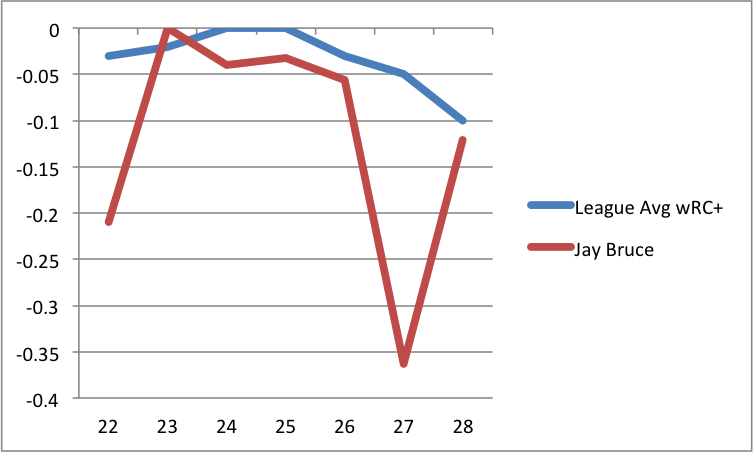 As you can tell, I think one of these stories makes sense and the other is incoherent. HereÃ¢â‚¬â„¢s why:

Bad hitters donÃ¢â‚¬â„¢t collapse in their prime, either.

By the time players have reached the major leagues, hitters had to prove their skills in thousands of minor league at-bats. TheseÃ‚Â players are a known commodity andÃ‚Â follow a fairly normal progression as they age.

It is not just the new-school stats that support Jay Bruce, either.Ã‚Â In 2012 and 2013, Jay Bruce won the Silver Slugger award as the best hitting right fielder in the National League. Managers and coaches vote on this award, so Bruce is not just impressing the stat-kids.

With all those extra base hits, Bruce was averaging 102 RBI a year. That’s three years of thirty home runs and over 100 RBIs. The only other guy in the NL to do that was named Stanton, and Miami just paid him the GDP ofÃ‚Â a small country to play baseball for them.

Then Bruce injured his right knee.

Jay BruceÃ¢â‚¬â„¢s performance in 2014 was terribleÃ‚Â (-0.4 fWAR), he will tell you as much. But this was due to rushing back from injury. For the first month of the season, Bruce was putting up between 100 and 111 wRC+, just below what we would expect from his age and previous track record. He was probably playing with his injury in some of these games.

After his return, he hit much worse than his career line, 73 wRC+.

The injury he sustained, a torn meniscus in his right knee, usually takes 4-6 months of recovery. Keep in mind this is his weight bearing knee when he swings.

Bryan Price said that Bruce would not be fully healed until after an offseason of rehab. Rushing him back without a rehab stint didnÃ¢â‚¬â„¢t help Bruce heal in 2014 and delayed his recovery.

At the end of the game on Wednesday, Bruce is at 109Ã‚Â wRC+. This is a little low for him, but it is close to whatÃ‚Â we would expect him given his previous performance. Even if he doesn’t improve, he is still on pace to hi 38 home runs (and it is easier to hit home runs when the weather warms up, so this is not as unsustainable as you might think) and knock in 92 RBI.

But there is reason to believe he will improve. That small gap between what we would expect of him and his current performance can be explained by luck.

A big part of this is due to random variation in his BABIP. For his career (including his terrible 2014 year), Bruce had a .291 BABIP. The four years before his injury, Bruce had a .311 BABIP.

Unlike pitchers BABIP, hittersÃ¢â‚¬â„¢ BABIP converges around their career-average, not a league-average.

This year, Bruce has a .211 BABIP. If you calculate his xBABIP (expected BABIP based on BruceÃ¢â‚¬â„¢s batted ball profile, this is a fairly well established measurement) he should have a .339 BABIP. Even had he just hit his career average BABIP, Bruce would have a .350 on-base percentage.

Now, the Bruce-ran-over-my-dog crowd will counter that the reason why BruceÃ¢â‚¬â„¢s BABIP is so low is because of the shift.

LetÃ¢â‚¬â„¢s put aside that there is no evidence that the shift has influenced BruceÃ¢â‚¬â„¢s batting average in the past and actually entertain this argument. Could the shift plausibly depress BruceÃ¢â‚¬â„¢s BABIP by over 100 points?

No. Although there is emerging evidence that the shift has an effect, that effect size may not be that large:

Some of what we’ve learned isn’t surprising. For one thing, baseball can breathe a sigh of relief: Overall, the shift works. Shifts have saved a net of 390 hits this season through Monday. If we were to add those 390 hits back into the grand total, the overall MLB batting average would rise to .254 from .252Ã¢â‚¬â€a significant increase considering we’re talking about 146,785 at-bats.

This article argues that people over attribute the influence of the shift because viewers forget that fielders are quite good at turning ground balls into outs. Fielders have always made adjustments around the diamond for hitters; the shift is just a more dramatic defensive alignment.

At the same time, however, it is still possible that the shift depresses Bruce’s batting average. Yet even if this happens,Ã‚Â Bruce is providing plenty of value other ways. First, the shift does not change his power numbers, where much of his current value is derived. Second, he is walking more this year (15.0 BB%) than he has in the past (9.5% career).

No matter where the thirdÃ‚Â baseman stands, they can’t stop Bruce from walking to first or trotting around the base paths.

There is other encouraging news as well: Bruce’s pitch-selection stats (which stabilize before hitting line stats) are back to his 2010-2013 form.

Bruce does have a higher swinging strike rate than he had in his prime, but this is normal for an aging hitter. No one is arguing that he is as good as he was in 2010. We expectÃ‚Â him to regress as he ages.

Despite this, the long view of Jay Bruce is a good one. If Bruce follows the same aging curve as other players, we should expect to see him put up 112 wRC+ this season, followed by 108, 104 and 99. If he manages to perform better than average, which he might given his talents at the plate, then he might still put up 4 to 5 win seasons for the Reds.

The reason why I have been so flippant towardÃ‚Â the “Bruce is a bust” crowd in this post is because I just don’t believe there is a plausible alternative explanation for Bruce’s performance over the past few years.

If not his injury, then why did Bruce follow the *normal aging progression* inÃ‚Â the beginning of his career but thenÃ‚Â unexpectedly decline?

Also, why did that alternative factor largelyÃ‚Â disappear the following year?

Jay Bruce is not going to be anÃ‚Â MVP candidate (anymore, anyways. He did put up a 5.1 fWAR season in 2010). ButÃ‚Â heÃ‚Â will veryÃ‚Â likely continue to be an above league-average hitter until the end of his contract with the Reds.

The Reds have many problems. Jay Bruce isn’t one of them.